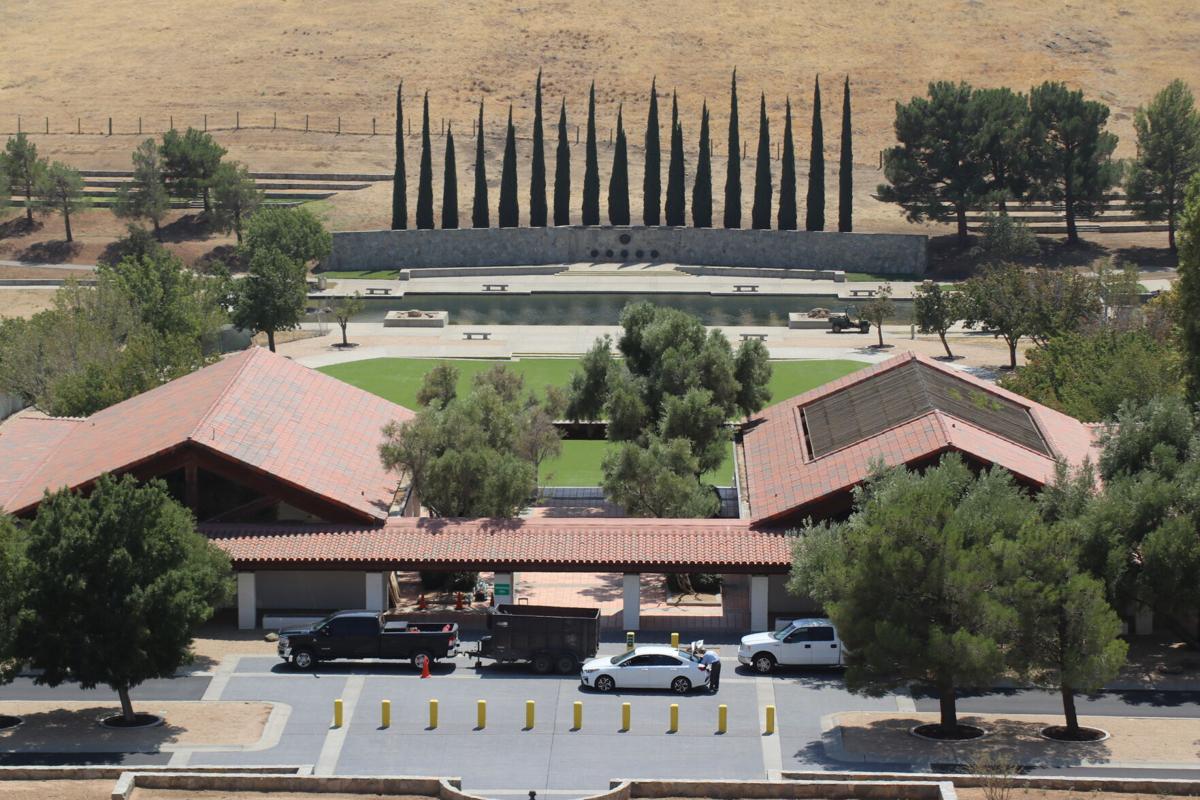 The San Joaquin Valley National Cemetery, nestled in the foothills near Santa Nella,  is a peaceful  resting place for those who served. 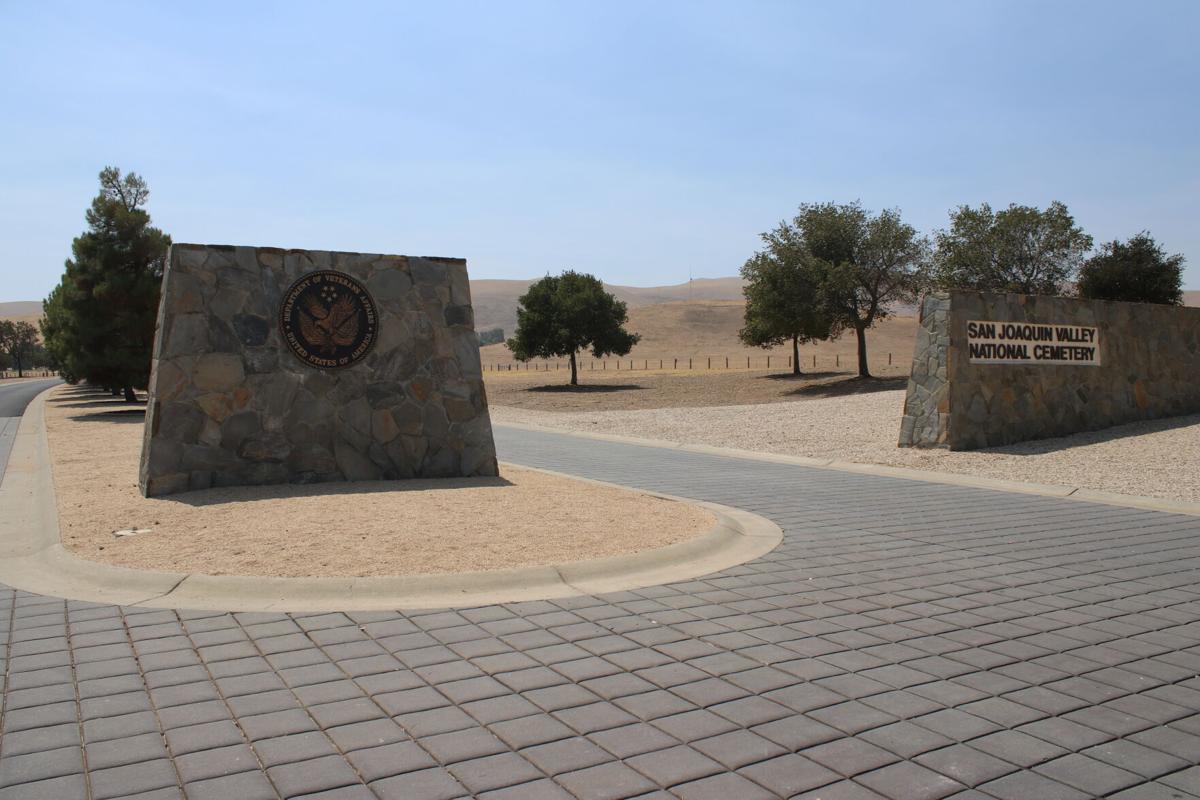 The entrance to the San Joaquin Valley National Cemetery is pictured.

The San Joaquin Valley National Cemetery, nestled in the foothills near Santa Nella,  is a peaceful  resting place for those who served.

The entrance to the San Joaquin Valley National Cemetery is pictured.

At a spot in western Merced County where the flatness of the San Joaquin Valley gently begins lifting into the soft golden foothills of the western coastal foothills is nestled an expansive carpet of green. Miles from the din of I-5 traffic is the tranquil final resting place of warriors. Some marched on foreign soils with weapon in hand during battle, or parachuted onto European farms and rode on tanks to stop Hitler. Others braved the cold of the Korean Conflict or the intense heat in Afghanistan. Some trudged through the steamy jungles of Vietnam, sailed the high seas or served on the homeland in defense of America.

Although the San Joaquin Valley National Cemetery (32053 McCabe Road, Santa Nella) is a fairly recent addition to Central California, as of Aug. 30 it is populated with the caskets and cremains of 47,451 former military personnel or family. An average of five new burials occur daily, some quietly and others sent off with a 21-gun salute and the playing of taps during military funerals.

The cemetery doesn’t get a lot of visitations outside of family members who drop by to visit gravesites of loved ones. Director Frederick Bryant acknowledges that many folks in the 209 are unaware of the cemetery since the grounds are tucked away remotely from view of I-5. Traffic is expected to increase once the cemetery completes a $3 million concrete columbarium burial plaza with more than 3,500 niches, walkways, and overhead trellis to shield visitors from the sometimes brutal heat. The addition will also have room for 7,000 in-ground cremation spaces.

The Romero Ranch Company donated over 100 acres in 1989 for the first-phase of the cemetery. To keep the park green, a water pumping station was constructed to tap into the nearby California Aqueduct in 1992. Today the cemetery occupies 300 acres of California landscape.

In 1998 the cemetery became home to the California Korean War Veterans Memorial. Its 16 five-foot granite monoliths are arranged in a circle and engraved with the names of the 2,495 Californians  who gave their lives fighting in the Korean War.

There is also a small military museum on site, which has exhibits of uniforms, medals, and other memorabilia.

Visitors are often compelled to take the short road to the top of a barren hill to get a panoramic view of the cemetery. A sign cautions all that rattlesnakes have been known to appear on occasion.

To be buried at the national cemetery, a decedent had to be a member of the armed forces who have met a minimum active duty service requirement and discharged under conditions other than dishonorable. Also eligible for burial here are veterans’ spouses, widows or widowers, minor dependent children, and under certain conditions, unmarried adult children with disabilities. Eligible spouses and children may be buried even if they predecease the veteran. Members of the reserve components of the armed forces who die while on active duty or who die while on training duty, or were eligible for retired pay, may also be buried here.

There will be no Veteran’s Day observances this year because of COVID-19 restrictions other than those who will be visiting graves privately. However, organizers are planning to hold a National Wreaths across America Day ceremony at 9 a.m. on Saturday, Dec. 18.

Wreaths across America began 30 years ago when Maine tree grower Morrill Worcester produced an abundance of wreaths and didn’t want them going to waste so he arranged for them to be placed on graves at Arlington National Cemetery. It’s become a holiday time tradition. Last year more than 1.7 million wreaths were placed on veterans’ graves at over 2,500 locations around the country,  in honor of the service and sacrifices made for freedom, with the name of each fallen service member said aloud. The event is intended to honor the dead and educate newer generations of Americans that freedom comes at a price.

Blue Star Mom Gaylene Ramos of Turlock helped to organize the first Wreaths program at the San Joaquin Valley National Cemetery in 2006 when 100 wreaths were sponsored.

“What’s really hurt us the last two years is the fact that we were not able to have a Memorial Day ceremony (because of COVID),” said Ramos. Prior events gave her an opportunity to promote the program and pass out order forms.

While individuals are invited to sponsors wreaths, local veterans group also get involved with fundraisers to buy the live wreaths, which measure 22 inches in diameter.

“The VFW and Auxiliary for Oakdale, they are one of the biggest contributors to the Wreaths across America program.”

Ramos estimated the Oakdale club raised about $7,000, mostly from a skeet shoot competition and desert sales, to buy 471 wreaths.

The Coulterville VFW held a raffle in 2019 to raise enough funds to sponsor approximately 200 wreaths.

Barring any unforeseen changes to restrictions relating to COVID, the ceremony will return. The ceremony includes speeches around seven ceremonial wreaths on stands to represent the various armed forces. Representatives of each branch or Gold Star parents who have lost family members are invited. Ramos typically invites Richard and Cathy Wood, the parents of Justin Wood, who became the cemetery’s first military casualty burial. The Downey High School graduate in Modesto and 20-year-old airman was killed in the June 25, 1996 bombing of Khobar Towers in Saudi Arabia.

Ramos is sympathetic about the plight of the servicemen and women who return home and struggle to emotionally deal with war time experiences.

“There are a few veterans who are buried out there due to suicide because when they came home it was rough on them. Those are the ones that hit me in the heart.”

Anyone may get involved by sponsoring a wreath at $15 apiece or volunteering to place wreaths on veterans’ graves at the Santa Nella cemetery. A wreath can be specified for a specific veteran grave or another grave based on need.

“This year will be a key celebration since it’s been 30 years for them to be able to do this,” said Ramos.

The last day to buy wreaths online is the first Monday after Thanksgiving.

“We are always looking for people, businesses and organizations that want to get involved,” said Ramos. “I would like to cover every grave out there.”

For more information on Wreaths across America, visit wreathsacrossamerica.org

Volunteers are always welcome to show up to help place wreaths on graves.

“In 2019 we probably had over a thousand people there,” said Ramos.