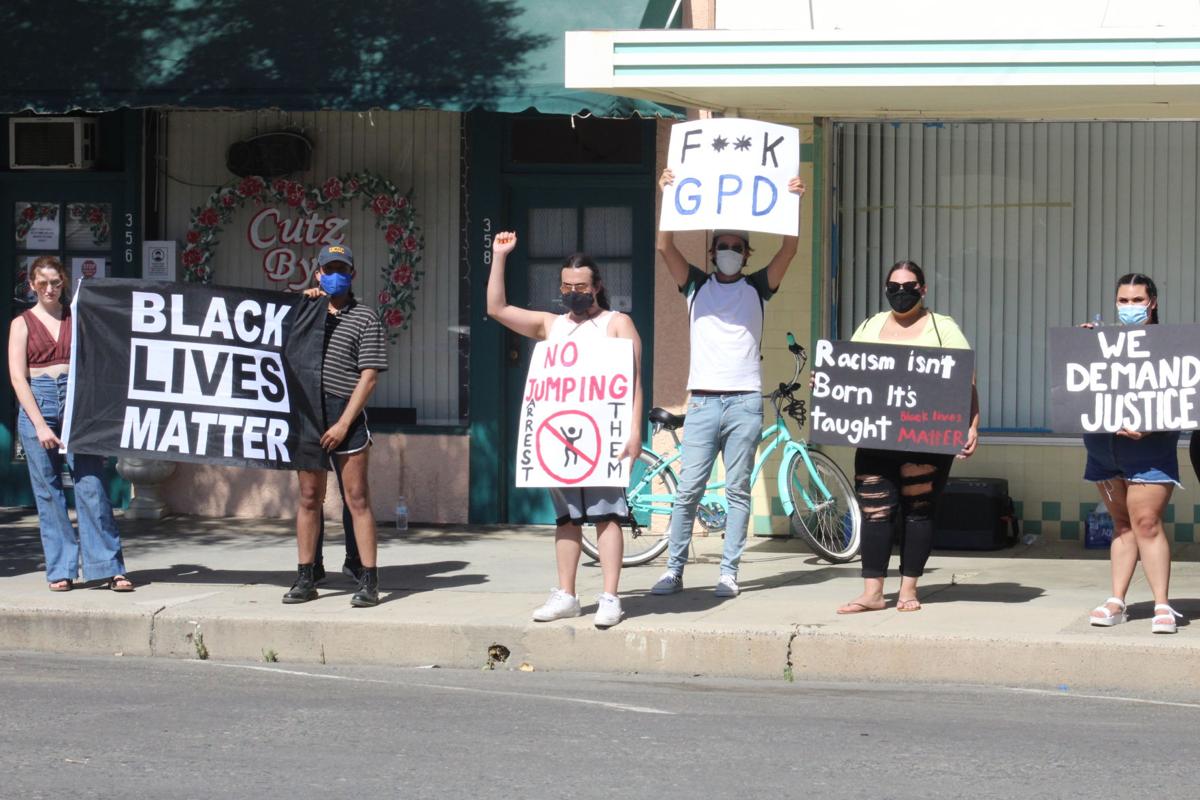 A group gathered Monday in downtown Gustine to show their support for Black Lives Matter and in protest of the law enforcement response to an altercation which occurred Sunday between a small group of Black Lives Matter supporters and a group gathered to show support for police and first responders. No arrests were made Sunday. Police said a report on the incident will be submitted to the district attorney’s office for review and consideration of charges. 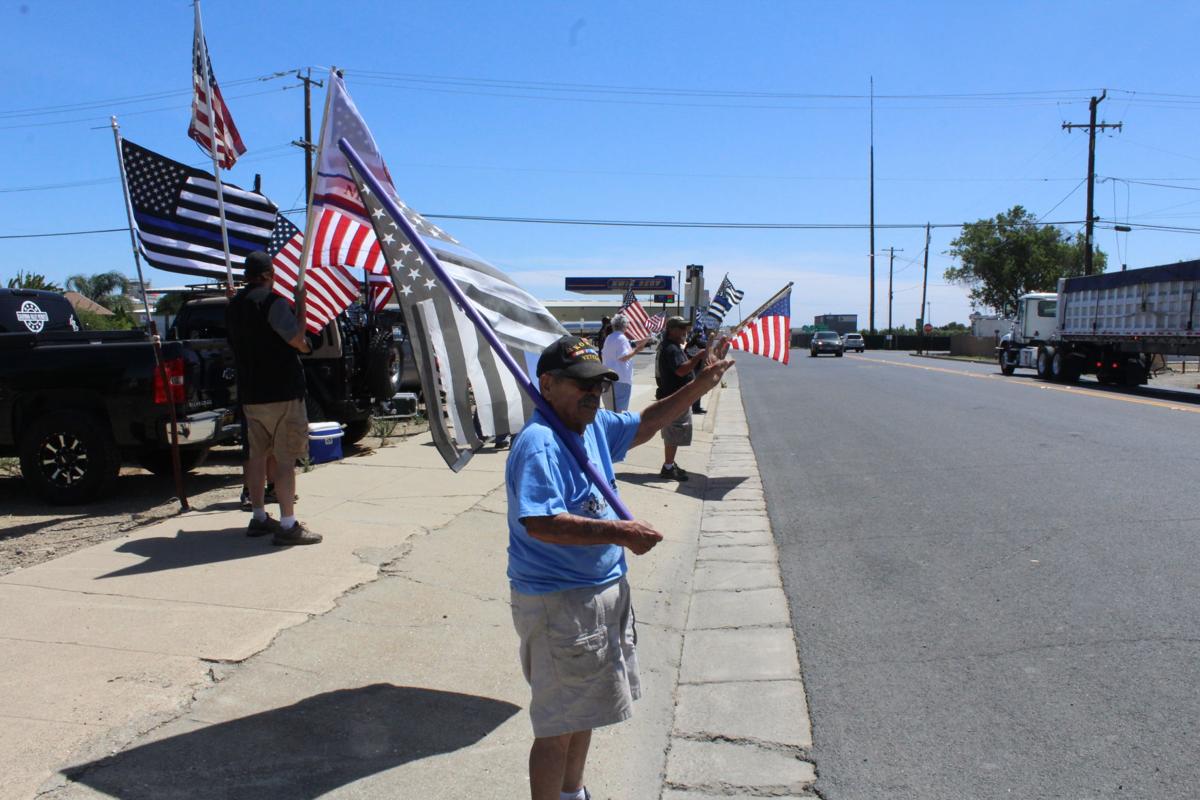 A group gathered Monday in downtown Gustine to show their support for Black Lives Matter and in protest of the law enforcement response to an altercation which occurred Sunday between a small group of Black Lives Matter supporters and a group gathered to show support for police and first responders. No arrests were made Sunday. Police said a report on the incident will be submitted to the district attorney’s office for review and consideration of charges.

GUSTINE - Two groups were involved in a Sunday afternoon altercation between those gathered in a rally to show support for law enforcement and first responders and others who turned out to voice support for the Black Lives Matter movement, authorities said.

Two people who said they were part of the pro-law enforcement/first responder group gathered on Highway 33/140 at the south end of Gustine’s downtown business district said a small group of  counter-protesters instigated the incident.

They told Mattos Newspapers that a small number of counterproters had gathered on an opposite street corner and then crossed the street to confront those present in support of law enforcement.

“It was totally out of hand,” said one member of the group supporting law enforcement/first responders. “They came across and instigated the issue.”

Efforts by Mattos Newspapers to reach those thought to have been part of the Black Lives Matter group were unsuccessful. Partial videos of the incident and its aftermath posted on Facebook placed the blame on the pro-law enforcement group. In one, a person is heard complaining to a police officer that they had been jumped by members of the pro-police group and that law enforcement was taking no action.

A group of about 10 sign-carrying demonstrators gathered Monday in downtown Gustine in support of the Black Lives Matter movement and to protest the police response to the Sunday incident.

No one was arrested in the wake of Sunday’s altercation, police said, but investigation into the incident is ongoing.

“The problem is that there is a lot of finger-pointing, so we have to figure out what was done,” said City Manager Doug Dunford. “We weren’t there; we didn’t see it.”

Dunford said he viewed a social media video capturing a portion of the altercation, but said he “would like to see the whole video and see what is being said and how things progressed.”

Joseph said Monday that authorities have determined that the Black Lives Matter supporters crossed the street to confront the pro-law enforcement group, but were still investigating how the incident escalated from that point into an altercation involving members of each faction.

He said the responding officer, who was assisted by a unit from Newman, arrived after the altercation had been broken up and focused on separating the two groups.

Joseph said officers followed appropriate policy. The small number of Black Lives Matter supporters were placed in a patrol car solely to separate the groups, he told Mattos Newspapers, and nobody was handcuffed or arrested.

He said authorities plan to review surveillance footage from a nearby business to get a clearer picture of what transpired.

Joseph said a completed report will be submitted to the district attorney’s office for review and consideration of charges.

Gustine Police Chief Ruben Chavez emphasized Tuesday that the investigation remains open. The department, he said, supports the rights of all who wish to express themselves freely but does not tolerate violence.

He said investigators are looking for any sort of video or audio recording of the incident. Chavez stressed that videos must not be redacted or edited, so that investigators have a complete picture of what transpired.

Videos may be submitted to the Gustine Police Department or to the Merced County District Attorney’s office, Chavez told Mattos Newspapers.

“These are emotional, charged events on both sides. We like to get to the bottom of it and see what occurred,” he commented.

Gustine was previously the site of a Black Lives Matter protest which was held without incident. In that case, Chavez said, the department worked with organizers to support and monitored the proceedings.

Due to short-staffing, he said, the department did not have an officer specifically monitoring the event Sunday. While the organizing group of the rally supporting law enforcement and first responders, which identified itself as the California Valley Patriots, had advised the department of its plans, Chavez said, to the best of his knowledge the department was not notified of any plans by a counter-protest group.

Had that been known, he said, the department would have taken every step possible to try to have a presence at the location.

Mayor Pat Nagy said the incident represented a “sad occurrence” for the city.

“I wholeheartedly support both groups’ freedom of speech and to protest, but I completely denounce violence in any way, shape or form,” Nagy commented. “That matter is under investigation. It will not be swept under the rug.”