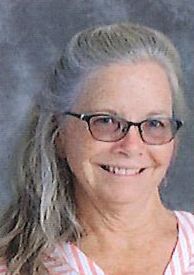 NEWMAN - A number of long-time Newman-Crows Landing Unified School District employees retired at the conclusion of the school year.

The ranks of new retirees included a trio who each have more than 30 years of service to the district, including teachers Mike Beevers (34 years) and Gail Dudley (31 years) and classified employee Lori Machado (35 years).

Among other retiring employees were teachers Anne Shoemaker and Mary Beth Roe and classified employees Diana George and Roxanna Thiessen.

The Orestimba library has been the school home for Machado through most of her 35 years in the district.

Machado started as a special education aide at Orestimba in 1985. She became the high school librarian in 1989 and other than a two-year stint in the district office remained in that role for the remainder of her career.

Upon being named librarian, Machado recalled, she and teacher Catherine Quittmeyer started building the inventory - a process that involved weeding out some 3,000 outdated books.

Even with the advent of technology, Machado reflected, the library has remained busy.

“Students still have to read. They have so many pages (to read) per quarter, and reports and projects,” she explained. “The library is still alive and running.”

Machado said she enjoyed finding new books to add to the collection - and encouraging students to become readers.

“It is always great to find the reluctant readers and have them love reading too,” she stated.

“I have a great passion for this place, for the students and staff,” Machado reflected. “It has been a great place to be and work.”

Beevers came to Yolo Middle School in 1986 as a sixth-grade core teacher. After four years in the classroom he took an open physical education job at Yolo, and remained in that role for the remainder of his career.

The position suited him well.

“I liked being outside. I always like to be be active myself,” Beevers commented. His middle school students were at an age when they liked being active as well, he noted, so the job was enjoyable.

“I never felt like I was working,” he said.

He described his approach as that of being a tolerant tyrant.

“You kind of have to blend patience and flexibility with making sure that they know who is in charge and how it is going to go,” Beevers remarked. “If kids know that you’re genuine and that you’re fair, they’ll work with you. You have to exude some confidence to gain their respect.”

Beevers also coached baseball and basketball over a span of 15 years at Orestimba, including 10 years as head boys basketball coach.

A junior college baseball coach inspired Beevers to pursue a career in education.

At the time, he added, breaking into the field was tough.

“There weren’t a lot of jobs out there,” Beevers said, “but I followed it anyway and it all panned out.”

Roe stepped into retirement after 23 years in the district and 35 years overall in education.

She taught sixth-grade English language arts at Yolo her final year - but spent most of her time in the district as a teacher at Von Renner, where she started as a K-5 special day class teacher and more recently taught fifth-grade for several years.

Roe said she tried to implement hands-on, project-based learning in her classroom - and to deliver material in a manner that captivated the attention of her pupils.

“Once you get into the classroom, you’re on stage,” she reflected. “They are depending on you to deliver a good program. It is challenging.”

“Newman-Crows Landing was the perfect fit for me. It was just a really good experience,” Roe shared. “I loved the whole thing. I still plan to volunteer.”

George started as a substitute cafeteria working in 1997 and was hired on as a regular cafeteria worker in 1999. Three years later she was also hired as an instructional aide, and served in a dual role through the remainder of her time with the district.

She worked at Bonita for 17 of her 23 years as a district employee, but at various points worked at each of the district’s elementary schools - most recently at Hunt.

“I loved working with the students,” George commented. “I enjoyed getting up in the morning and seeing them every day.”

Her time at Bonita was particularly rewarding, she added.

“We knew all the families and all the students,” George said. “Something was really special at Bonita.”

Her career did not end on the note she anticipated, as the pandemic cut short the traditional school year.

“It saddened me that I was not able to say good-bye to the students and staff I worked with every day,” she reflected.

Dudley spent the first 28 years of her career teaching a variety of classes at Von Renner Elementary before wrapping up her career as a fifth-grade teacher at Hunt Elementary for the past three years.

One of her own high school teachers encouraged her to go into teaching, Dudley shared, and she found the profession rewarding.

“I always tried to be positive with students and make them feel like (school) was a safe place,” she reflected. “My (priority) was for them to develop a love of learning, not just to learn the material but to enjoy learning and to want to learn.”

Dudley said she read aloud to her students on a daily basis, one of the things she most enjoyed about the daily routine.

“When the time to read was over, they would always ask for more,” Dudley explained.

Teaching has become more challenging through the years, she reflected, and educators going forward will have to be more well-versed technologically then ever.

While the tools and techniques have evolved, Dudley said, education at its heart remains unchanged - working with students to help them grow, achieve and find joy in learning.

“I am going to miss teaching,” said Dudley, adding that she will most miss seeing her students every day.

Shoemaker retired after 16 years of service to the district - including the last nine as a fourth-grade teacher at Hurd Barrington Elementary. She previously taught first grade for seven years at Von Renner.

Her career in education spanned 23 years.

She long had an interest in education, Shoemaker said, but was dissuaded while attending college and went into financial services for a time instead.

“I hated it,” Shoemaker recalled.

With the encouragement of her husband, Shoemaker went back to school and became a teacher.

“It was the right move to make, all those years ago, to go back to school,” she related.

As a teacher, Shoemaker shared, she put an emphasis on building relationships with her students and trying to meet the individual needs of each student.

She also emphasized that “mistakes are an essential part of learning, and they are not a bad thing. You can’t learn without making mistakes.”

Most importantly, Shoemaker said, she taught her students to believe in themselves.

“I always told them that I expect their best,” she said.

“It has been an absolute honor and pleasure to be a part of this educational community and community as a whole,” she concluded.

Thiessen retired after more than 15 years in food services.

She has worked at Bonita, Yolo and Von Renner, where she finished her career.

“We tried to make the food taste good for the seniors and the kids,” she commented, noting that more fresh items are on the menu than when she started with the district and students have far more menu variety from which to choose.

Thiessen said she greatly enjoyed her time working in the cafeteria.

“I loved seeing the little kids. They just make you smile,” she shared. “We have a wonderful cafeteria staff, and we work as a team. It has been a wonderful place to work.”