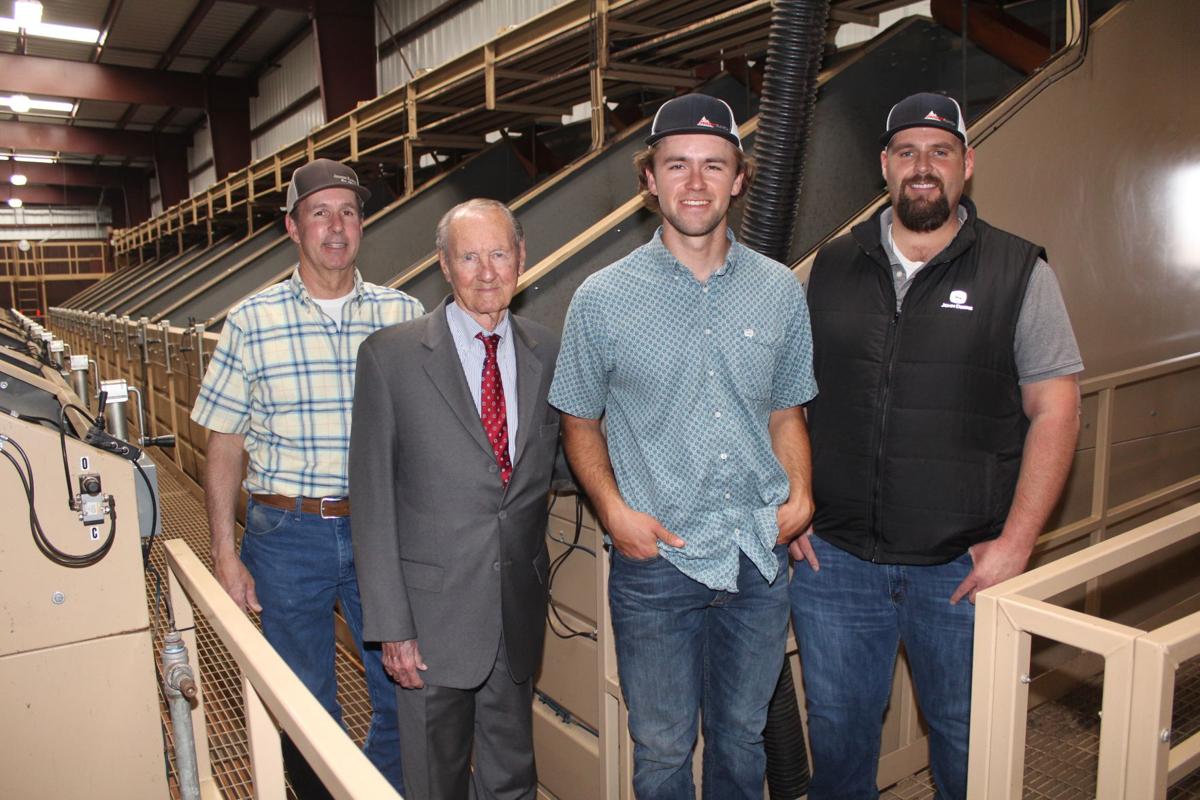 Pictured in the new hulling facility at the Jensen ranch are, from left, Kirk Jensen, Wilmar Jensen, Andrew Jensen and foreman Tyler Lemas. 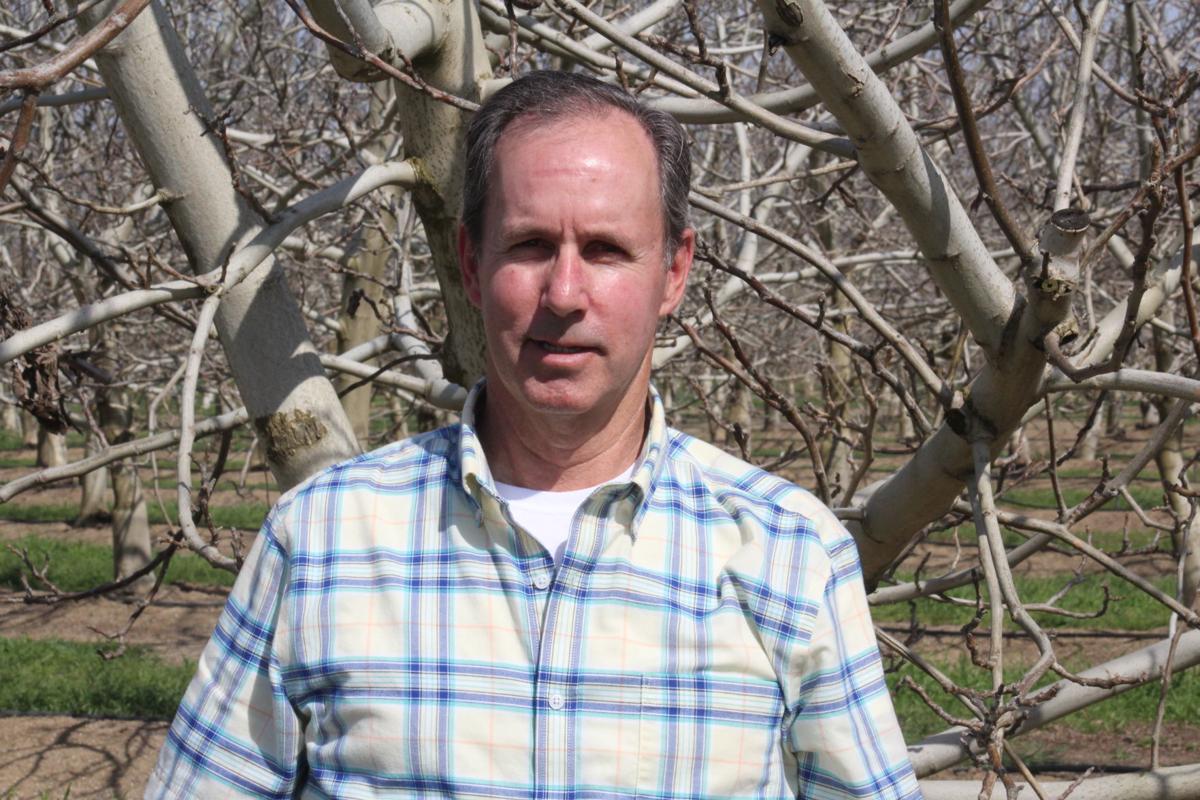 Kirk Jensen has continued the growth and evolution of a family farming legacy which dates back to the early 1900s.

Pictured in the new hulling facility at the Jensen ranch are, from left, Kirk Jensen, Wilmar Jensen, Andrew Jensen and foreman Tyler Lemas.

Kirk Jensen has continued the growth and evolution of a family farming legacy which dates back to the early 1900s.

GUSTINE - Walnuts have been a staple crop spanning generations for one West Side family.

Today the Jensen family, which traces its local agricultural roots back to the early 1900s, is involved in not only the walnut production (as well as some almonds) but walnut hulling, processing and marketing as well.

Today, in addition to the orchards operated by the family, a state-of-the-art huller stands on the family’s original Jensen Road ranch outside Gustine and brothers Kirk and Mark Jensen own Patterson Nut Company, where walnuts are taken for processing.

Kirk oversees orchard production, the huller operation and the processing and marketing side of the family enterprises at Patterson Nut, while brother Mark, who is an attorney, looks after the business details.

“We have a good partnership and combination of skills. I enjoy the production; my brother covers the business aspect,” Kirk shared. “We would not be able to do what we do without the combination that we have.”

Their father, Wilmar Jensen, remains active on the ranch and in the management side of the operation, and Kirk’s son Andrew, who is an independent pest control advisor, is also involved in the business.

His great-grandfather settled on the Jensen Road ranch in 1904, growing row crops and raising cattle and chickens.

His grandfather purchased an adjacent ranch off Whitworth Road in the mid-1930s and planted a small walnut orchard to complement the row crops and livestock.

“My grandfather always had a small huller,” Kirk related. “In his time, you poured walnuts in to the huller by the sack or bucket.”

He said the family’s first serious push into walnuts came in the late 60s or early 1970s when Wilmar, who is an attorney, purchased 80 acres of additional land adjacent to the ranches purchased by the prior generations.

“My dad always loved farming,” Kirk shared. “He went through college at a young age and went into the service at World War II. When he came home farming was at a standstill. That was when he went to law school. As soon as he could he bought his first ranch, and still loves it.”

The family has pushed more deeply into trees in the past 25 years, Kirk said, and is now “probably two-thirds walnuts and one-third trees.”

Kirk introduced almonds into the overall operation after purchasing property between Newman and Gustine in 1996.

“I like almonds as well,” he noted. “In these years when things are a little tougher you get some balance.”

The only row crops now grown are those planted between trees for a few years until they come into production, he added.

Kirk said most of the family’s farming operation falls under J. Wilmar Jensen, Inc. “I have some of my own ranches, we all have some together, I have some with my brother,” he explained.

In the 1990s, the Jensens branched out by building a huller on the original family ranch.

“We kind of outgrew (his grandfather’s huller) and outsourced our hulling through the early 90s. Walnuts take a lot of care for quality, and it was something we wanted to be in control of so we decided to build our first huller,” Kirk explained.

Patterson Nut was founded in 2001 after Kirk and Mark Jensen acquired an existing walnut processing facility.

“In the last 20 years we have been pretty serious about hulling,” Kirk said.

Through much of that time, the Jensens ran their crop through the home ranch huller while using their Patterson huller for custom work.

As the industry evolved, however, the need for a new huller became evident.

Four years ago, the new huller built by Kirk, Mark and Wilmar came into production - offering more than twice the capacity of the two previous, now-retired hullers combined while consolidating the operation.

“There used to be probably 10 varieties of walnuts, with harvest spread out from September until the end of October,” Kirk explained. “Now there are predominantly three, that start Oct. 10 and finish at the end of October. The fields are bigger and the harvesting is faster.

“You can’t pile walnuts on the ground like almonds. You have to take them in and run them that day,” Kirk told Mattos Newspapers. “For quality, there is a timeliness to it. You can’t say that you will get to it in a week.”

Walnuts coming into the plant go through a process which removes debris such as leaves and sticks, then a pre-cleaning before going through the huller which removes the remaining green hull and washes the nuts. The walnuts then process through a pneumatic process called aspiration which removes lighter nuts (which lack fully-developed walnut meats), are electronically sorted for defects, undergo inspection by employees checking for any defects not taken out in the process and are dried for eight to 24 hours to reach a specific moisture content.

“As soon as they are dried they are hauled out to the processor. At Patterson they are graded, fumigated and put into storage,” Kirk said.

Some will be marketed as in-shell walnuts, while others are cracked and shelled.

“The shelling process is delicate,” Kirk shared. “Walnuts were not meant to be cracked by a machine. The goal is to get two halves out of each one, which is a challenge.”

Quality is emphasized at every step in the process, whether it involves walnuts from the Jensen orchards or those being processed for other growers.

“I envisioned being a neighborhood huller and processor who people can put a lot of confidence in,” said Kirk. “As a farmer you put a lot of trust in your processor.”

The vertical integration of the operation includes a Jensen Ranch trucking enterprise, he added.

While the operation has evolved significantly, Kirk said he does not see substantial expansion on the horizon.

“I don’t have a lot of desire to be bigger,” he commented. “I can still be my own boss and have a hands-on approach.”