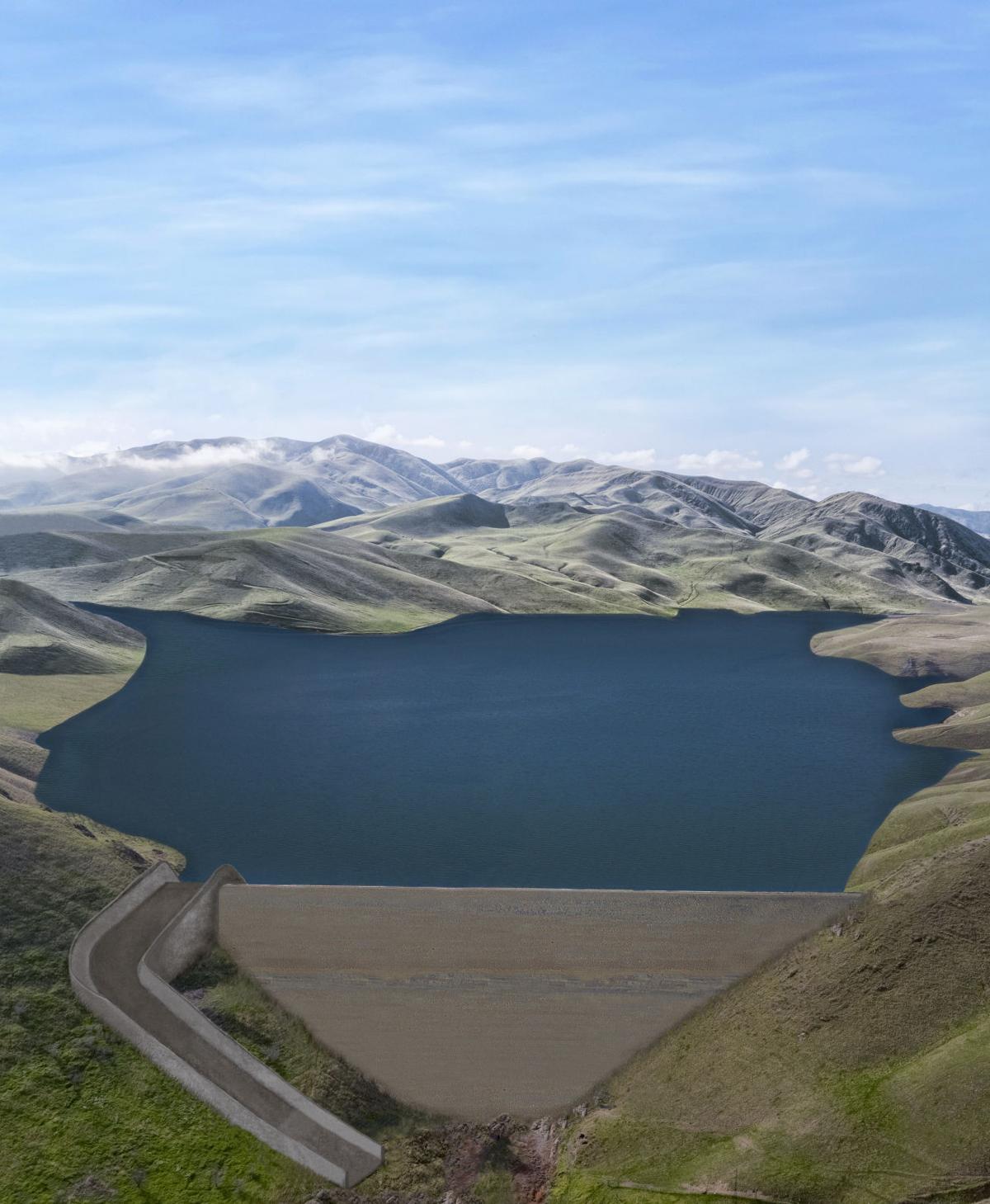 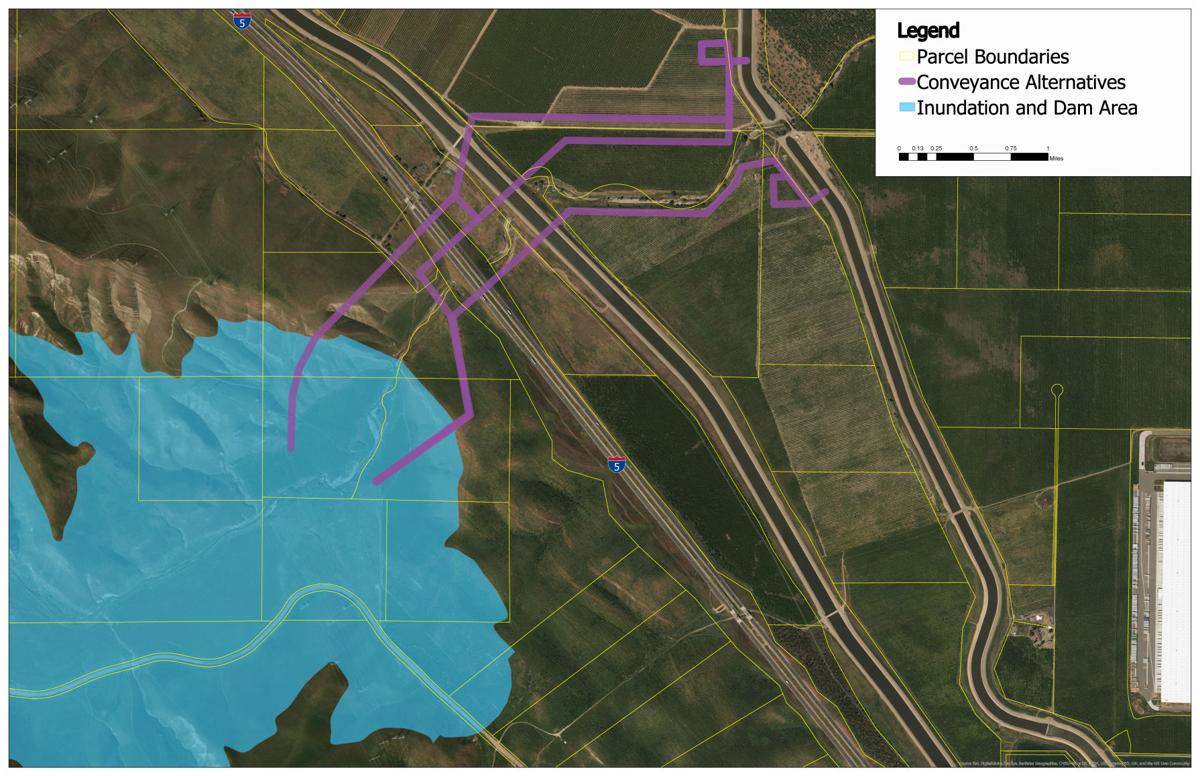 A rendering illustrates the location of the proposed Del Puerto Canyon Reservoir just west of Interstate 5 and the Patterson area logistics centers.

A rendering illustrates the location of the proposed Del Puerto Canyon Reservoir just west of Interstate 5 and the Patterson area logistics centers.

A storage reservoir proposed in Del Puerto Canyon near Patterson holds the promise of creating a more reliable water supply for growers served by a coalition of irrigation agencies.

The idea is being championed by the Del Puerto Water District, which serves growers along the Interstate 5 corridor, and the San Joaquin River Exchange Contractors Water Authority, a group of four water agencies, including the Central California Irrigation District.

Anthea Hansen, general manager of the Del Puerto district, and Chris White, executive director of the exchange contractors group, stressed during a press briefing recently that the reservoir is essential in providing the water agencies greater local control over their water supplies.

While the reservoir holds many potential benefits, Hansen said, “primarily our goal here is to solve a storage problem. We believe that there is enough water available, but we don’t have the tools to manage that supply efficiently. That is what has brought this about.”

Del Puerto, she added, has been innovative in developing supplemental water sources for its growers. One such endeavor involves the recycling of treated wastewater from the cities of Modesto, Turlock and Ceres for irrigation use in the district.

But the ability to store and better manage water supplies is a crucial element which is currently lacking, she indicated. A reservoir would also allow greater control over the timing of water deliveries, and allow the agencies to store water during wet years for use during dry times.

“We can provide more reliability to our customers so there are not these peaks and valleys of supply from year to year,” Hansen noted. “This helps our farmers with planting decisions, and with getting financing.”

White emphasized that the reservoir would not increase pumping through the Sacramento-San Joaquin Delta to south-of-the-delta users.

“This is not new water. This is taking water already coming south of the delta and managing it better,” he stated. “This does not affect delta operations. We are looking to manage our water supplies that have already been allocated in a way that is more protective of the local area.”

Del Puerto’s annual water allocation is much more tenuous than that of the exchange contractors. For that reason, Hansen said, the district’s search for new supplemental water supplies will be ongoing.

“We just have to have a place to store it,” she said.

Ag would not be the sole beneficiary of a reservoir, White and Hansen said.

There are regional economic benefits as well, Hansen pointed out, as ag remains the lifeblood of valley communities.

“If we can be more self-reliant, we would bring more stability to the jobs in these small West Side communities,” she stated.

By the numbers, the proposed reservoir would encompass a surface area of 800 acres, and would involve a 200-foot high earthen dam at the mouth of the canyon, just west of Interstate 5, as well as three saddle dams. The dam would have a capacity of 85,000 acre-feet of water, and would be connected by a pipeline to the Delta-Mendota Canal.

The reservoir would not be conducive to on-the-water recreational opportunities because the water level would drastically fluctuate.

The cost, estimated at up to $500 million, would be borne by beneficiaries of the project. White and Hansen said the agency partners are hoping to secure federal funding to help with a portion of the costs.

A draft environmental impact report is expected to be published in December, followed by a 45-day comment period.

The time line calls for environmental review complete by mid-2020, followed by design and acquisition of the privately-owned property on which the reservoir would be located. Construction could begin in 2022, with completion in six years.

The project would require relocating a segment of Del Puerto Canyon Road and a Shell Oil pipeline.

Hansen and White said they believe the reservoir project, which has been previously studied, is more palatable from an environmental standpoint because it offers off-stream storage which does not disrupt a river flow or fishery. Nor does it impact delta pumping, they reiterated.

The proposal would be subject to approval from a host of state and federal agencies.

While the project is not without its challenges, they said, studies to date have not revealed obstacles they consider insurmountable.

“We haven’t seen any big issues that would cause us to not pursue this project,” White told reporters. “The challenges that we are finding through the process are things that we can solve.”