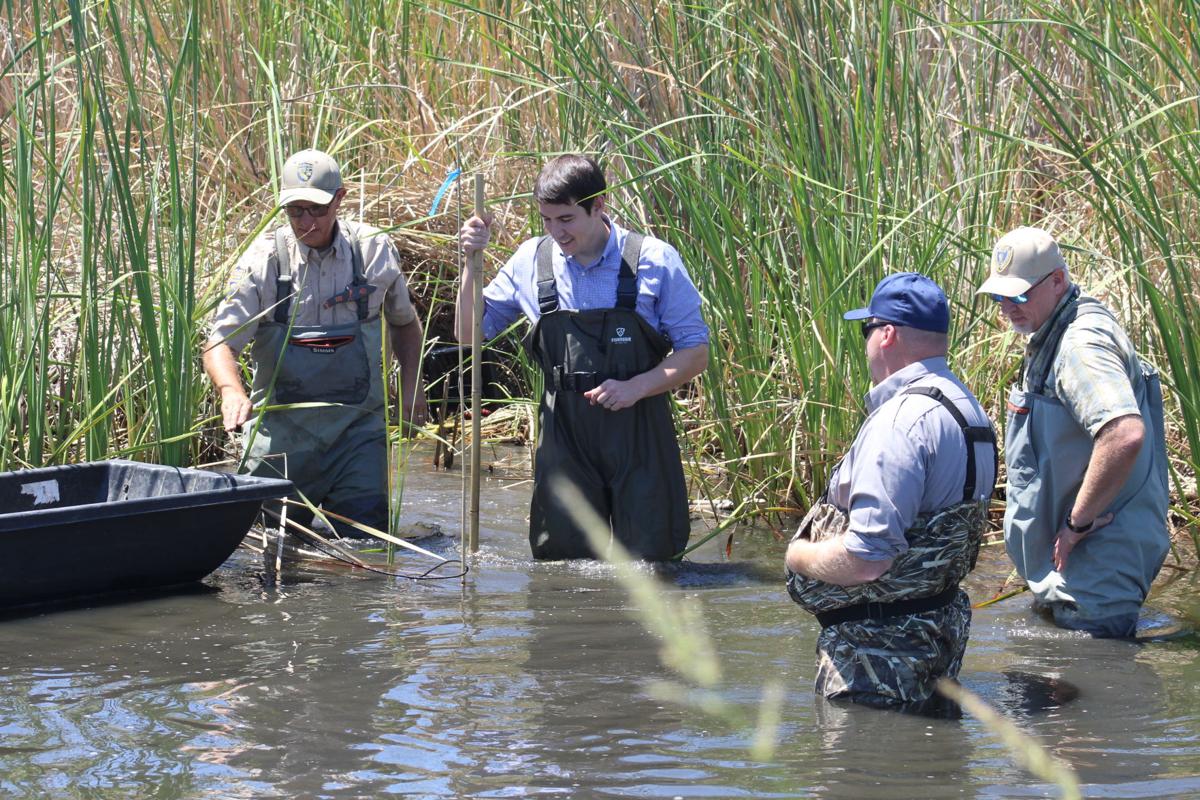 Congressman Josh Harder, second from left, recently toured an area in the Los Banos Wildlife Area where the California Department of Fish and Wildlife is trapping nutria, an invasive semi-aquatic rodent which poses a threat to the state’s levee system, wetlands habitat and ag industry. 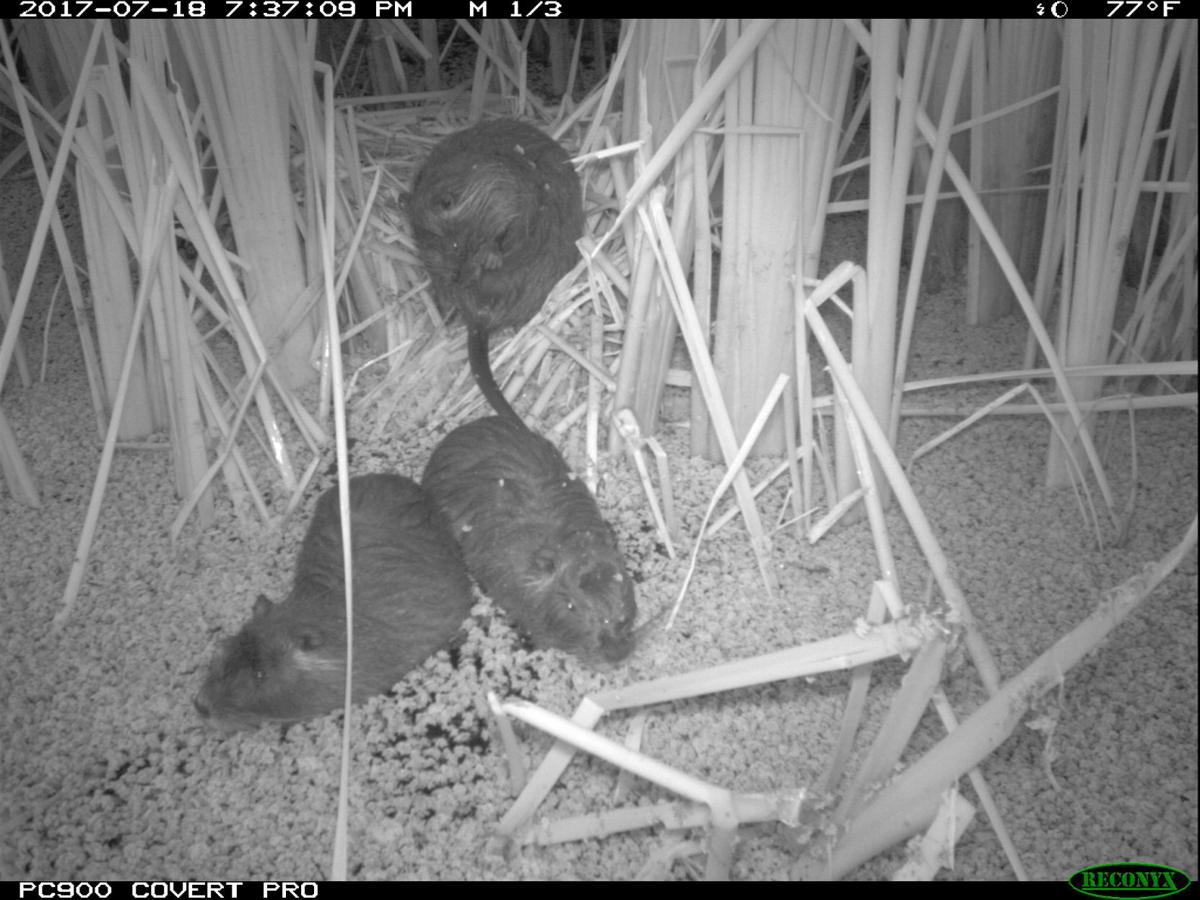 A trail camera captured nutria moving through a wetlands area in July 2017.

Congressman Josh Harder, second from left, recently toured an area in the Los Banos Wildlife Area where the California Department of Fish and Wildlife is trapping nutria, an invasive semi-aquatic rodent which poses a threat to the state’s levee system, wetlands habitat and ag industry.

A trail camera captured nutria moving through a wetlands area in July 2017.

An invasive, semi-aquatic rodent which resurfaced in California two years ago poses a potentially devastating threat to the state’s levees, wetlands and agricultural industry.

Representatives of the state’s nutria eradication program underscored the importance of full eradication to the state’s future - and outlined the consequences if that effort fails - during a Friday media event with Congressman Josh Harder in a wildlife area near Los Banos.

That area is among those considered “ground zero” in the nutria battle, representatives of California’s Department of Fish and Wildlife indicated. Another hot spot of nutria activity has been near Newman, where 140 of the rodents have been removed and dispatched from a private ag pond near the confluence of the San Joaquin and Merced rivers and the China Island refuge area.

Those in attendance had the opportunity to visit one of the trapping sites in the Los Banos Wildlife Area, after being briefed on the crisis at the Department of Fish and Wildlife’s nutria eradication incident command center on South Wolfsen Road.

The nutria have a vociferous appetite for aquatic plants and a preference for roots, state spokesperson Peter Tira told Mattos Newspapers in a previous interview, stripping wetlands of vegetation which provides habitat for native species.

They are also aggressive burrowers capable of compromising the integrity of levees and canals - and are all the more insidious because they burrow beneath the water line, hiding the damage done.

Nutria will also damage trees, officials said, and some have been taken in Stanislaus County almond orchards. The rodents can exceed 20 pounds in size.

Valerie Cook, who leads the state’s eradication program, emphasized the importance of completely eliminating the nutria, which were once thought eradicated in the state but resurfaced in 2017.

The state must act quickly and decisively to prevent the nutria population from spinning completely out of control, she emphasized. Full eradication, Cook indicated Friday, will be a years-long commitment.

“We have a limited window of opportunity when we can respond to eradicate them,” Cook commented. “Our reality is that we have to get out there and jump on this thing.”

Time is of the essence, she emphasized, because nutria reproduce exponentially.

A single female can have three litters of young in a 13-month period, Cook explained. The average litter size is six, and the young females begin reproducing in as little as four months.

Nutria live in colonies, she noted, each with a dominant male and multiple breeding females. When young males come of age, she said, they can disperse as far as 50 miles through waterways to establish their own colonies.

Of particular concern, Cook said, is the specter of nutria establishing in the Sacramento-San Joaquin delta.

She said the state agency has essentially been in an emergency response mode following the discovery of nutria in March 2017 in a beaver trap in Merced County, but wants to shift to a long-term eradication program.

“Everything we have done has been to suppress that population growth,” Cook emphasized. “What we have been doing is not eradication. It is trying to manage an impending disaster while we get the resources.

The eradication effort has the funding to operate for three years, she said, but must secure resources beyond that time. Harder has introduced a bill to provide an additional $7 million in funding for that effort, which he said Friday has received bipartisan support.

Nutria were initially introduced to the state for the fur trade. But some escaped nutria farms, and others were simply set free when the fur trade didn’t pan out, officials said. A previous campaign resulted in the eradication of nutria from California in the 1970s.

While the source of the current infestation remains unknown, Cook said she is confident that somehow the rodent was re-introduced in the state. Had a few simply escaped detection during the previous eradication effort and were left unchecked, she pointed out, the population would long ago have skyrocketed out of control.

The state has set up game cameras to help detect nutria, and have trapped nearly 688 nutria in five counties. Of those, 580 have been taken in Merced County, most from ponds and sloughs.

Other measures are planned.

Cook said the state intends to implement a “Judas nutria” program. Rather than killing a trapped nutria, the animal will be sterilized and released back out into the wild with a GPS locator, hopefully to return to its colony. The device will help identify locations of nutria colonies, and will also help track seasonal movement of the rodents.

Plans are also in the works to bring in dogs to detect nutria. The canines can also help pinpoint the location of the rodents, as well as help confirm if specific areas have been cleared of nutria.

The ongoing effort to eradicate nutria will include operations in the Newman area, said Greg Gerstenberg, an operations chief with the campaign. He said that since last summer staff members have intermittently worked on nutria detection and removal from China Island as well as an ag pond in an area of the river confluence. The effort was not continuous locally because workers were periodically deployed to other areas. Gerstenberg said nutria trapping efforts in the local area would resume this week as part of the overall effort.

Cook said the risk nutria pose to the state cannot be overstated.

“Eradication is what has to happen,” she told those gathered Friday. “It has to be done.”