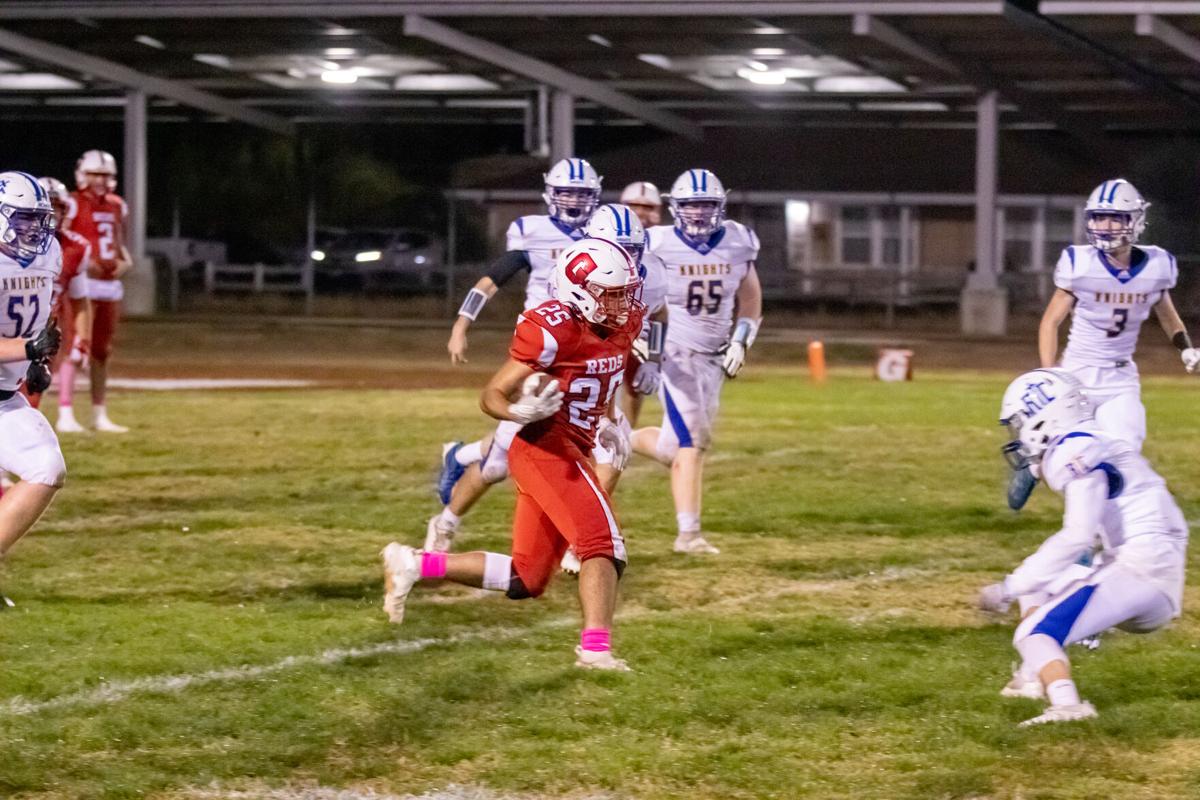 Junior Eduardo Gonzalez picks up some yards for the Reds during their tough 24-7 loss to the Ripon Christian Knights. 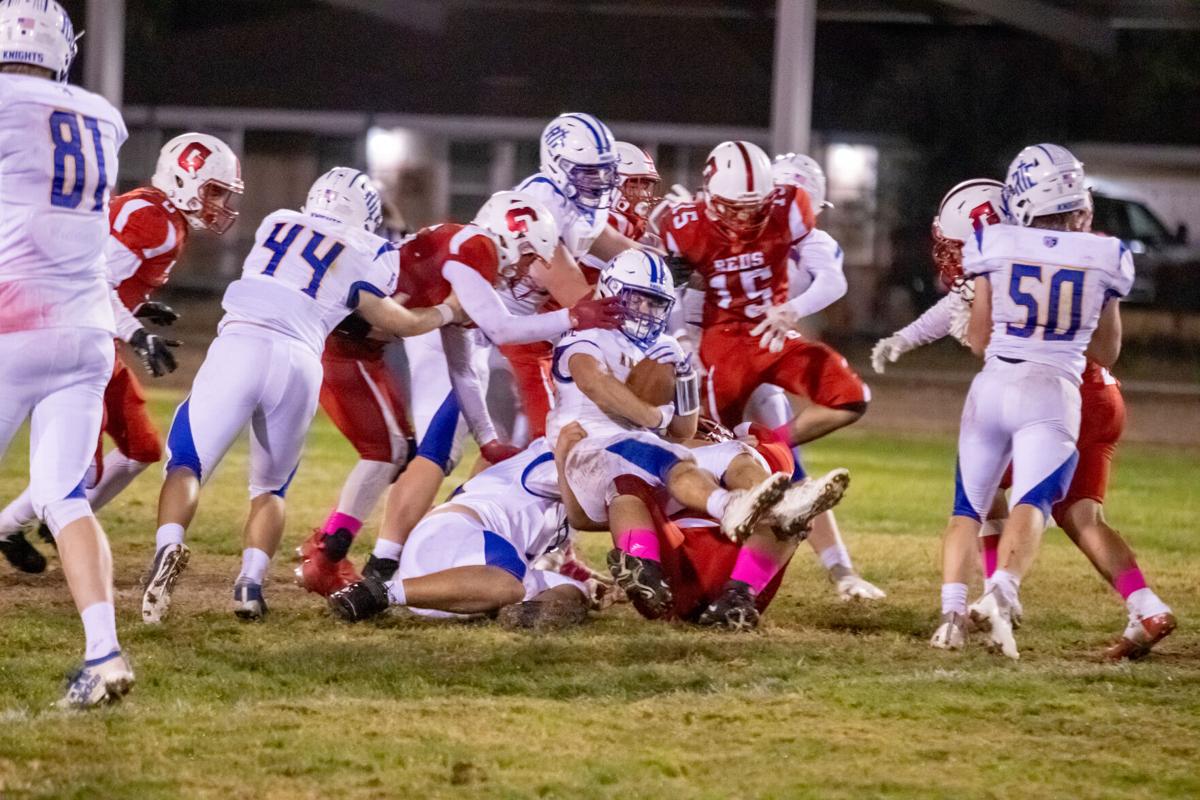 A swarm of Reds make a tackle on a Ripon Christian ball carrier. 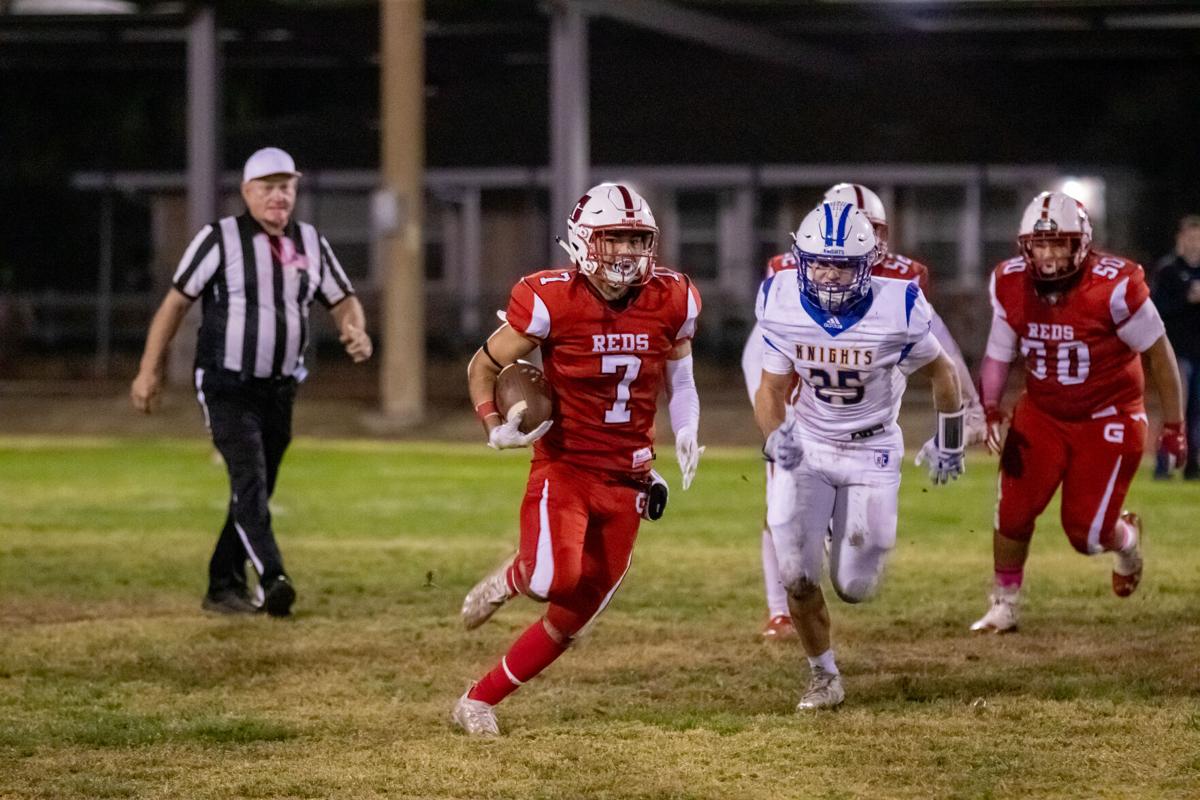 Junior Eduardo Gonzalez picks up some yards for the Reds during their tough 24-7 loss to the Ripon Christian Knights.

A swarm of Reds make a tackle on a Ripon Christian ball carrier.

The Gustine Reds came into week nine coming off a hard fought double overtime win over Le Grand under their belt. The visiting Ripon Christian Knights (6-3 overall; 3-2 SAL), who sit in the third place position in the Southern League, out scored the Reds in all three quarters of the game only allowing Gustine to get a score in the first quarter.

The Knights put up 213 offensive yards all in the rushing category. Comparitively, the Reds’ 182 yards offensively (99 rushing, 83 receiving) just wasn’t enough to keep up with the Knights.

The Reds record fell to 3-5 overall and an even 3-3 in the Southern League.

Trouble started right away in the game for Gustine when they fumbled the ball early in the game, allowing the Knights to rally off that mishap. They marched down the field to put the ball in perfect field goal range and put  it through the uprights, taking an early 3-0 lead over the Reds.

On the Reds’ next possession the team was moving and clicking on all cylinders into the Knights’ territory. Gio Quezada (7 completions on 14 attempts for 83 yards, 1 TD) was able to leave the pocket and use his running ability to find the endzone on a quarterback keeper. Danny Hernandez was able to put the ball through the uprights on the extra point attempt putting the Reds up 7-3 at the end of the first.

They had a scoreless second quarter taking the Reds into the break with a 7-3 lead over Ripon Christian.

At the start of the second half the Reds scoring for the night was done but the Knights weren’t finished on what they started. The Knights managed to score twice in the third capitalizing off two huge mistakes by the Reds. The first came from a blocked punt the Knights were able to take back for a touchdown. As for the second, they were able to intercept a pass thrown by Quezada that was taken all the way back for a pick six. That ended the third quarter and increased the Knights’ lead 17-7.

Mid-way through the fourth, the Knights were able to cap off their scoring with a final rushing touchdown that ended the night with a final score of 24-7.

“We had many opportunities throughout the game, and we just could not get to the endzone and left many scoreless drives right at the goal line,” said head coach Ronnie LaBry. “Along with that if you take out those big plays they capitalized on us in the third quarter, we are right there in this game in a potential win.”

LaBry also mentioned that penalties and mishaps hurt them throughout the game, but also on a positive note said the defense played extremely well and did their assignments.

Gallichio led the defensive side of the ball with seven total tackles, Arturo Alapizco racked up four tackles, while Christian Garcia, Gilbert Sotelo, and Danny Hernandez each chipped in three of their own.

Coming up in week ten the Reds will face off against their Highway 33 rival, the Orestimba Warriors (5-4 overall; 3-3 SAL) in their 75th anniversary game battling for the top prize of the chief and the bragging rights. Kickoff for varsity action will begin at 7:15 p.m at Rodger “Coach” Pauletto Field.

“Coming into this game it’s going to be a really great match up, because both of these teams are very physical and they both know how much this game means to the schools, these two communities and how much passion goes into this game. There’s so much history behind it all,” said LaBry. “Orestimba, they are really well coached in the passing scheme and that’s what we need to prepare for and minimize on that because they have some good receivers. As for us, we need to be able to run the ball like we know how and play how we know how and limit our distractions coming into this game.”