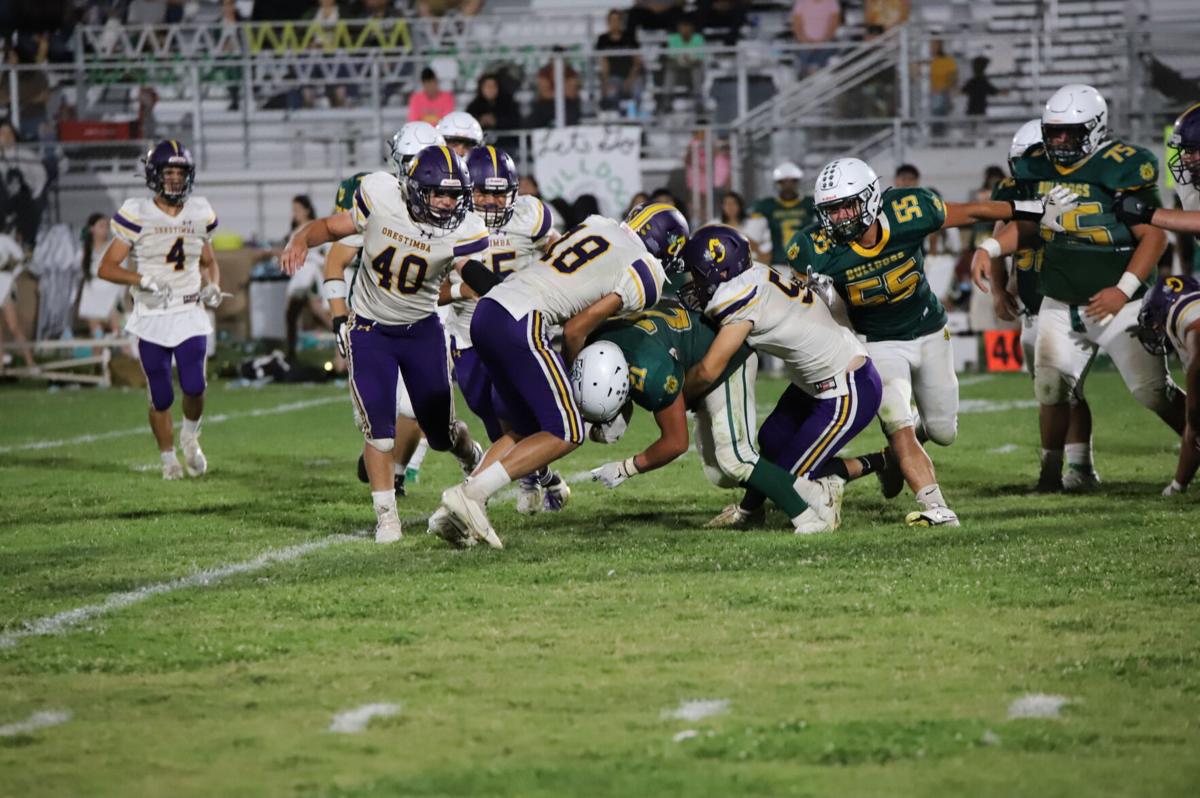 Julian Perez (18) and Pedro Barajas (50) assist each other to stop a Bulldog ball carrier. 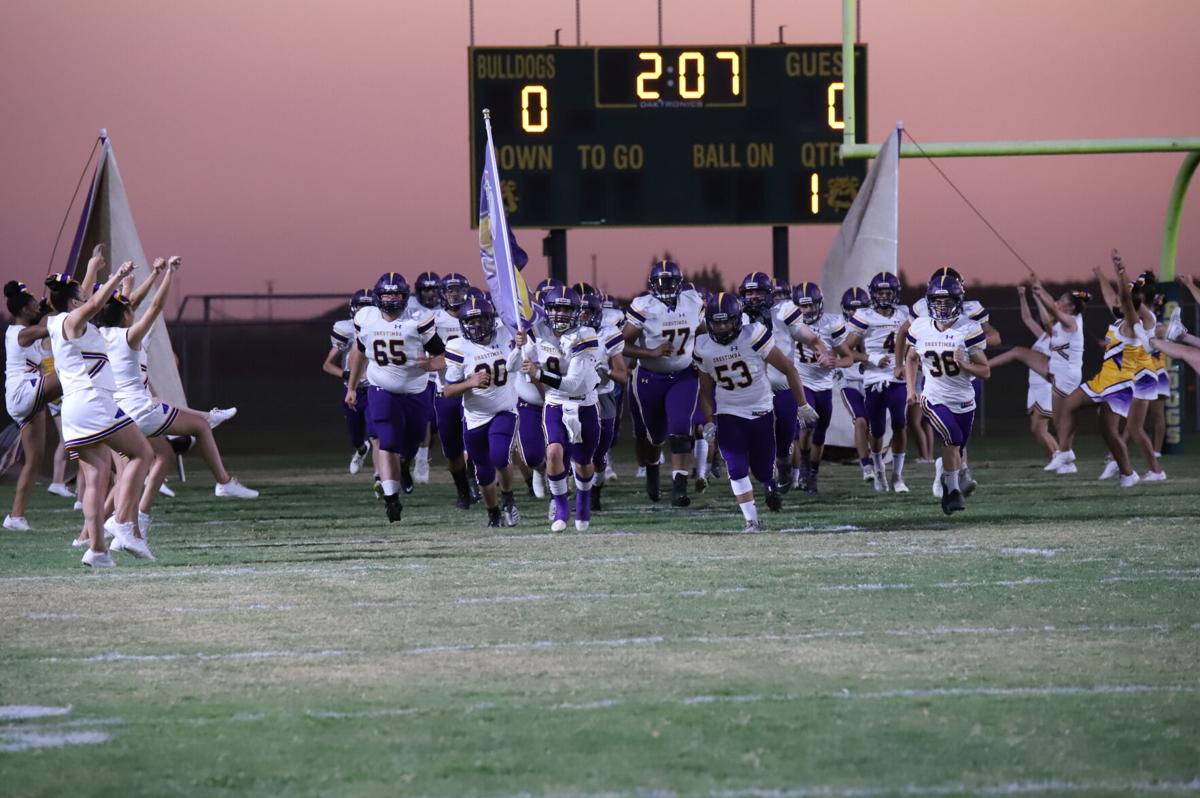 The Orestimba Warriors rush out onto the field to compete in their first Southern League contest game of the season. 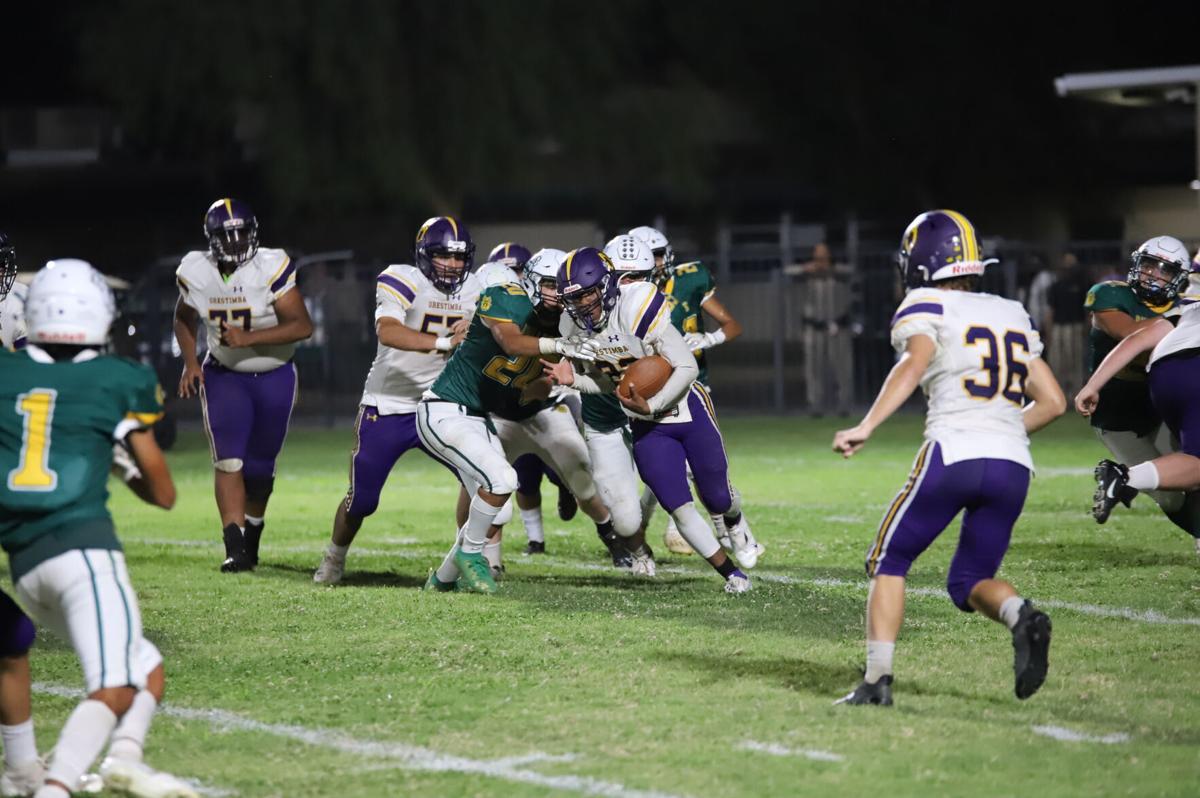 Leading rusher of the night, Lazs King looks to break free and pick of yards during the Warriors game last Friday night.

Julian Perez (18) and Pedro Barajas (50) assist each other to stop a Bulldog ball carrier.

The Orestimba Warriors rush out onto the field to compete in their first Southern League contest game of the season.

Leading rusher of the night, Lazs King looks to break free and pick of yards during the Warriors game last Friday night.

Orestimba dropped a narrow decision Friday night as they faced off against host Le Grand. The Warriors once again had their fans at the edge of their seats the entire night, with their offense and defense going to work. But it wasn’t enough to pull ahead and come away with the victory as the Bulldogs took it in the final seconds with a score of 14-12.

The Warriors troubles began early when on a field goal attempt, the Bulldogs defense pushed their way through the line and came up with a solid block, picking up the ball and taking it back 90 yards to score the first touchdown of the evening making it 7-0.

The Westsiders answered back with a touchdown of their own when senior back up quarterback Devin Bettencourt hit Jayden Vargas in stride for a 60-yard passing touchdown. The extra point was blocked and that ended the scoring for the first half of the game.

As the two teams came back from the break they both exchanged blows trying to punch it in the endzone but came up short each time during the third quarter.

Both teams came with a different game plan entering into the fourth quarter.

Early in the fourth quarter the Bulldogs set themselves up in good field position for a scoring play. They capitalized and punched it in for a 10-yard passing touchdown. The extra point was good and the Bulldogs took the lead 14-6.

With the final minutes ticking away off the clock the Warriors found the momentum they needed to march right down the field to put them into the redzone. Running back Lazs King, with   blocking from his offensive line and receivers, was able to walk right into the endzone on a 5-yard rush. That score brought the Warriors within two of the Bulldogs.

The Warriors were looking to tie the game with a two-point conversion and take it into overtime but were stopped right outside the goal line giving the ball back to Le Grand.

The Bulldogs took a turnover on downs and the Warriors looked to finish this one out and take the victory. They had great momentum moving the ball down the field taking them to Le Grand’s own 25-yard line where they sent out the field goal unit team.

The game almost seemed to move in slow motion as the hike of the ball was passed to the place holder and as the kicker approached the ball. Once again the Le Grand defense came up huge in the final seconds by blocking the field goal and sending the Warriors home with their first loss in the Southern League this season.

“Offensively we struggled, we moved the ball very well, but being able to finish the drive and score that’s what killed, especially being near the redzone two to three times and not putting up any points,” said Coach Aaron Souza. “As for defense I believe we did extremely well. We had three big turnovers resulting in interceptions. Just bad we couldn’t pull out the win.”

Bettencourt had eight completions on 17 attempts for 89 yards and one touchdown.

The offensive leader of the night was King, who had 22 touches for 145 yards rushing and a touchdown. Behind him was Kai Brazil who had six carries for 35 yards.

In the receiving core  Vargas was the top receiver with three catches for 72 yards.

On the defensive side of the ball Pedro Barajas was the lead tackler with four, while Brazil trailed behind with three of his own. Gerardo Torres, Drake Perez,and King each added two tackles.

As for Adrain Reyes, Julian Perez, and King they each recorded an interception on the night.

This upcoming week the Warriors will be facing off against the tough and well-sized Ripon Christian team, who took a 35-0 victory back in the 2019 season when these two teams last faced off in Southern League play.

“The Knights are a really physical team and are very good in size. We just have to come out and perform like we know how,” said Souza. “This week we have Vincente Lopez returning and he’ll start at the quarterback position for us, and also we just need to play great defense against these guys and to remember to come out firing and ready to score early.”

The Warriors will be looking to get back on their feet and receive their first league win as they travel to Ripon Christian, game time will begin at 7:15 p.m.