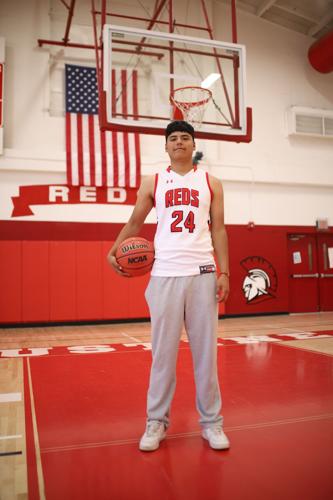 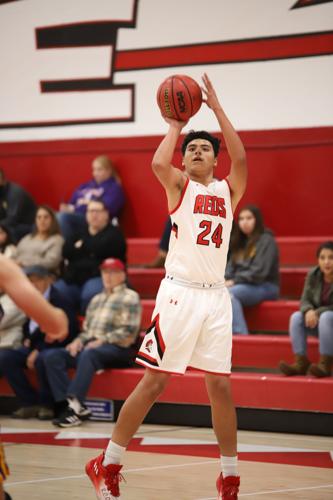 For many being an athlete and falling in love with a sport is the greatest feeling and thing to happen in life. But for most the challenge of also balancing the life of being a student and also an athlete can be a mixture that can be sometimes very hard to handle.

As for incoming Gustine High senior Alejandro Lugo, the son of Yesenia Galvan and Alejandro Lugo, he has figured out the perfect formula to balance the two lives he has had since the seventh grade.

At GHS Lugo has been competing in both basketball and football since his freshmen year and has been playing both of those sports since he has been in middle school.

Before he picked up a basketball or football Lugo says his mother was a huge inspiration to him to get active and get started with his sporting career.

“I used to play soccer all the time but as I got older I grew out of it. My older sister really pushed me to play basketball and train for it,” said Lugo. “You can say that I was a star player in middle school because of her encouragement and support.”

Growing up for Lugo he always had a basketball hoop outside his house or a hoop around nearby to go around and just shoot hoops, while he also loved going outside with his friends to play full court games. Over the years eventually going outside and playing basketball with his friends evolved to them showing him about football and since then he fell in love with the sport and really worked to perfect his skills.

As he looks forward to his senior year and prepares for the 2022-2023 season he has set some goals for himself. His ultimate goal is to make his family proud of all he does this season, as well he wants to stay focused and motivated, and graduate knowing he did his best and went out of his comfort zone to better himself and his teammates around him.

During his off season this summer — and the previous summers — Lugo usually goes out and works on things by himself most of the time because at the end of the day he controls how he thinks and what he does during game time he shared.

“I use my basketball court to practice my shots, my vertical, my techniques, and the basics. During the summer my friends and I go out and run our own basketball games to help each other grow in the sport,” said Lugo. “Now, for football I usually go out with my friends and put in the work at the high school field running routes, conditioning, and the fundamentals to prepare us for season.”

As his senior year season approaches Lugo reminisced on a basketball memory his freshman year that really stood out to him.

“My greatest memory is beating Orestimba my freshman year of high school in basketball. That game I had a career high 23 points and I was very proud of myself. At the time we only had seven players,” he shared.

With much time to figure out what he wants to do after graduating from Gustine High, Lugo has had his mind made up of where he would like to go and major in. After high school he would like to enroll at a junior college to continue his basketball career as well as studying to become an architect to eventually transfer to a four year school.

He says his reason for wanting to be an architect comes from watching his father over the years build houses and seeing the process of what it takes to build a house is what really sparked his interest.

At Gustine High Lugo found someone that was a huge mentor to him and a huge help to keep him focused in sports and also in the classroom.

“One person I want to talk about is my coach Ronnie LaBry. He would always push me to do better and still does to this day. When I was at my lowest he pushed me to move on from the negative mindset I had and I appreciate how he sees all of us like his kids. He builds relationships with each and every one of us and I have learned a lot from him and he is someone I look up to.”