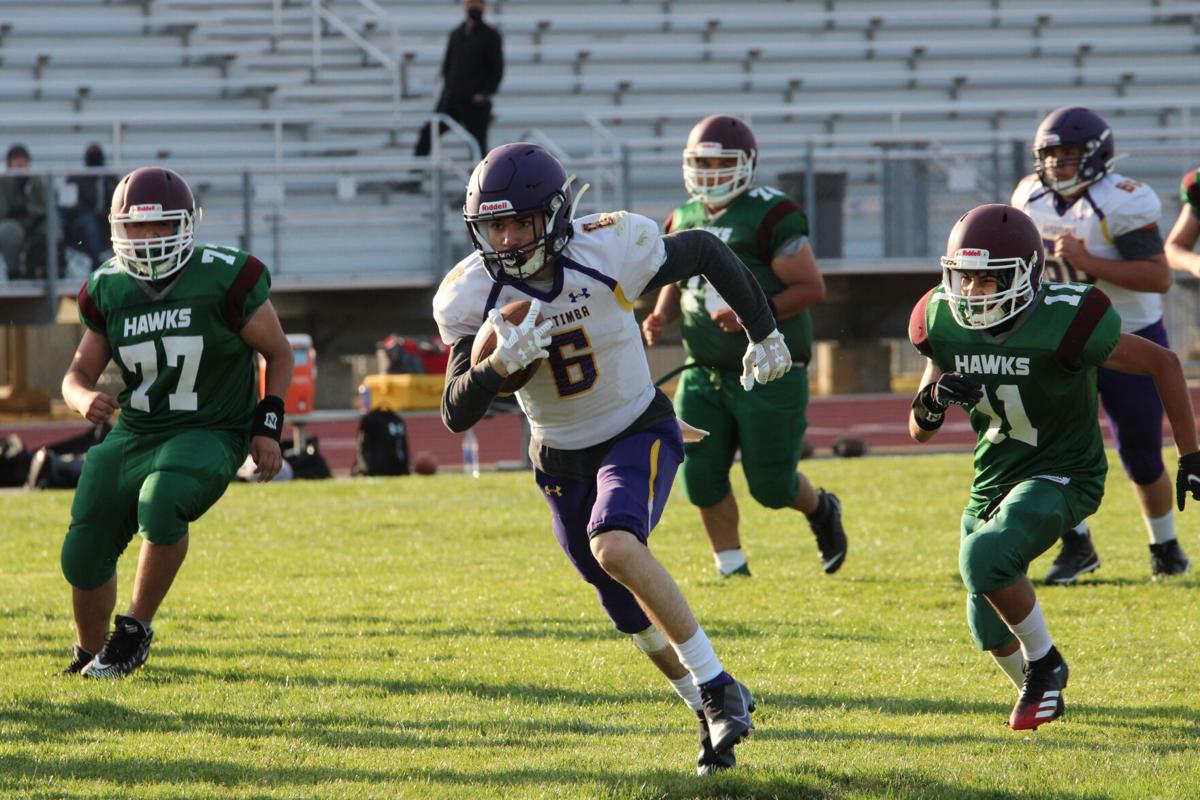 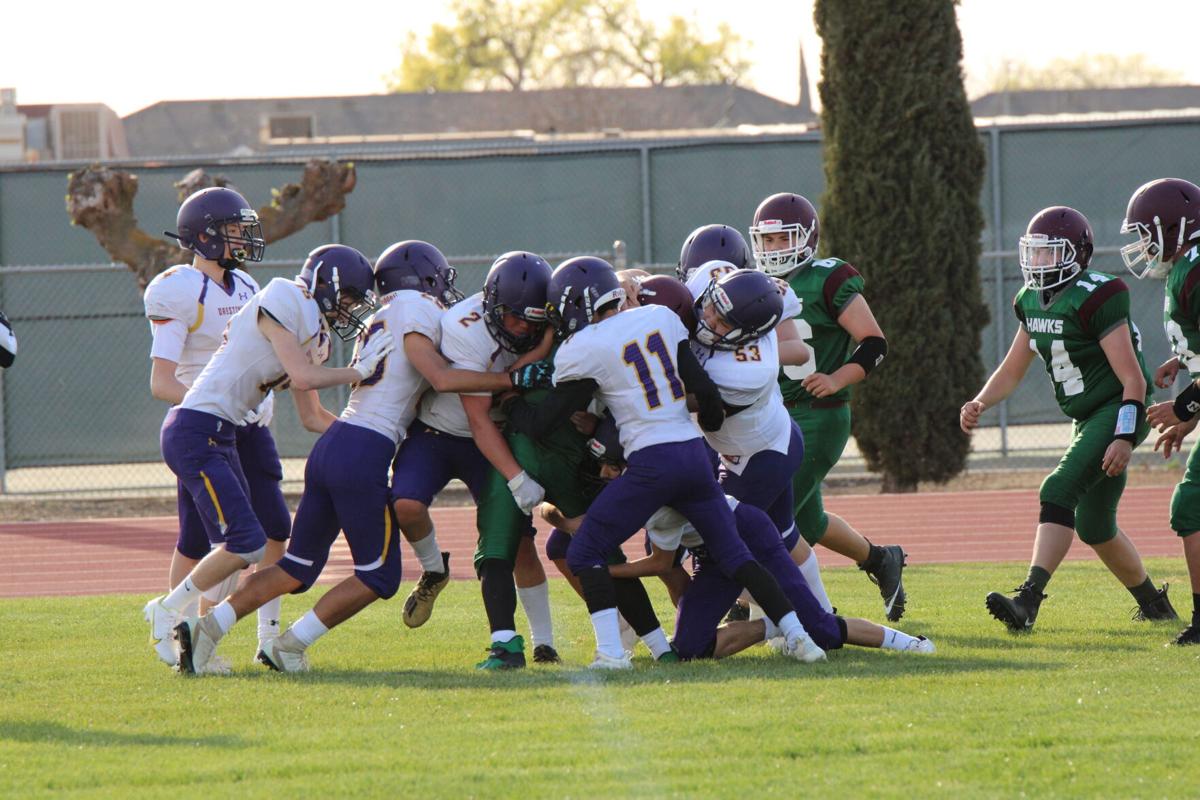 A swarm of Orestimba tacklers converge on a Central Valley ball carrier during the JV Warriors' victory Thursday in Riverbank. 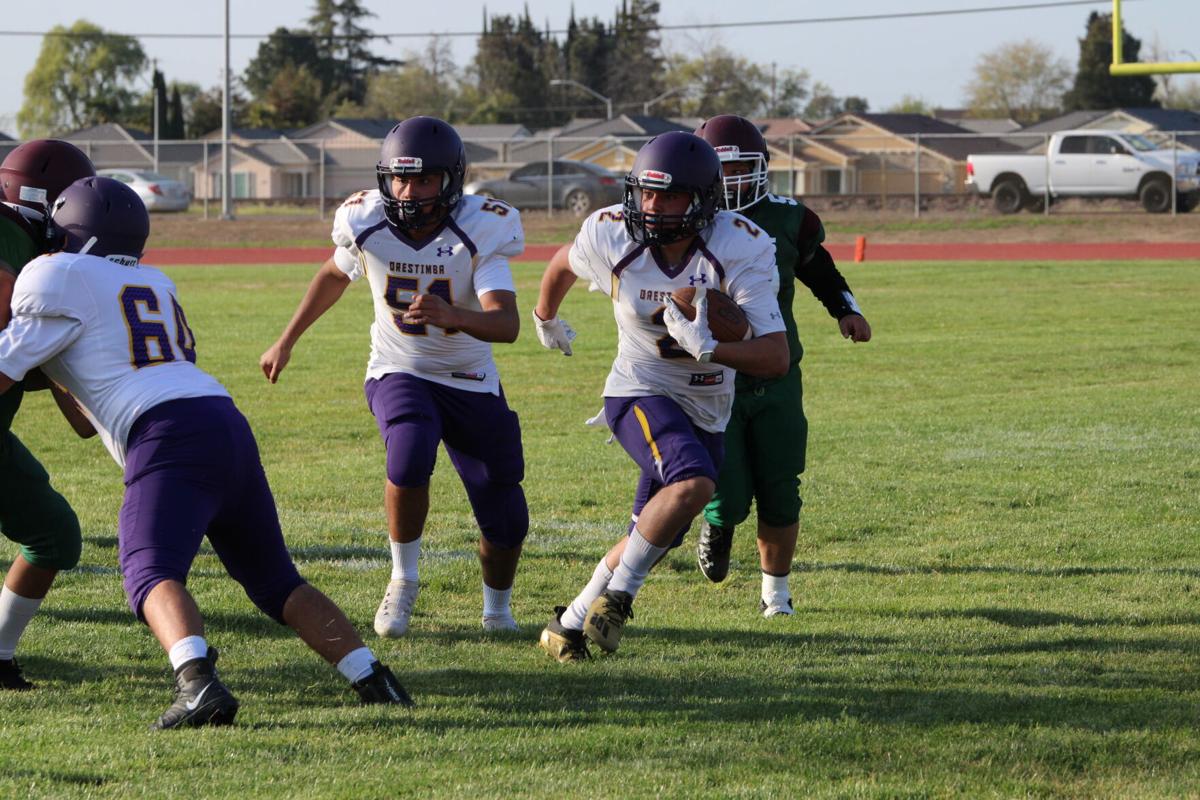 Juan Esquivez looks for running room for the junior varsity Orestimba Warriors in their win over Central Valley last week.

A swarm of Orestimba tacklers converge on a Central Valley ball carrier during the JV Warriors' victory Thursday in Riverbank.

Juan Esquivez looks for running room for the junior varsity Orestimba Warriors in their win over Central Valley last week.

A flurry of first-half points lifted Orestimba’s junior varsity Warriors to a convincing win over the Central Valley freshman team Thursday in Riverbank.

The Warriors built a 35-0 halftime lead and went on to dispatch the Hawks 47-0.

Orestimba shook off a tough night in their opener a week earlier to dominate from the start.

Orestimba’s defense got things going when Jacob Garcia recovered a Central Valley fumble three plays into the game to give the Warriors the ball at the Hawks’ 32. Orestimba needed just one play from scrimmage to capitalize when Alex Millan found Drew Felber for six points. Fernando Navarro’s kick made it 7-0.

A big play on Orestimba’s second possession put the Warriors up 14-0. Drake Perez took a handoff, broke to the sidelines and went 65 yards for the touchdown.

Orestimba struck again on its third possession of the game. A 28-yard completion from Millan to Felber moved the Warriors inside the Central Valley 30 and helped set up a 20-yard touchdown run by Perez. Navarro’s kick made it 21-0.

The Warrior defense came up with another big play when Isaac Monroy recovered a Central Valley fumble at the Central Valley 40. After a 22-yard screen play from Millan to Juan Esquivez moved the Warriors inside the 5, Esquivez punched it into the end zone to extend the OHS lead to 28-0.

Orestimba added a late touchdown when Vincent Lopez hauled in a 35-yard touchdown pass from Millan.

A 10-yard touchdown run by Perez extended Orestimba’s lead on the opening drive of the second half.

A special teams touchdown wrapped up the scoring for the night. Kamran Safdari blocked a Central Valley punt, and Angel Navarro caught the deflection and went 42 yards for a score.

Perez had a big night for the Warriors, rushing for 134 yards and three touchdowns. Millan finished with 121 passing yards. Felber had 58 receiving yards.

Esquivez was on the stat sheet with 27 rushing yards and 23 receiving yards.

“Defensively we came out strong and never let off. Our defense caused four turnovers, putting our offense in excellent field position all night,” said head coach Mario Martins. “You can’t ask more of a defense.”

Offensively, Martins said, the rushing game and screen plays were productive for the Warriors.

“This week we must focus on cleaning up some mistakes and getting better at what we do best, which at this point is our running game and screen game,” Martins commented.