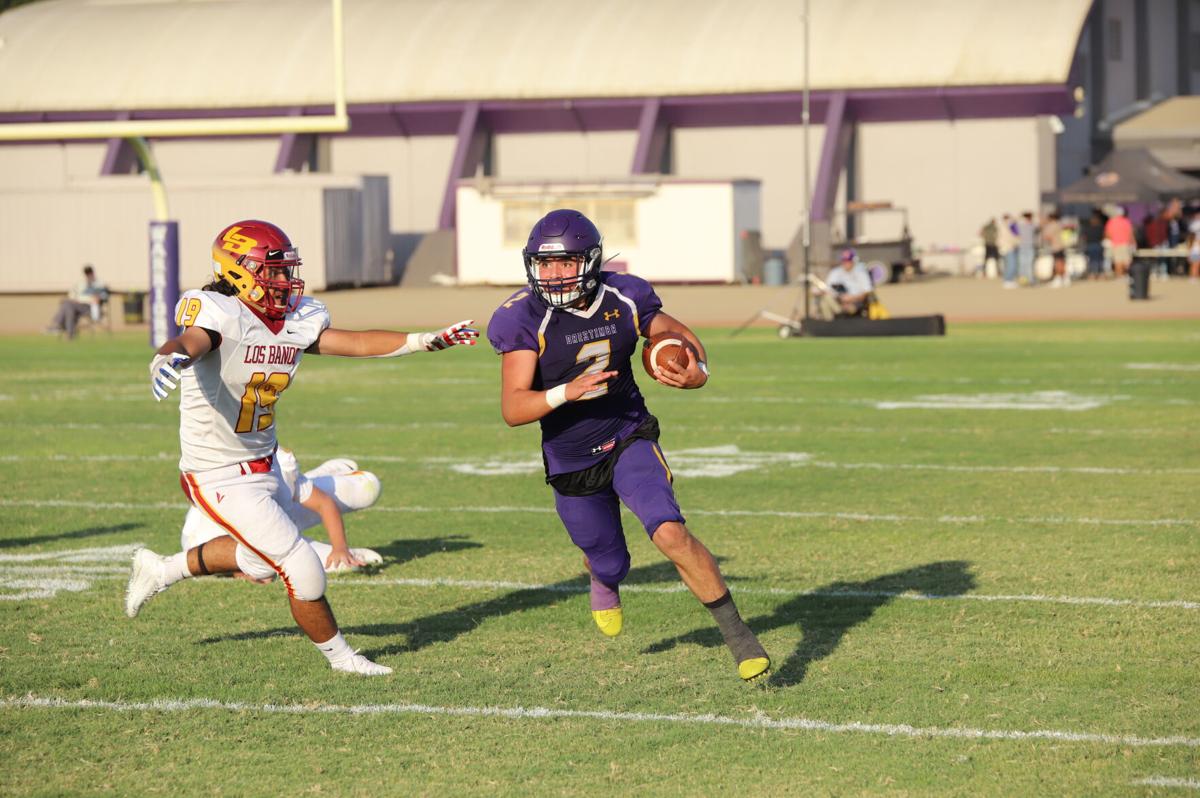 Juan Esquivez looks to out run a Tiger defender as he finds running room on the outside. 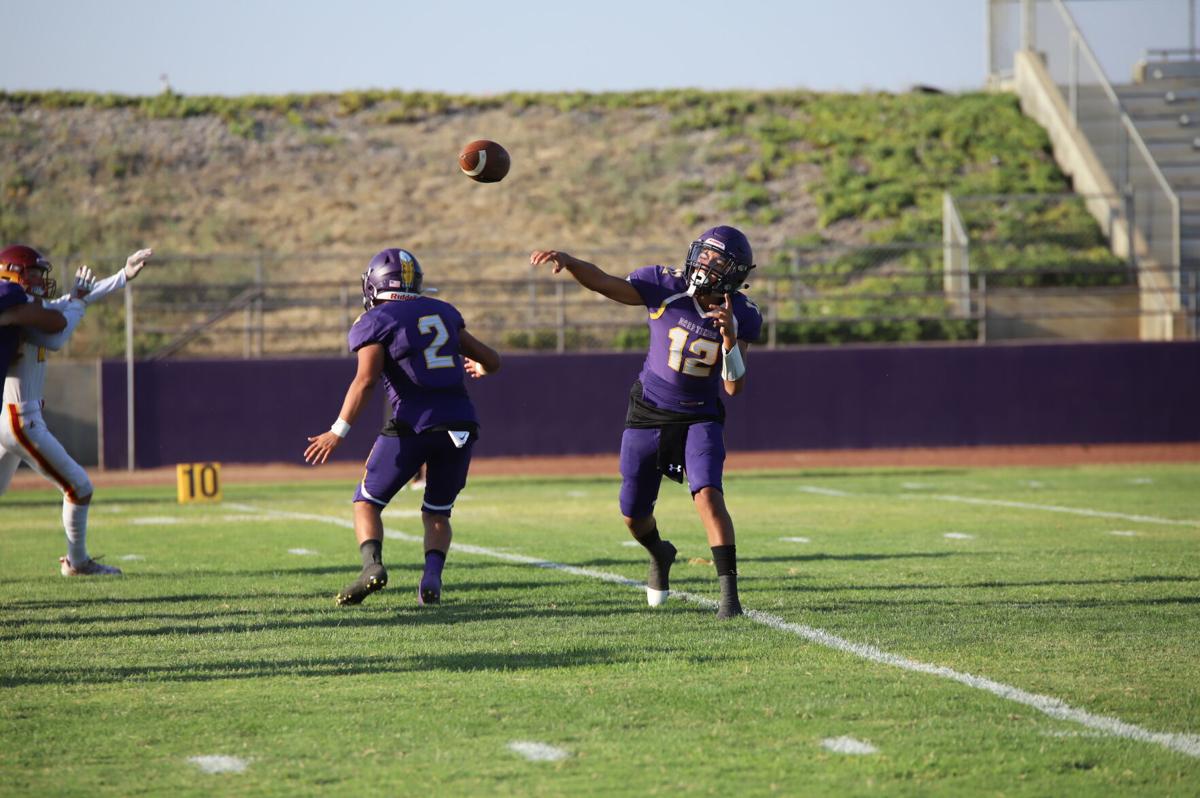 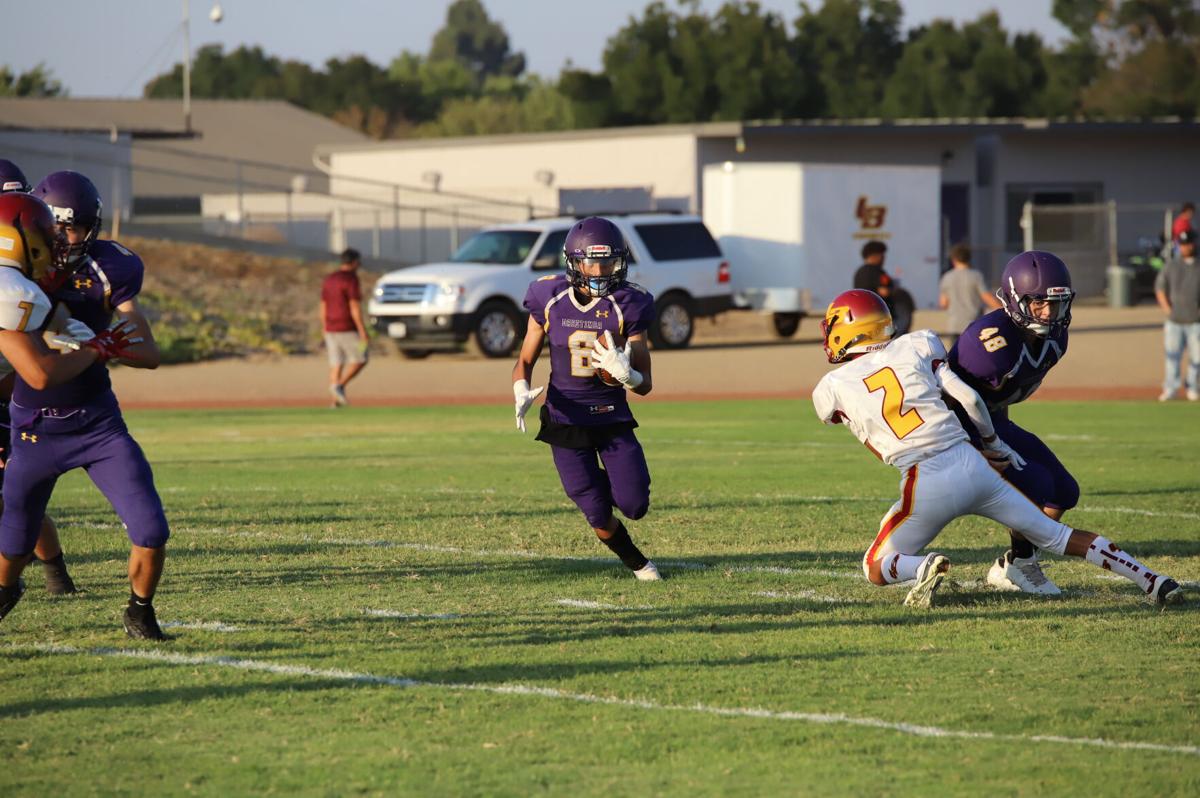 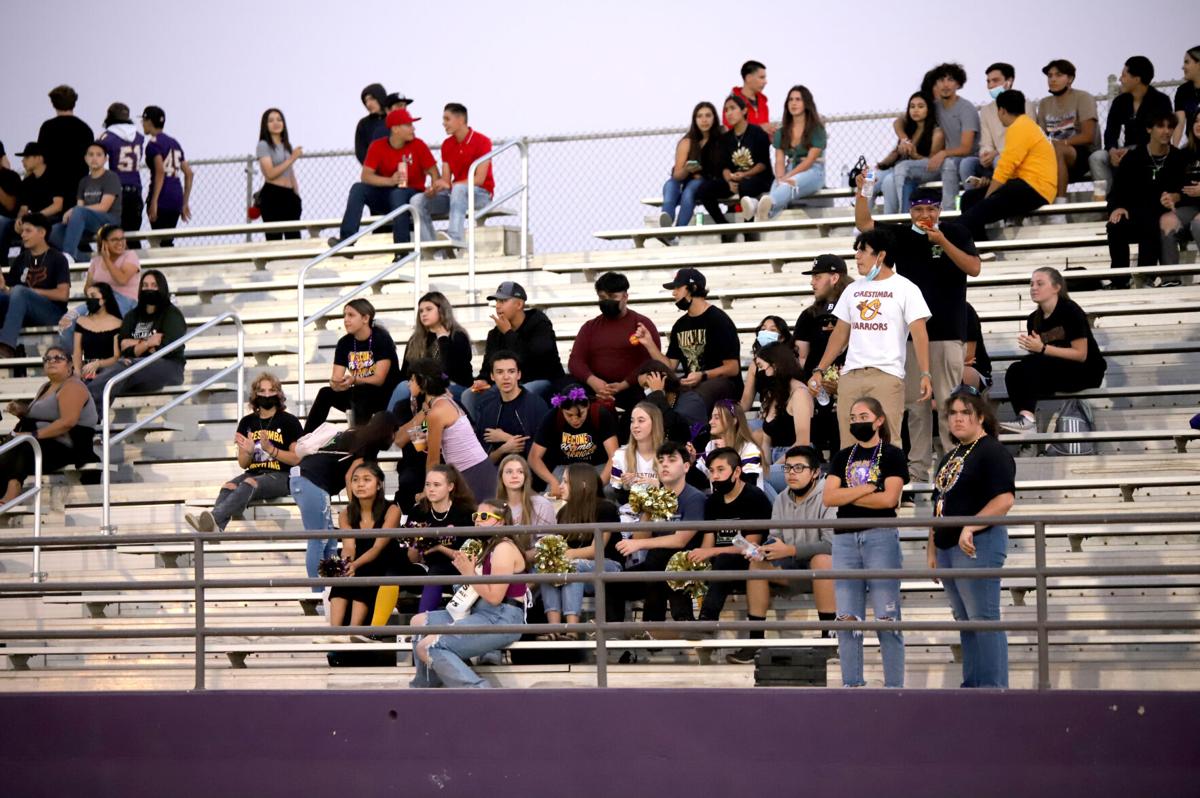 The Orestimba student section the “Purple Zoo” was back in the swing of things showing their school spirit last Friday night.

Juan Esquivez looks to out run a Tiger defender as he finds running room on the outside.

The Orestimba student section the “Purple Zoo” was back in the swing of things showing their school spirit last Friday night.

They treated their fans to a 20-0 victory over the Tigers overwhelming them on both sides of the football and improving their record to 2-1.

The Tigers started off with the ball, and the Warriors came out ready to execute. They got rolling with their first big play of the day on defense when Juan Esquivez came up with a solo tackle on third down that forced the Tigers to punt the ball. Jacob Mar and Esquivez went to work for the Warriors on offense getting huge running lanes provided by their offensive line that put them on Los Banos’ own 14-yard line. On the next set of downs quarterback Jacob Velenzuela hit fullback Jericko Silva on a slant play, in which he broke a tackle and pushed himself into the endzone, giving the Warriors their first touchdown of the evening. The extra point attempt was missed making it 6-0 at the end of the first quarter.

As they entered the second quarter the Warriors fantastic defense once again forced another three and out, causing the Tigers to punt. Orestimba struck again on its following possession, when the the duo of the night Valenzuela and Silva connected again on a 14-yard passing play giving the Westsiders a 12-0 lead in the second quarter.

As the final second in the first half began to tick away the Tigers threatened to score late getting themselves inside the Warriors own 34-yard line. But as before the defense came up huge when a defensive blitz call that saw Esquivez rush from the outside and come up with a big quarterback sack, giving them back the ball and stopping the Tigers. Orestimba went into the break up 12-0.

Entering into the second half Orestimba ran into some negative plays on offense causing them to punt from their own endzone and gave the Tigers the ball. The Orestimba defense went to work as before and were clicking on all cylinders, which  saved them from another threatening scoring attempt from the Tigers and ended the third quarter.

The defense came up big in the third quarter as time began to run out for the visiting Tigers. Silva forced a fumble, causing Humberto Hernandez to pick it up and run it back 17 yards, putting the Warriors in great field position.

A few plays later the Warriors concluded their scoring when Valenzuela took it upon himself on a one yard quarterback sneak into the endzone. They attempted a two-point when Valenzuela hit Silva for the third time that night extending their lead 20-0 and put the game out of reach for Los Banos.

“Defensively, this was the best game we played this season by far,” said Coach mari Martins. “We were able to create turnovers and stop the big play down the field that has hurt us in the past. That night I can say, our defense carried our team by not giving up points, but more importantly giving our offense great field position all night long. This allowed us to have a short field to score on. Our scoring drives were from 40, 29 and 14 yards out. You can’t ask more from your defense.

“Offensively, we were able to put points on the board,” Martins said. “I  felt we left points on the field by having a couple of drives stalled by simple mistakes. However, our offensive line did a good job both in the run and pass game.”

Valenzuela threw for 51 passing yards, rushed for nine yards and a touchdown. Silva had 39 receiving yards with two touchdowns, Esquivez ran for 76 yards on the evening, while Mar accounted for 15 rushing yards.

Nick Cuevas led the defense with five solo tackles on the evening. Silva was credited with four tackles, and a forced fumble. Humberto Hernandez had his hand at four tackles and Esquivez chipped in three tackles. Silva and Esquivez each had a sack.

As the Warriors enter into their bye week, this is a time to regroup and to fix any  mishaps that were noticed during pre-season games before entering into the league schedule.

“It’s always good to head into league with a winning record feeling good about your team,” Martins said. “We have a great bunch of guys that are hungry but we have to use this bye week to heal up and clean up mistakes. We head into  Le Grand  two weeks from now and we have to be ready because it’s always hard to play down there. They fill their stands and are one of the  loudest  stadiums we play in.”

On Sept. 17, the Warriors will travel to Le Grand for their first league game. Game time will begin at 5 p.m.