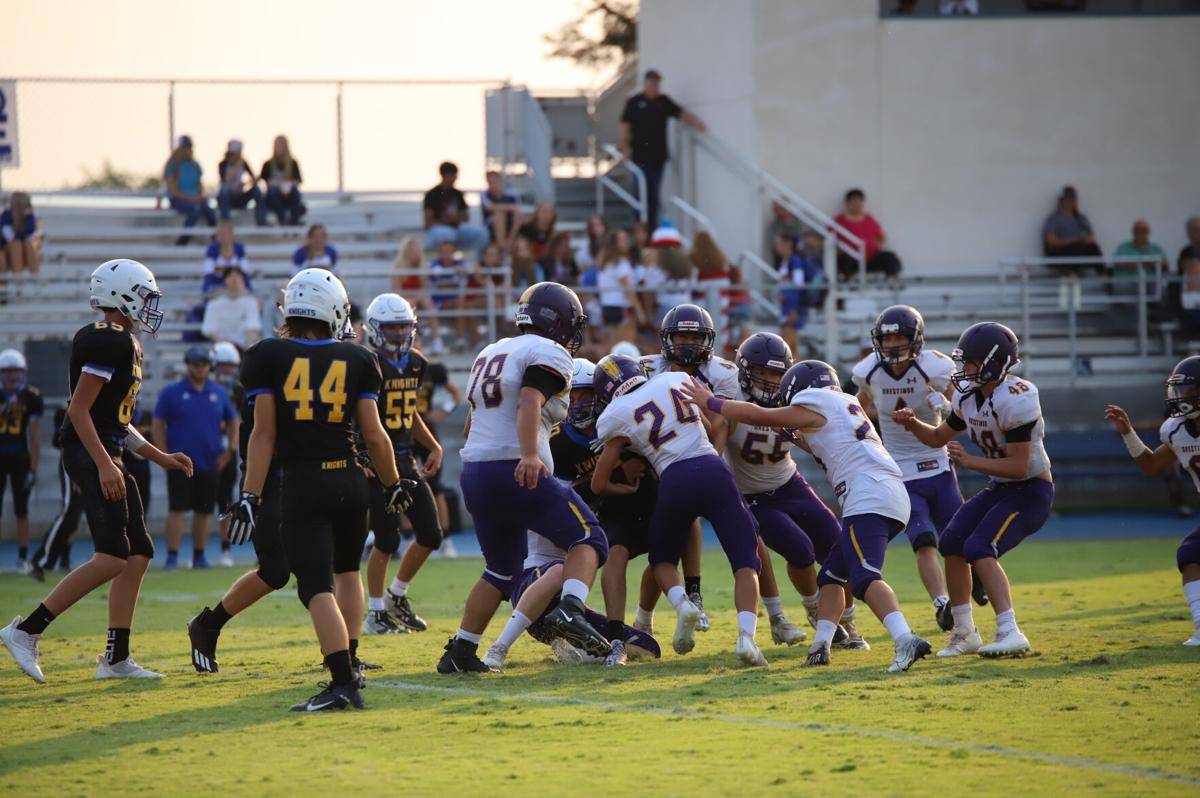 A swarm of Warriors make the tackle on a Knights ball carrier. 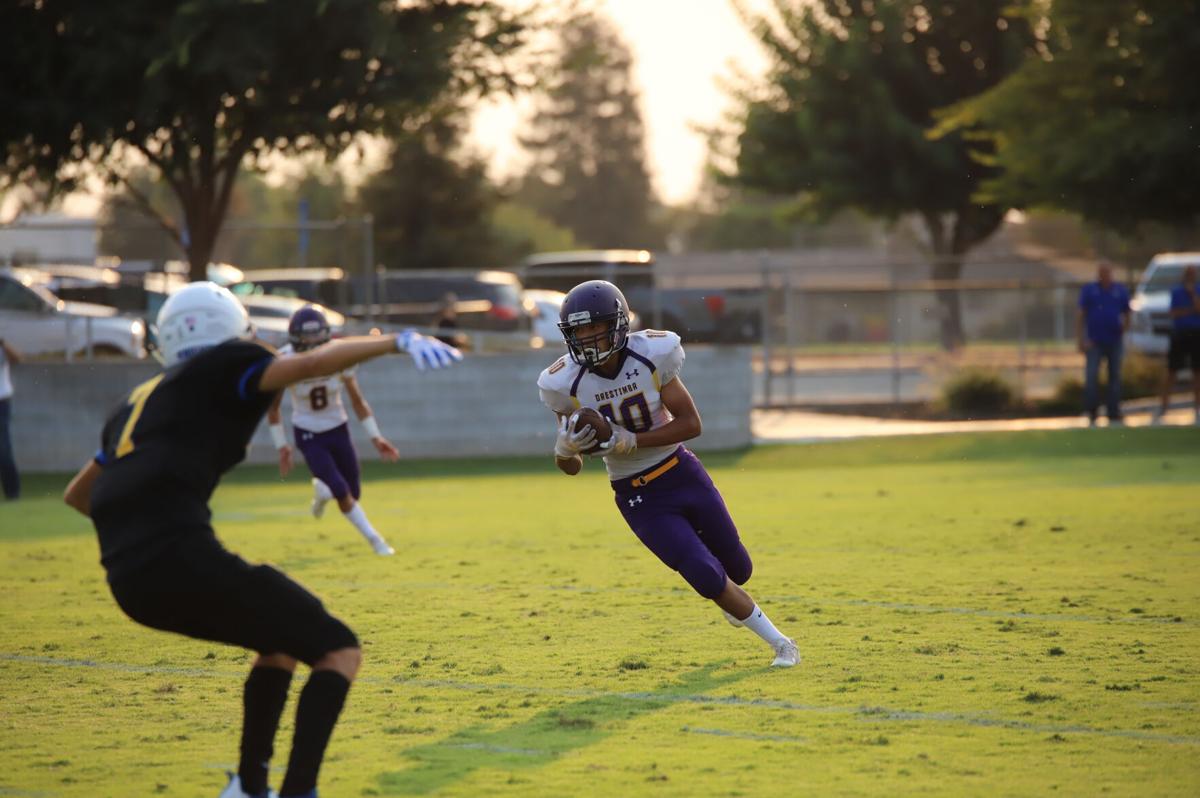 Orestimba’s Ariel Medina looks to make a move on a Ripon Christian defender. 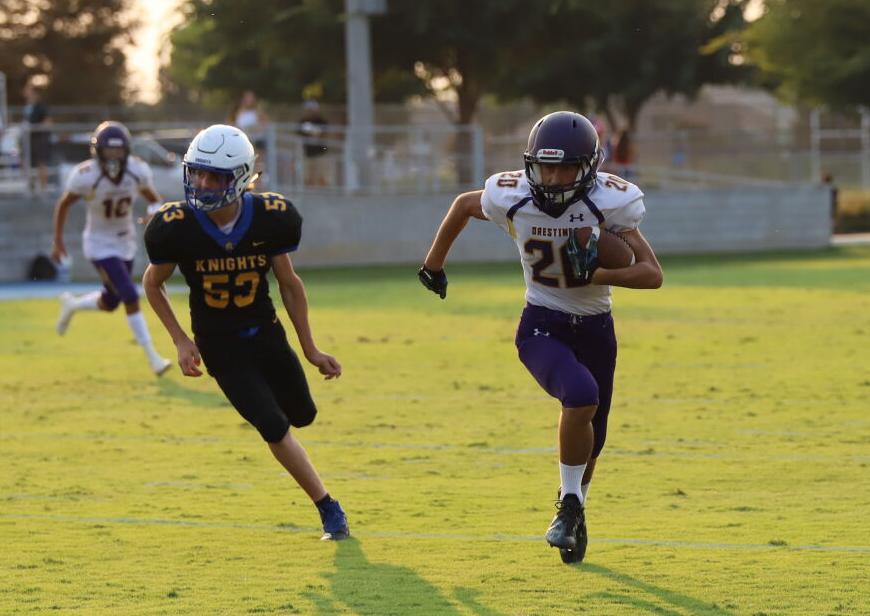 Warrior receiver Drew Felber finds room on the outside and looks forward to the endzone.

A swarm of Warriors make the tackle on a Knights ball carrier.

Orestimba’s Ariel Medina looks to make a move on a Ripon Christian defender.

Warrior receiver Drew Felber finds room on the outside and looks forward to the endzone.

The JV Warriors put on another show for their fans last Friday night, when they traveled to Ripon to face off against the Ripon Christian Knights. The Warriors did not let up one bit when they had a 28-7 halftime lead.

They took that dominating momentum into the second half having a great rest of the evening racking up more points taking it in the final with a score of 44-15. The Warriors improved their record to 4-1 overall and 2-0 in league.

The Warriors opened the flood gates right away when sophomore safety and receiver Jacob Mar stepped in front of a Knight’s pass and brought it back to good field position for Orestimba to start off their evening. On the next set of downs, Quarterback Jacob Valenzuela found tightend Nathan Archuleta on a 7-yard pass, and with the extra point the Warriors lead early 7-0.

Another turnover for the Knights lead to another Westsider score. Valenzuela took it upon himself to get the Warriors in great field position lining up Mar to punch it into the endzone on an 8-yard run. The point after was good, giving the Warriors a 14-0 lead.

The Knights took a possible shut out from the Warriors when they marched straight town the field and connected on an 8-yard passing play to make it 14-7. Cutting the lead to just one score with just nine minutes left in the second quarter.

It didn’t take long for the Warriors to send more of a dominating message to Ripon when on the first play with the ball back Valenzuela connected with one of his key receivers — Jacob Mar — on a 22-yard passing play putting them straight on Ripon Christian’s own 48 yard line. A hand off was given to Jericko Silva, who powered his way into the endzone down the middle of the field to extend the Orestimba lead 21-7.

The defense came up big with an interception from Ariel Medina who set up a great scoring play on the next offensive drive. With just under a minute left in the half, Valenzuela found Drew Felber on a 25-yard pass to put them on the five yard line. With time running out and wanting to score once more, Mar was found in the corner of the endzone for their fourth touchdown of the evening, extending their lead 28-7 to end the first half.

The Warriors came back out after the break keeping the same rhythm from the first half when the offense rolled straight down the field into Ripon Christian’s own  two yard line, where Valenzuela capped off on a quaterback sneak to make it 35-7.

The Knights came back with a huge play of their own when they connected on an 84-yard passing touchdown. They were successful on the two-point conversion to cut the lead 35-15 with three minutes in the third quarter, but unfortunately this was the last time they scored.

For the Warriors final scoring of the day, they had a well balanced offensive attack, allowing themselves to get into scoring position. Valenzuela hit Felber for the passing touchdown, which extended their lead to 41-15 and that ended the game.

“Offensively, I believe we played our most complete game of the season. We were very balanced throwing and running the ball, totaling over 300 yards on offense and scoring six touchdowns,” said head coach Mario Martins. “Defensively, we started off strong with back to back defensive takeaways, giving our offense great field position. We also had a total of three takeaways on the night and not letting Ripon Christian get into any kind of offensive rhythm.”

This week  the Warriors will host the Mariposa Grizzlies, but due to COVID-19 protocol they will be coming into the game with a smaller squad. The Grizzlies who are 0-2 are coming to look for their first league win against Orestimba. Game time starts at 5 p.m.

“This week we have Mariposa coming in with a small squad due to COVID-19 issues which has plagued them all season long. They will still be Mariposa, which means they should be tough up front and have good skill.”