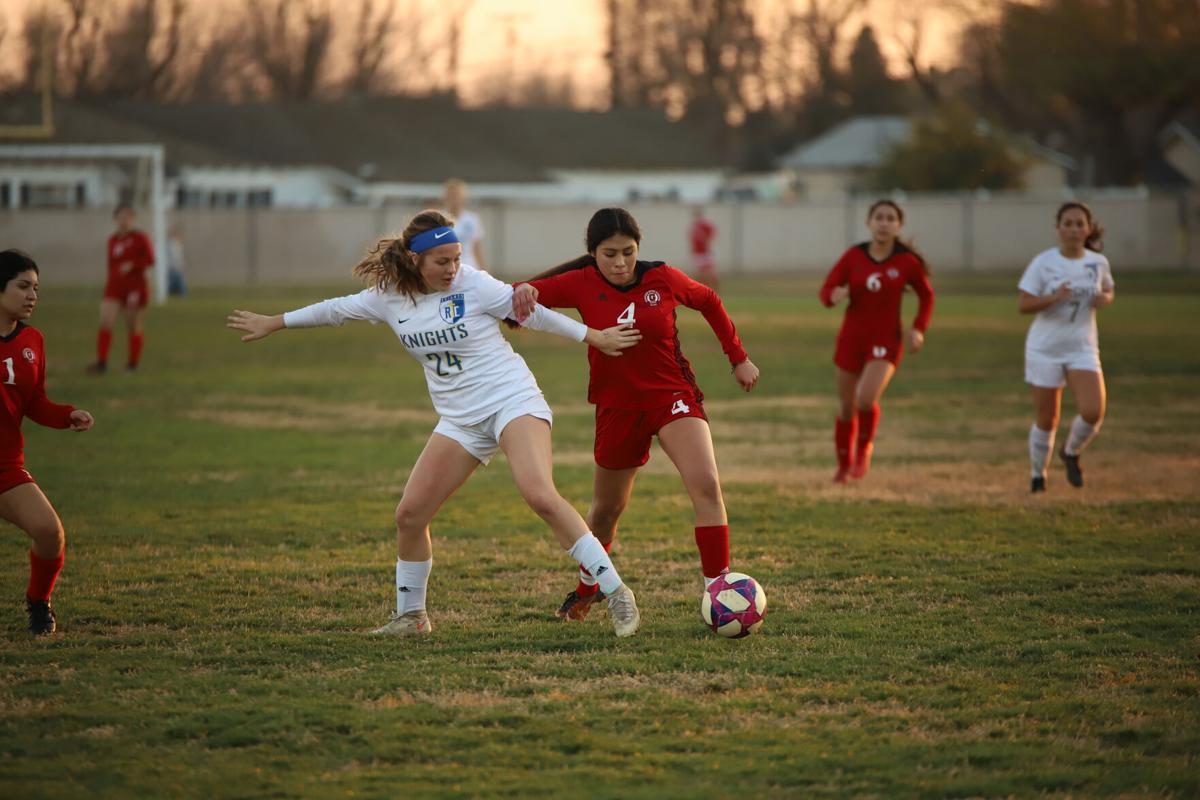 Forward Leilani Aguileria fights against a Ripon Christian player for possession of the ball during their match up last Thursday evening. 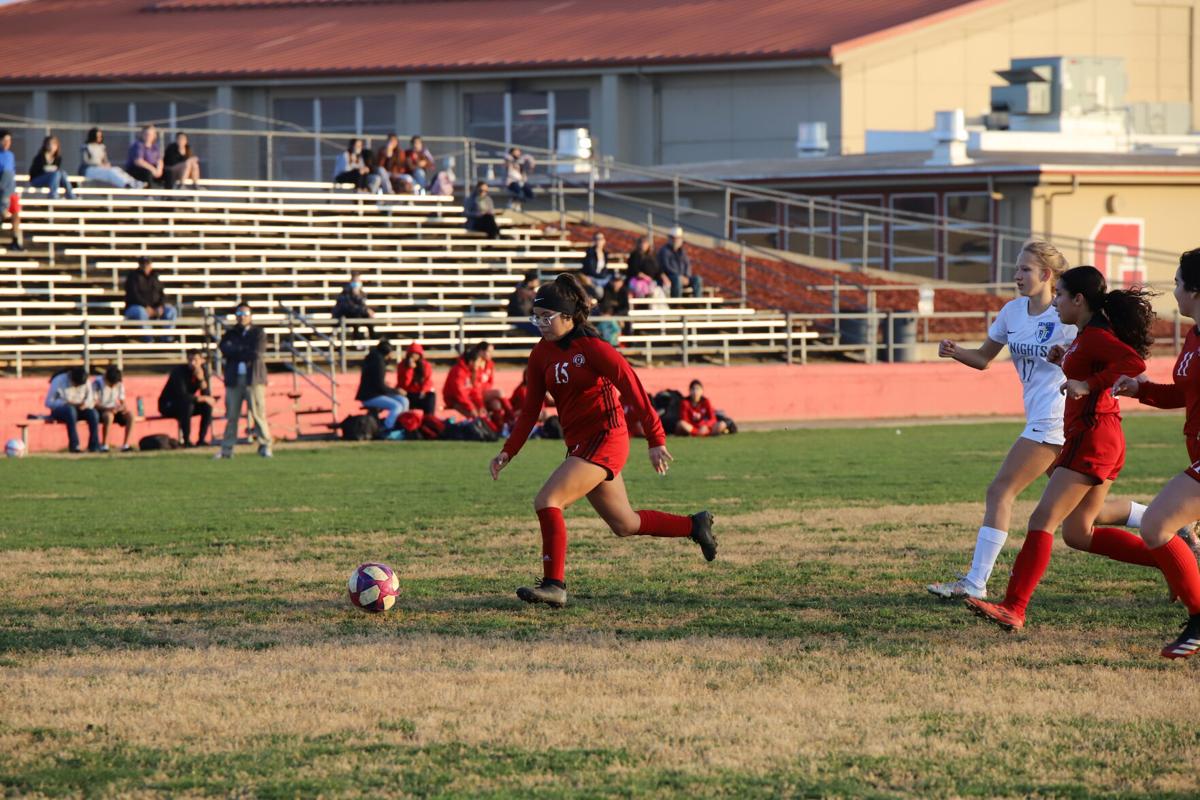 Gustine’s Monse Aguayo makes room for herself on a fast break. 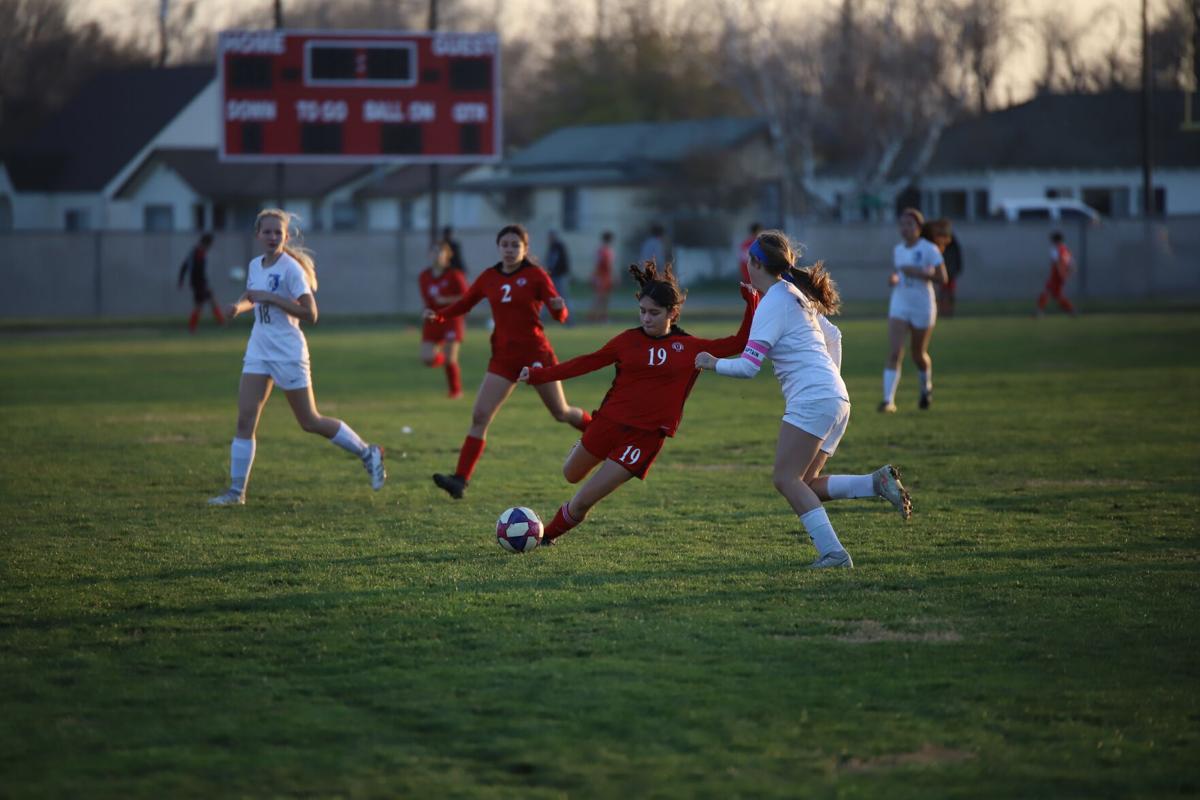 Lady Reds strikerAnahi Alvarez looks to make the long pass to a teammate down field.

Forward Leilani Aguileria fights against a Ripon Christian player for possession of the ball during their match up last Thursday evening.

Gustine’s Monse Aguayo makes room for herself on a fast break.

Lady Reds strikerAnahi Alvarez looks to make the long pass to a teammate down field.

The Lady Reds returned to the field Jan. 3 in a Southern League game against the host Le Grand Bulldogs (0-3). Before coming into this league match up Gustine was coming off two great victories during the Christmas break against the Big Valley Christian Lions and Stone Ridge Christian Knights in non-league match up games, where they shut out both teams in a combined 5-0 score.

Gustine (1-0-1) continued that rhythm and shut out the visiting Bulldogs 10-0 and had seven players contributing to the shut out.

The Reds’ stonewall defense and great offensive ball movement guided them to the amazing first win in the Southern Athletic League.

Lead Lady Red Leilani Aguileria led the way with a hat trick performance of three goals. Right behind her was Christina Navarro with two, and Nayeli Padilla, Anahi Alvarez, Crystal Pinal, Lesly Haro and Yeissel Martinez each had one goal.

In game number two of the week the Gustine Reds hosted another home game match up against the visiting Ripon Christian Knights (2-0-1), who earlier in the week defeated the Reds’ Highway 33 rival the Orestimba Warriors in a 3-0 victory.

The Lady Reds and Knights would have a scoreless first half with Ripon Christian having a higher ball possession percentage than the Reds, but they were able to counter with great defensive schemes keeping the ball out of the goal.

Entering into the second half both teams looked to come out with a different demeanor than the first half. The Knights were able to pull off a goal in the first few minutes of the game, breaking down the Reds defense for the first official strike of the game.

As for Gustine, they would answer back around the 20 minute mark with a goal of their own when forward/striker Aguileria went off on a fast break in a one on one situation against the Ripon Christian goalkeeper, putting it in the back of the goal. The game was even at one apiece and ended in a draw.

Coming up later in the week the Lady Reds will once again host two home games, matching up against the Mariposa Grizzlies and Delhi Hawks. Start times for both games will begin at 5 p.m. for varsity.