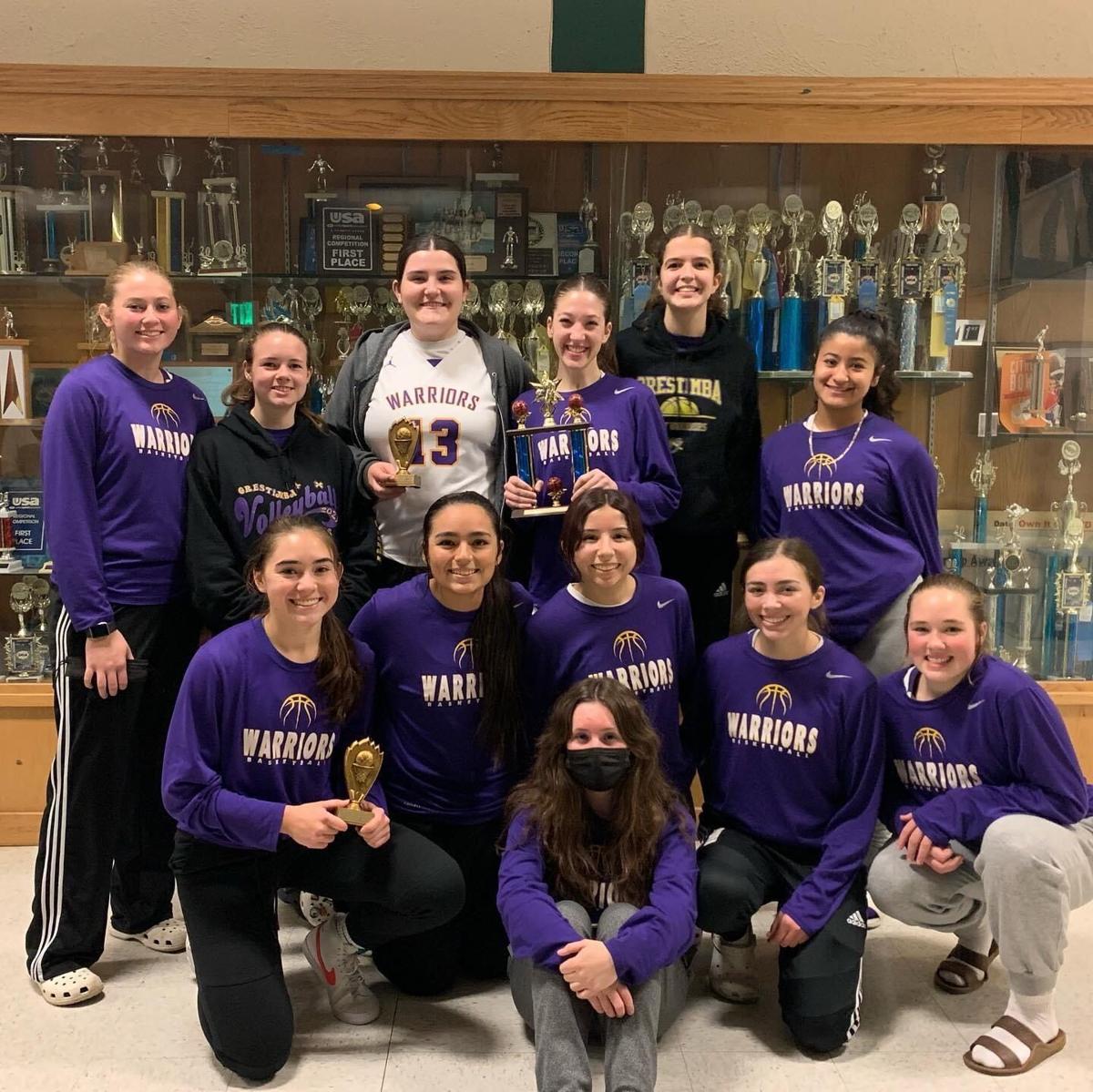 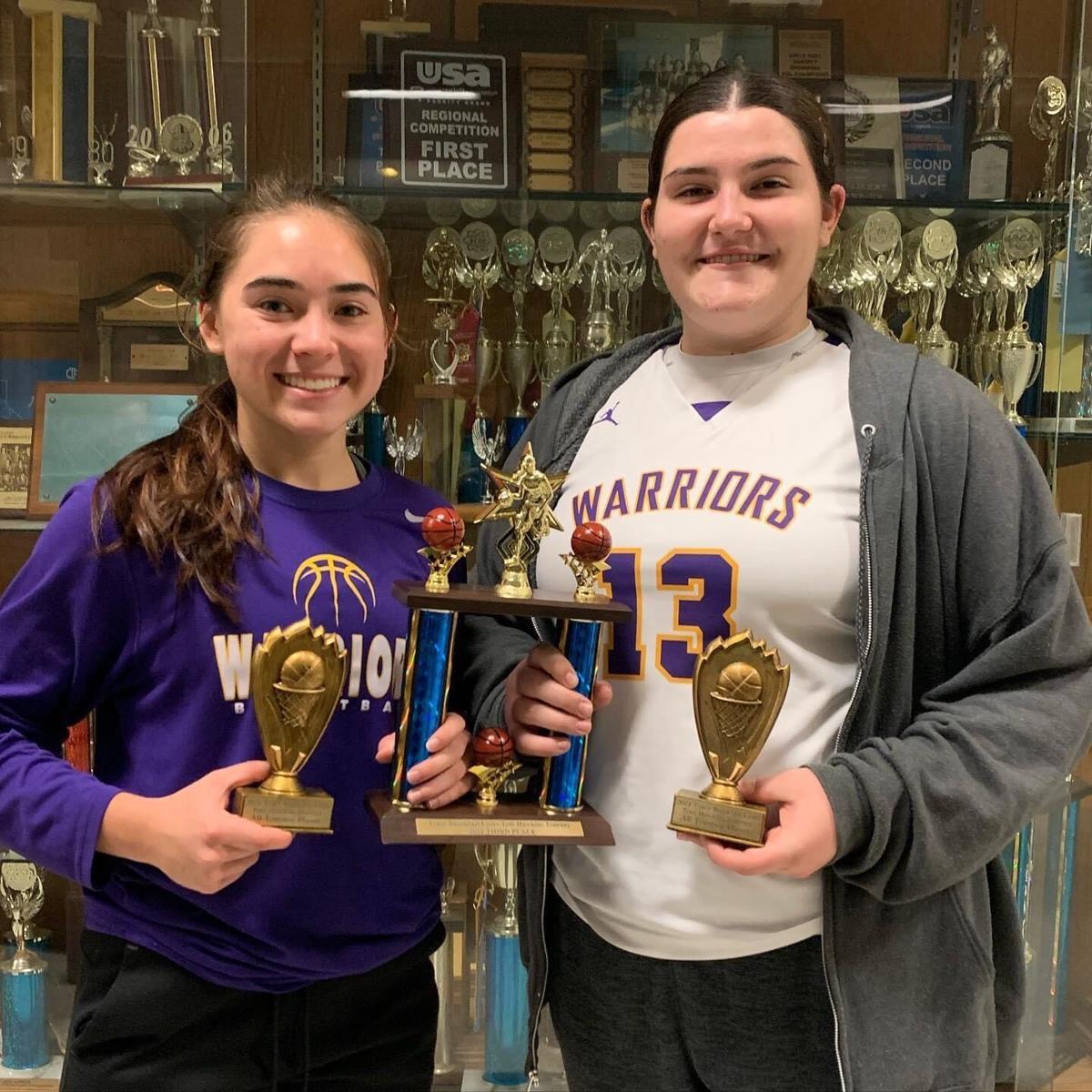 Reagan Marroquin (left) and Ciera Thibodeau were both awarded the All-Tourney Award during the tournament.

Reagan Marroquin (left) and Ciera Thibodeau were both awarded the All-Tourney Award during the tournament.

Over the course of four days from Dec. 27 to Dec. 30, the Lady Warriors entered into the Tracy Breakfast Lion Tournament with 16 teams from all around the area competing for the first place trophy.

The Warriors, in their third tournament of the season, received the third place title adding another top three spot to their trophy case. They began the first two games of the tournament rolling past Downey High from Modesto, and Ripon High. They then fell short in the final minutes of the fourth quarter, losing against Lathrop. The loss sent them to the consolation championship where they beat Enochs High from Modesto and earned the third place trophy.

Seniors Reagan Marroquin and Ciera Thibodeau were named to the All-Tourney team.

In the consolation championship game against the Enochs Eagles, the Lady Warriors had three players in double digits that led them to a strong 53-36 victory to end the tournament.

From the start of the game the Lady Warriors were leading each quarter by at least five or more points. Great ball movement and shot selections in this final game granted the Lady Warriors momentum throughout the game. From within perimeter the Warriors shot 41% going 16 for 39 as a team, while shooting a season high of 75% from the free throw line, going 6 for 8 as a unit.

Kelsey Maninha and Jackie Lujan both chipped in two points each that helped lead the Lady Warriors to their victory.

To kick off the tournament the Warriors faced off against the Downey High School Knights, and in the first quarter they dominated by taking an early 19-2 lead. They continued that momentum into the break with a 30-10 lead over the Knights. Downey went on a 28-15 run between the two last quarters, but it would not be enough to come out on top over the Warriors as they took a strong 45-38 victory.

Thibodeau led the offensive with a double-double scoring 20 points, where 11 points came from the first half and had 15 rebounds. Marroquin was not far behind with 14 points, seven steals, and six rebounds. McCauley contributed seven points going 2 for 4 from 3-point land. Both Lujan and Taylor Gray added two points each to the Warrior’s stat sheet.

In game number two of the tournament the Warriors went up against the Indians from Ripon High School and took a 45-33 win to advance to the third round with two wins under their belt.

Orestimba rallied into half time with a 32-13 lead and lead by as many as 15 by the end of the third quarter. In the fourth the Indians went on a 10-7 run but it wouldn’t be enough to keep up with the Warriors, who went 16 for 24 from the perimeter throughout the game to secure their victory.

Orestimba’s big three of Thibodeau, Marroquin, and McCauley led the offesne. Thibodeau added another double-double to her stats with 20 points and 12 total rebounds. Marroquin had 10 points with two assists and two steals, as McCauley had her hand at eight points, and three steals. Orestimba struggled beyond the arc, going 4 for 22, which forced them to score most of their points in the paint and the perimeter.

In game three it was an electric and intense match up between the Lathrop Spartans and Warriors to determine who would advance to the championship game. The Spartans were the Warriors toughest opponent of the tournament.

At the start of the fourth quarter the Warriors were leading 31-30. It was a back and forth scoring match up between the two in the final quarter. As they got down to the final two minutes of the quarter the Spartans were leading by just two points, enough for the Warriors to reach a comeback. But turnovers and fouling plagued the Warriors in their chances of advancing to the championship game, letting Lathrop nab the victory.

Lujan and Taylor Gray had two points each as Sotelo contributed a free throw.