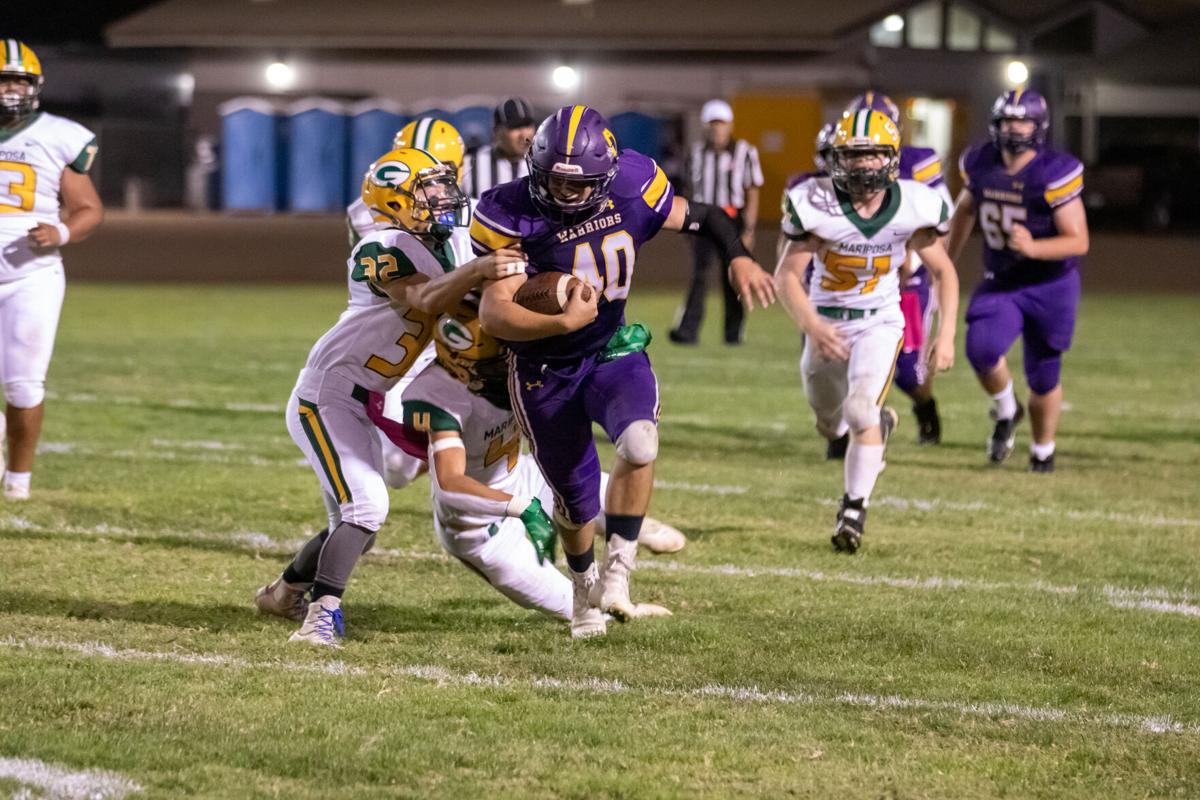 Kai Brazil looks to turn up field from the grip of a Mariposa defender. 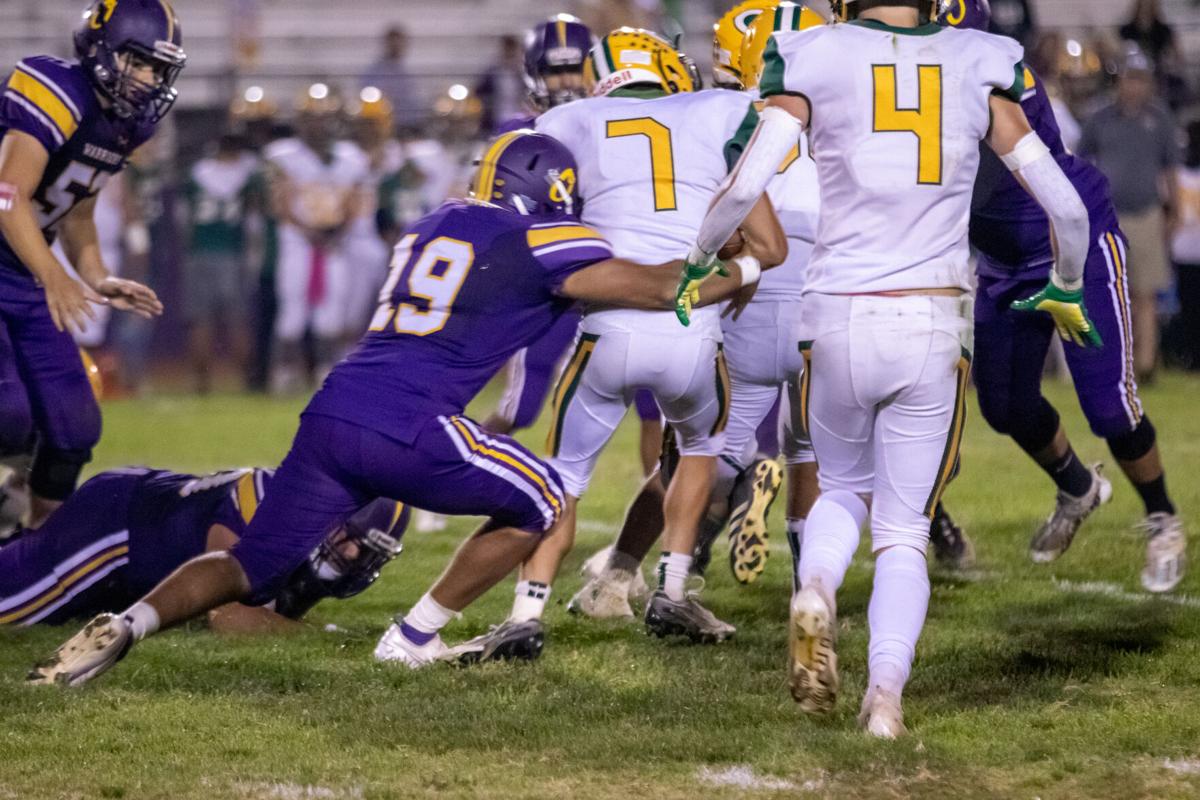 Elias Camacho (19) gets a hand on the Grizzle ball carrier and attempted to bring him down. 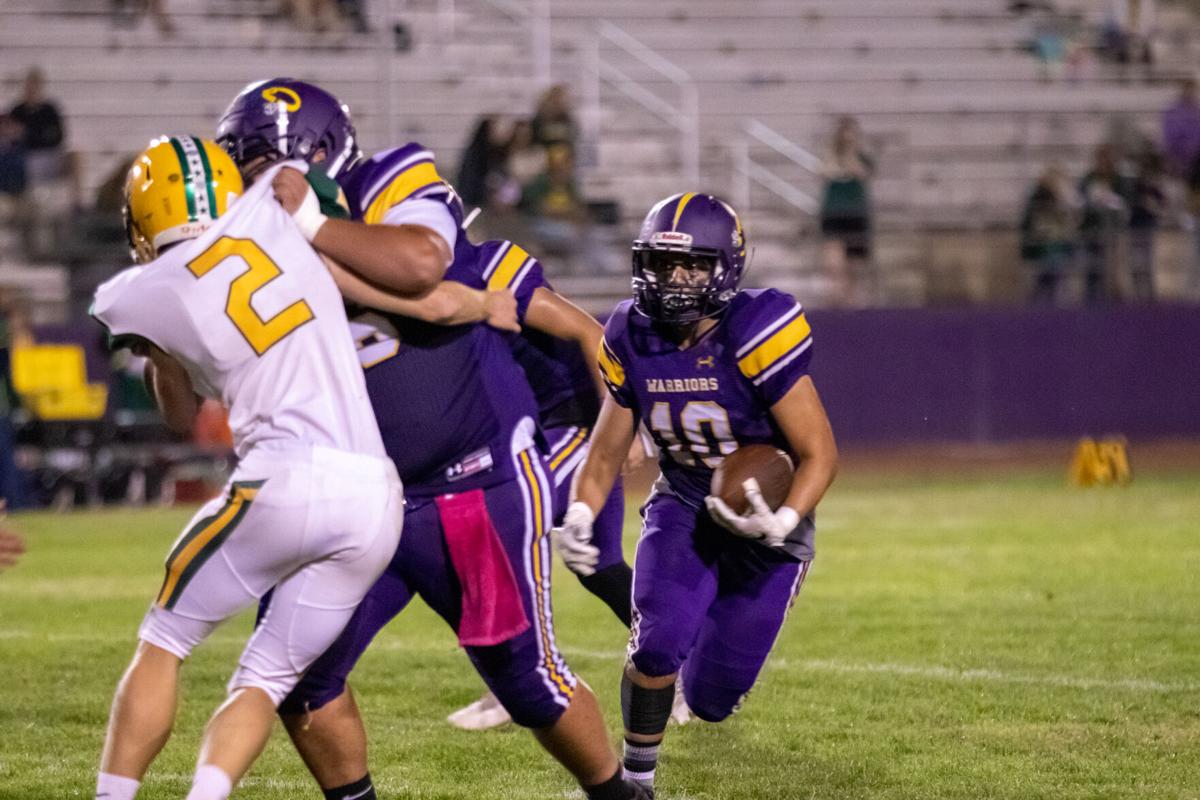 Juan Alvarado takes the hand off and receives a great block from his lineman up front.

Kai Brazil looks to turn up field from the grip of a Mariposa defender.

Elias Camacho (19) gets a hand on the Grizzle ball carrier and attempted to bring him down.

Juan Alvarado takes the hand off and receives a great block from his lineman up front.

Last Friday night, the Warriors came ready and focused on a mission to come out with a victory to put them back on track in the Southern Athletic League. A huge difference compared to two week ago when in their match up against the reigning SAL champs Ripon Christian, they fell 45-42 after not being able to punch it into the endzone with 12.9 seconds left on the clock.

As Orestimba came into this game it was non-stop work for all four quarters, which lead to a 41-7 victory over the visiting Mariposa Grizzlies (2-1 SAL, overall 3-3 ) Friday night.

“For the past two week we ended in heartbreaks and that was really tough on us,” said Head coach Aaron Souza. “Despite their being no JV, yeah it felt weird, but we came out with great energy and ready to play and we were definitely a whole new team out there Friday night.”

In the first half of the game Vincent Lopez single-handily helped put his team on the scoreboard by having one rushing touchdown in the first quarter and then later having an incredible three more rushing touchdowns in the second, bringing the score to 28-0 at the half. Lopez completed 2 of 3 passes for 37 yards and was also the team’s leading rusher with 180 yards and four scores on 10 attempts.

“This kid is just an amazing overall athlete. He brings great energy to every practice and it reciprocates into the game,” said Souza. “He’s very respected on the team and that’s been changing our dynamic overall.”

Souza shared when the score was 14-0 at the beginning of the second quarter the momentum shift was felt on a kickoff when Orestimba’s Pedro Barajas leveled their kick returner causing the ball to come loose and allowing Elijah Hopkins to jump on it, giving the Warriors back the offensive possession. They scored four plays later and the game was never the same after that.

Coming back from the break Orestimba was in full control and continued with their high energy.

Kai Brazil, who had a big night for himself at the running back position, received 20 carries for 143 yards and one touchdown. His first score came at the start of the third quarter when his team put him in great position at the Grizzlies own 10-yard line, where he was able to punch it into the endzone to extend the Warriors lead 34-0.

The Grizzlies stopped the shut out mid-way through the fourth quarter when they broke free on a 15-yard rushing play to make the score 34-7. But the Orestimba’s hard nose defense and great offense caused that to be their only score of the night.

Orestimba topped off their scoring for the night in their final play when Juan Alvarado scored on a 20-yard ran play to end the game with a final score o f 41-7.

“Defense had an incredible game as well, they only let up one touchdown,” said Souza. “Along with that they had an incredible night with 11 sacks total. The defensive line had a great game and they deserve all the glory as well for the win.”

Drake Perez (nine rushes, 37 yards) and Jayden Vargas (three receptions for 73 yards) were other contributors on the offense. Orestimba out played the Grizzlies, 473-278 in all purpose offensive yards.

On the defensive side of the ball Perez and Brazil led the way with four tackles, Gerardo Torres contributed three, while Julian Perez, Cyrus Carpenter, Chance Ashley, Barajas, Tristan Brace, and Sebastein Barrientos each chipped in two tackles. Including Joseph Flores they all contributed on the big night of 11 sacks.

“Despite their record I believe this is the best Delhi team since 2016. They are a run heavy team and they are extremely physical,” Souza said. “From now on we are going to be playing each game week by week. They like to drain the clock so we’ve got to score when we have ball possession and stop them when on defense and that’s how we’ll come home with a victory Friday night.”