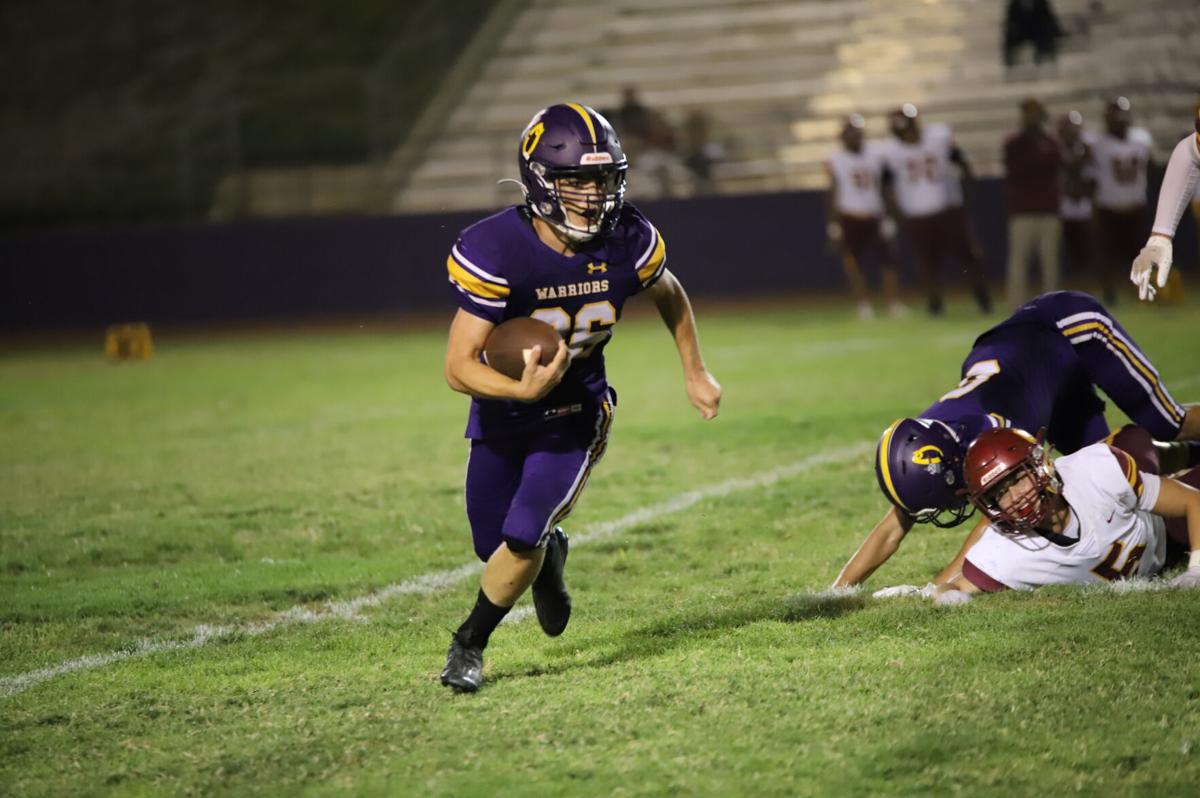 Drake Perez receives a great block from his teammate to gain some more yards in last week’s victory over the Los Banos Tigers. 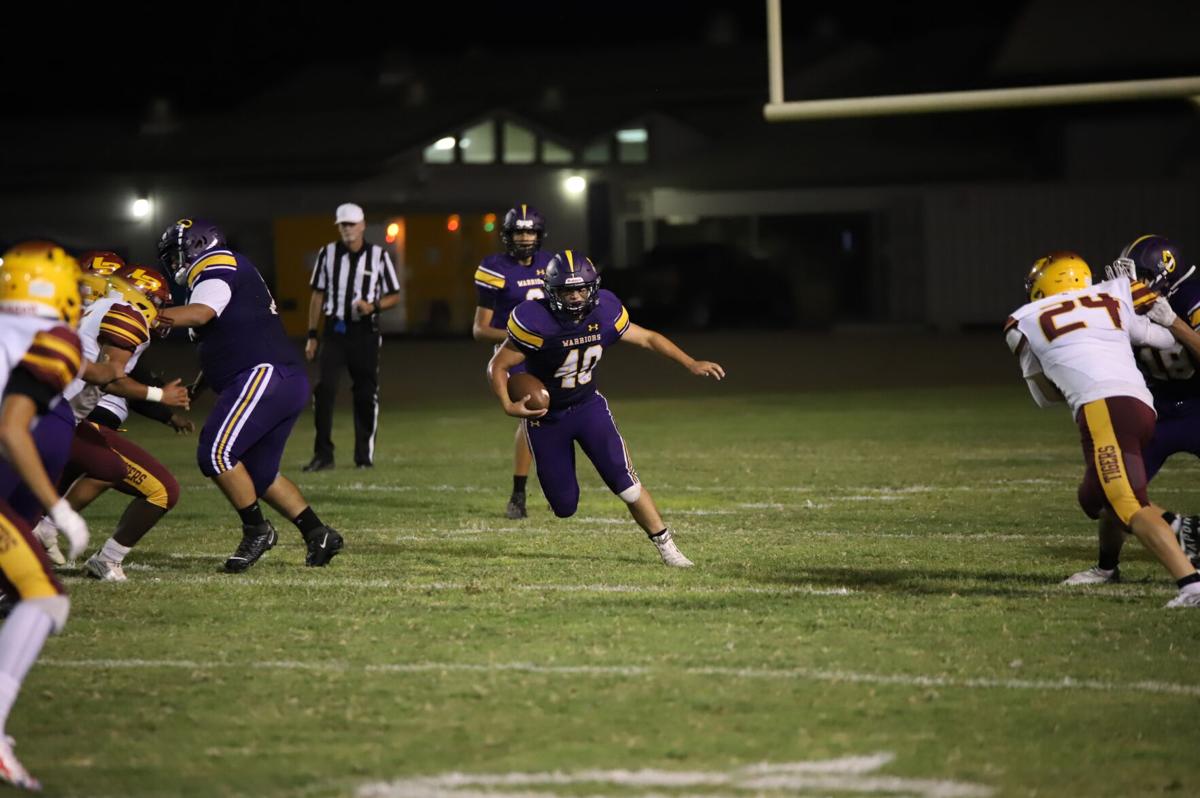 Lead rusher of the night Kai Brazil sees the wide open hole and looks to turn up the field.

Drake Perez receives a great block from his teammate to gain some more yards in last week’s victory over the Los Banos Tigers.

Lead rusher of the night Kai Brazil sees the wide open hole and looks to turn up the field.

The Warriors put their fans at high stress but was an overall great game as they took the victory over the visiting Los Banos Tigers in the final seconds of this nail-biter Friday night.

Orestimba came into this game at an even 1-1 record and was looking for a confidence booster after taking a tough lost to the Hughson Huskies two weeks ago.

The game though was decided in the final seconds when Los Banos attempted a two-point conversion to win it but failed as time expired.

“This was a wild one, and kept everyone on their toes for sure,” Orestimba Coach Aaron Souza said.

The WestSiders came out ready to battle as the game began. Quarterback Alex Millan hit Jayden Vargas on a big passing play for 70 yards to put the Warriors up 7-0 early in the first quarter.

A few plays down the line and a change of offensive possession had the Warriors ready to strike again to add more to their lead. When Millan threw a 45-yard pass to senior receiver Devin Bettencourt he hauled it in for a touchdown to make it 13-0.

With the Tigers trailing right behind, and putting themselves in great field position at the Warriors own 28-yard line, the Tigers came out strong punching it into the endzone with a 28-yard rushing play to end the first quarter just trailing the Warriors 13-6.

A hard fought second quarter was played by both offense and defense from both sides. Midway through the second quarter Alex Millan went down with a dislocated shoulder to put the Warriors in a pickle to find a back up for the rest of the game. The Tigers took advantage of this trauma from the Warriors, and answered with another touchdown going seven yards on a passing play, making it 13-13 due to a missed extra point attempt, going into the half.

“Since the beginning of this game we had great energy that allowed us to go up 13-0 in the first,” said Souza. “Also with Millan hurt we had to figure out our guy for QB and Devin Bettencourt stepped up for us.”

With a scoreless third quarter this moved a lot of momentum and the start of a thriller game in the fourth quarter.

Back up quarterback Devin Bettencourt stepped up for the Warriors when he hit Jayden Vargas on his second big receiving gain of 78 yards for a Warrior touchdown taking their lead 20-13.

As the clock began to wind down to just about 15 seconds left the Los Banos Tigers shocked the home crowd as they hit an eight yard pass to the endzone to make it a 20-19 game. The Tigers once again lined up on the line of scrimmage to attempt the two-point conversion but failed to punch it in for the win as the Warriors were just able to escape defeat in the final seconds.

Jayden Bettencourt has a spectacular game to lead the offensive unit with three receptions for 176 yards and two touchdowns. Bettencourt added three catches for 66 yards and one touchdown. For your rushers Kai Brazil with his hard running on the night had 72 yards on 15 carries, and right behind him Drake Perez had 10 carries for 29 yards.

The defensive unit for the Warriors had a good night with players flying around and making great tackles. Kai Brazil led the unit with seven solo tackles, right behind him was Pedro Barajas with six, Drake Perez added four, Adrian Reyes chipped in three, while Nathan Richards and Gereardo Torres each collected two tackles. Chance Ashley, Brazil, Barajas, Torres, and Joseph Flores each had a sack on the night.

As the Warriors take a bye week this upcoming Friday Souza shared that this is a time for players to get healthy, and to go over anything that needs to be fixed before league schedule hits the following week.

“We are going to prepare this bye week and take full advantage of it and also just figure all our mistakes, while giving the players the breather they deserve,” Souza said.

In two weeks the Warriors will face off against Le Grand as they travel to their stadium, game time starts at 7:15 p.m.