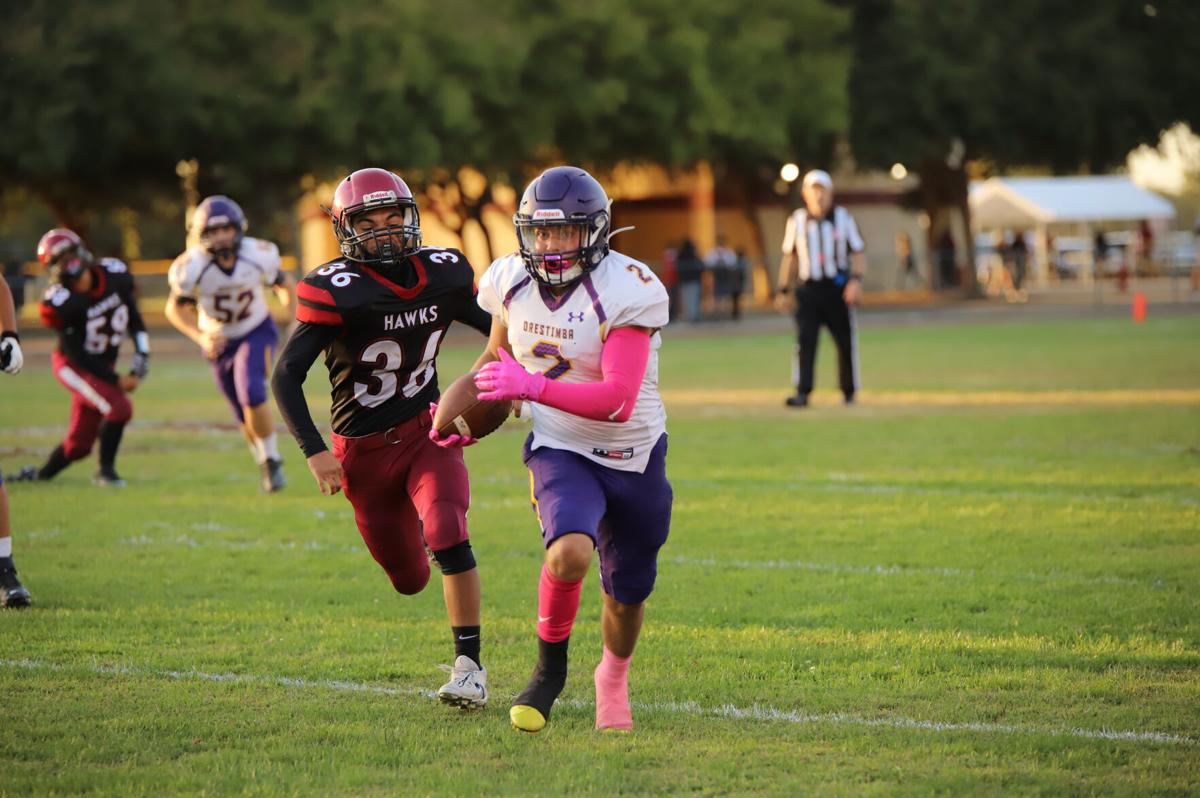 Juan Esquivez one of the Warriors top rushers of the evening finds running room. 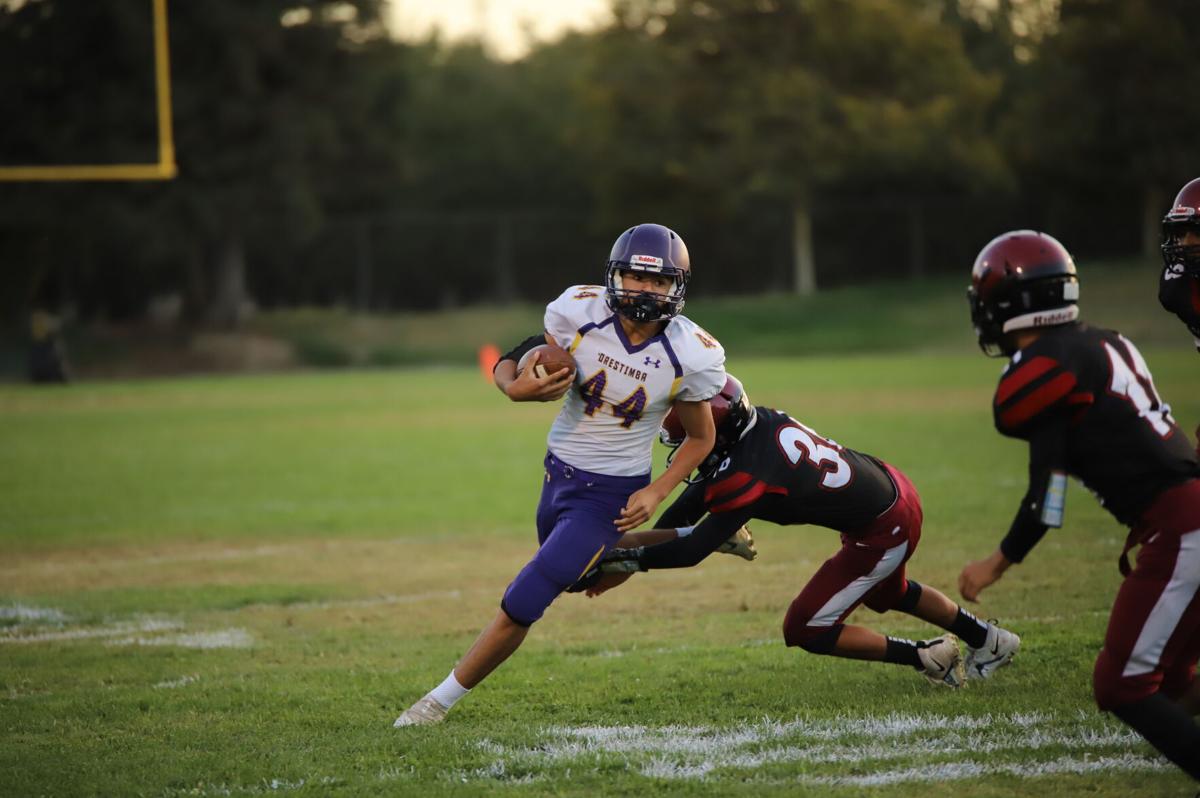 Warrior running back Nicolas Cuevas beats a Hawks defender in a foot races and prepares to make a move on another. 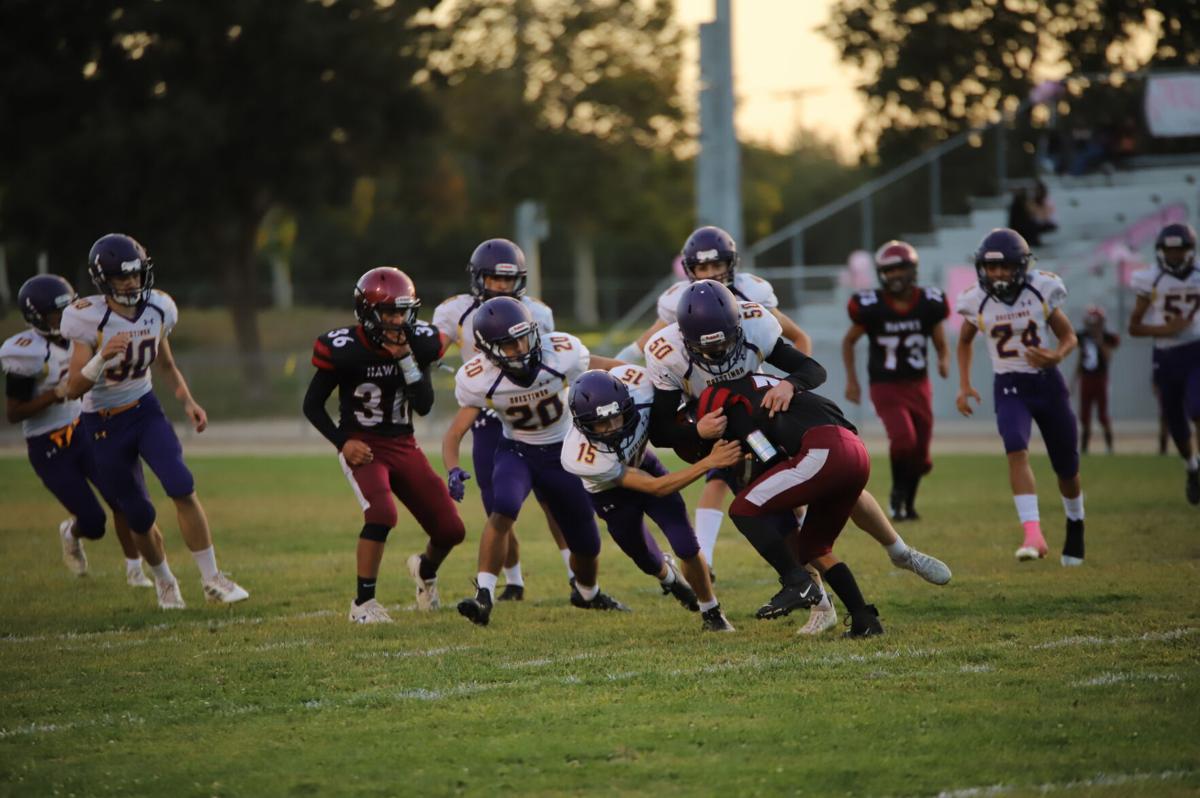 Juan Esquivez one of the Warriors top rushers of the evening finds running room.

Warrior running back Nicolas Cuevas beats a Hawks defender in a foot races and prepares to make a move on another.

Entering into the week seven match up between the JV Warriors and the host Delhi Hawks, it was very much a one-sided game the entire evening with Orestimba racking up more than 369 total offensive yards, which led them to a phenomenal 47-0 victory Friday evening.

Just in the first half the Warriors were able to put up a major lead having five touchdowns total, bringing them into the halftime with a score of 33-0, a big enough cushion to secure their victory.

The JV Warriors now are on a five game winning streak and have improved their league record to 4-0 and 6-1 overall.

To start off the game Delhi (2-2 overall; 1-2 SAL), who received the ball first, ran into trouble right away, when Jericko Silva was able to cause a fumble that was able to be recovered by Ariel Medina, which started the Warriors success.

Quarterback Jacob Valenzuela (6 completions on 7 attempts, 81 yards, 3 TD) was able to connect on two passing touchdowns midway through the first quarter. He first hit Juan Esquivez (177 total offensive yards, 2 TD) on a 17-yard passing play, while later on the Warriors next offensive possession Mateo Navarro took a hand off putting Orestimba on the five yard line. Two plays later Valenzuela was able to connect with receiver Drew Felber to put Orestimba in a 13-0 lead.

Success on offense also lead to success on defense when on a kickoff, Derek Rosas was able to strip the ball from the Hawk’s kick returner causing a fumble to be recovered on Delhi’s 12-yard line. Moments later, Navarro took a hand off, which led him into the endzone and extended the Warriors lead to 21-0 ending the first quarter.

More success was granted to the Warriors when midway through the second quarter Esquivez received a hand off and went 70 yards straight down the field with excellent blocks putting OHS on the Hawks’ own 15-yard line. On the next set of downs Valenzuela was able to hit Jacob Mar in stride for the 10-yard passing touchdown. The extra point was missed, bringing the Warriors to a 27-0 lead with just under eight minutes left in the first half.

With another Delhi punt brought another Orestimba scoring attempt when Esquivez was able to bring the punt back 45 yards putting the Warriors in great field position. A few possessions later Mar took the three yard hand off into the endzone taking the West Siders into the half with a score of 33-0.

Coming back from break the Warriors were able to score two more times once in the third and once in the fourth. Their first score come from the works of Juan Esquivez where he had two huge run plays totaling over 50 yards putting the Warriors at the five yard line. On the next set of downs he finished it off by scoring and increased the lead to 40-0, ending the third quarter.

At the midway point in the fourth, Orestimba was able to force a punt from the Hawks. After getting the ball back a balanced run attack by Allen Garcia and Nicolas Cuevas put OHS on Delhi’s own nine yard line. Moments later Cuevas received the hand off, punching it into the endzone, followed by a successful extra point and bringing the game to an end with the Warriors taking home a 47-0 road game victory.

“Offensively, we had another big night and totaled 369 yards of total offense while putting up 47 points on the board. Our offensive line did a good job with both the run and pass game,” said head coach Mario Martins. “Defensively, we played another solid night, causing turnovers and giving our offense a short field to work with for most of the night. Our special teams have also been doing a good job on the return game and causing turnovers on the kicking game.”

The JV Warriors will be on the road again traveling to Waterford to face off against the 5-2 overall and 3-1 in league Wildcats. Game time begins at 5 p.m.

“This week we face the Waterford Wildcats who are doing good right now. It should be a good game and we have to be prepared for the skill they have offensively.”