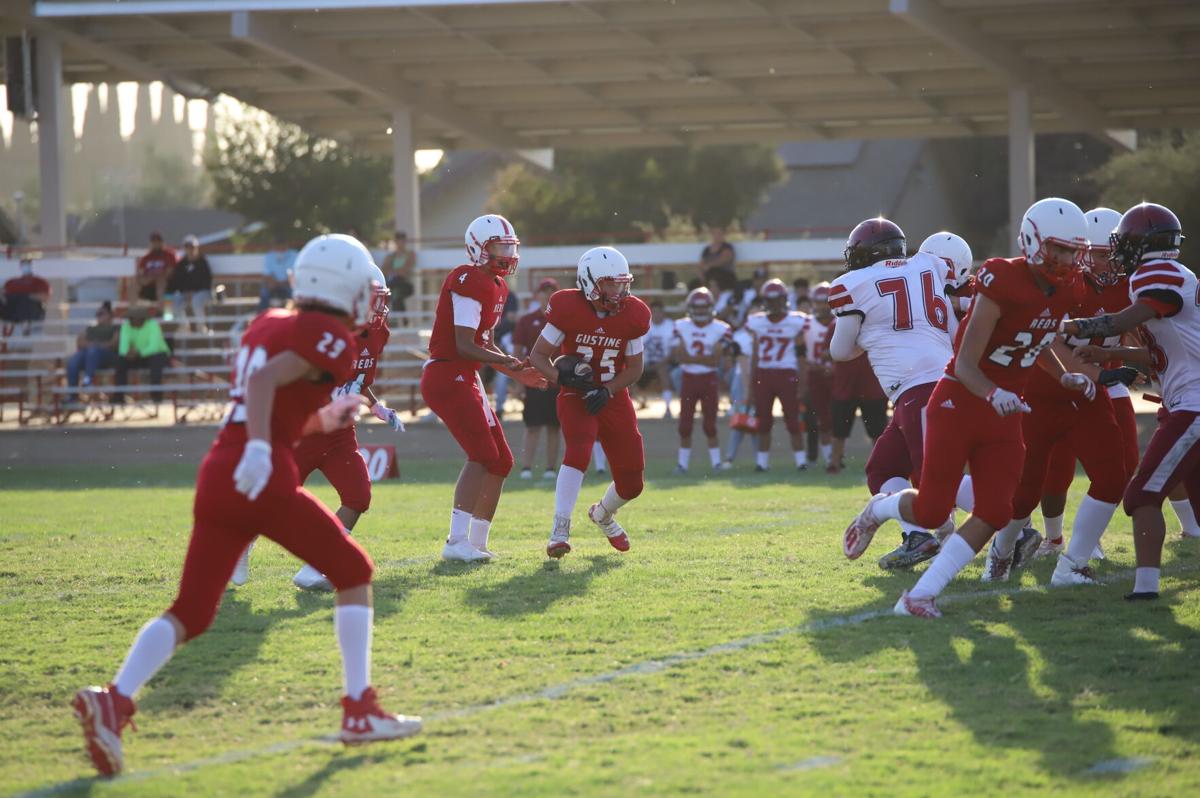 Freshman running back Austin Etheridge receives the hand off from Alejandro Lugo and looks to find the open hole. 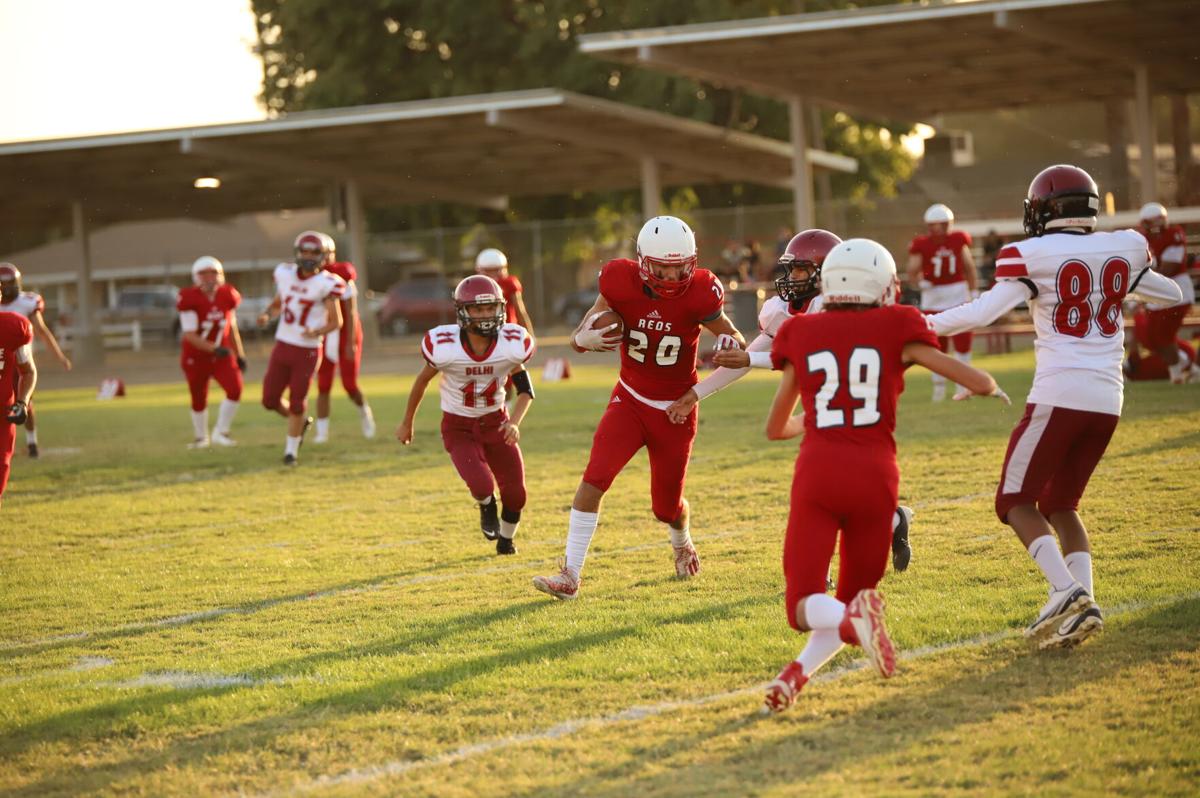 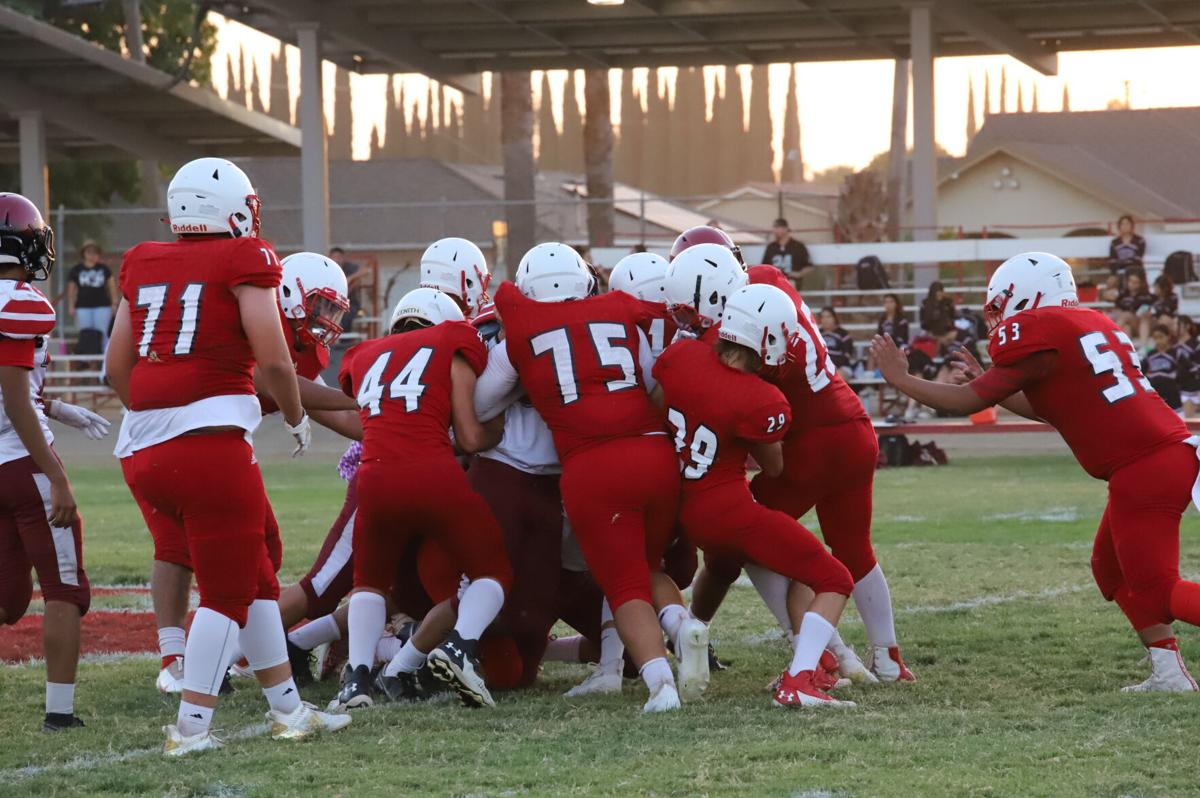 A swarm of Reds tackle a Delhi Hawk ball carrier.

Freshman running back Austin Etheridge receives the hand off from Alejandro Lugo and looks to find the open hole.

A swarm of Reds tackle a Delhi Hawk ball carrier.

In Last Friday’s match up between the JV Gustine Reds and Delhi Hawks, the Reds blew a 14-6 halftime lead where in the second half they had many penalties that let the Hawks come out with the 18-14 win.

This was the Reds (2-2 overall, SAL 1-1) first game of the season due to the team having a COVID-19 team outbreak in the beginning of the season back in August, and also having a snow ball effect the following four weeks against the Delta Charter, Mariposa Grizziles, Denair Coyotes, and Vacaville Christian Falcons where they had COVID outbreaks or no JV squad, which prevented the Reds from playing a game until week six.

“It was great to be back out there despite our loss. Having no film on this team and no games prior I’m happy these kids finally got a game in this season,” said head JV coach Ronnie LaBry. “Because I know they’ve been working everyday during practice and just hoping for an opponent to play.”

The Reds were off onto the right foot by scoring twice in the first half. In the first quarter the Reds gained great momentum and put themselves in good field position in the redzone, which allowed them punch it into the endzone on a 2 -ard quarterback keeper from junior Alejandro Lugo. Bringing their lead to 7-0.

On the Hawks offensive possession they came back with a score of their own, cutting  the Reds 7-6 lead down to one point due to a missed extra point attempt ending the first. The West Siders came back with a rhythm and scored their final points of the game on a one-yard rushing touchdown from junior running back Joshua Garcia extending their lead to 14-6 taking them into the break.

“We were on a roll in the first half, but this is football and penalties just got the best of us and Delhi had a lot of momentum coming into the second and that’s what drove us back,” said LaBry.

Penalties would plague the Reds in the second half, while the Hawks would score two more touchdowns with both extra point attempts missed, ending the game in a 18-14 heartbreak for Gustine in their homecoming game.

“With this being the first game back there was some first game jitters as always but weird saying that in week six,” LaBry Said.

Coming up this Friday the Reds will face off against the visiting Waterford Wildcats (4-2 overall, SAL 2-1) which LaBry says will be a very good match up with their very mobile and explosive quarterback. Game time will start at 5 p.m.

“Coming into this game we’ve got to stay disciplined, eliminate the penalties, and shut down their quarterback because if we do that we will be on the right track,” said LaBry. “While also doing that we need to focus on us and doing what we can to control that game and execute every time we have the ball.”