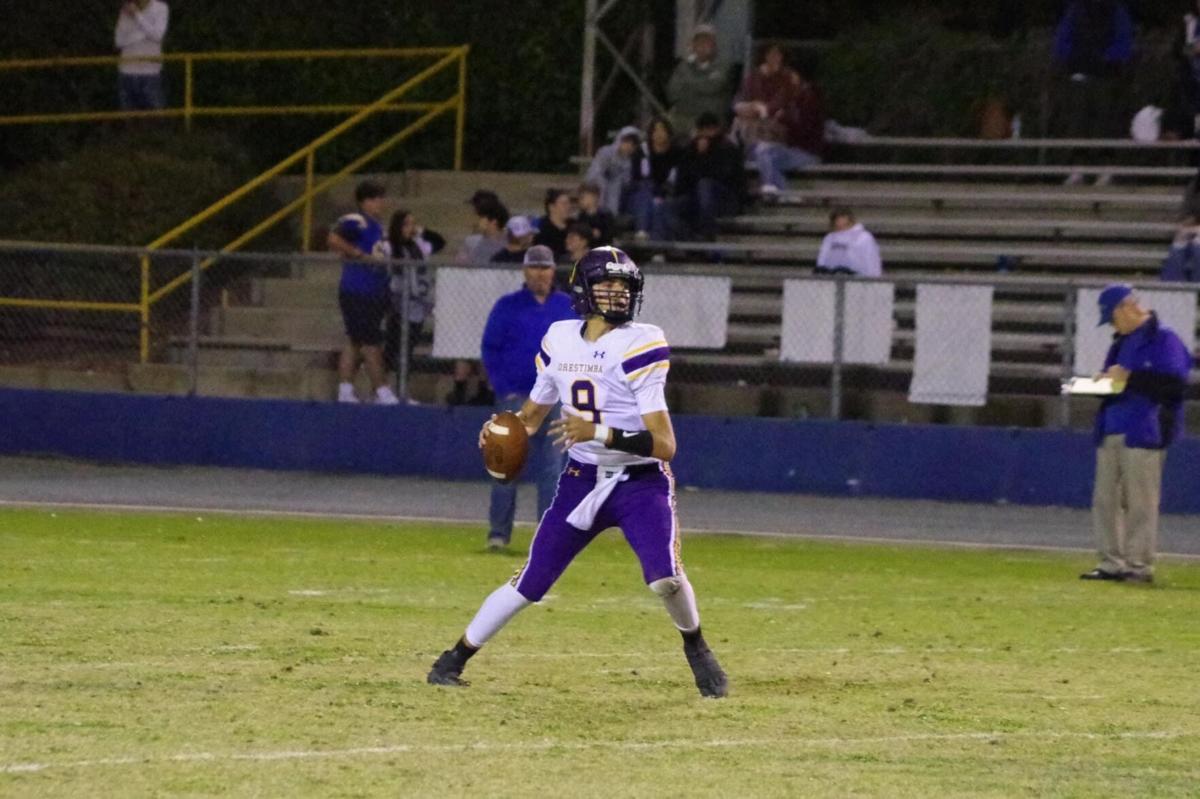 Quarterback Alex Millan looks down field for an open receiver. 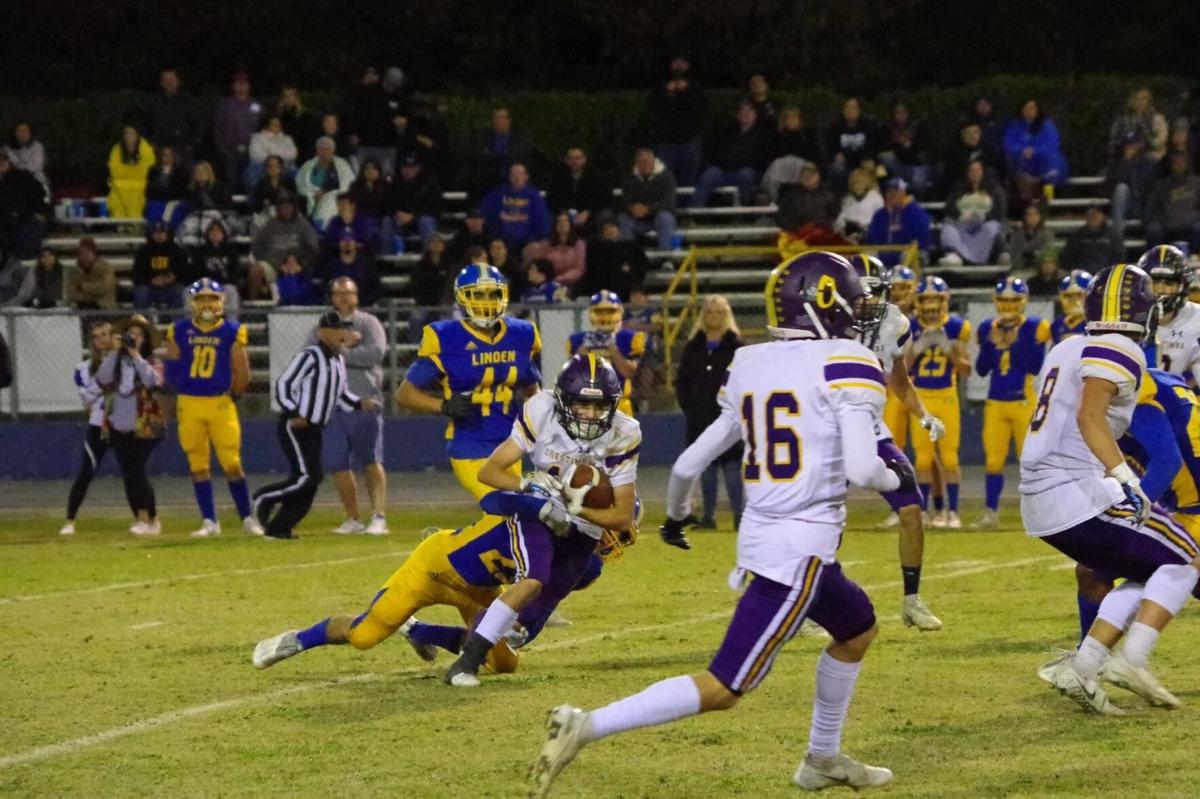 Senior receiver Jayden Vargas drags a Linden defender along as he picks up a few yards. 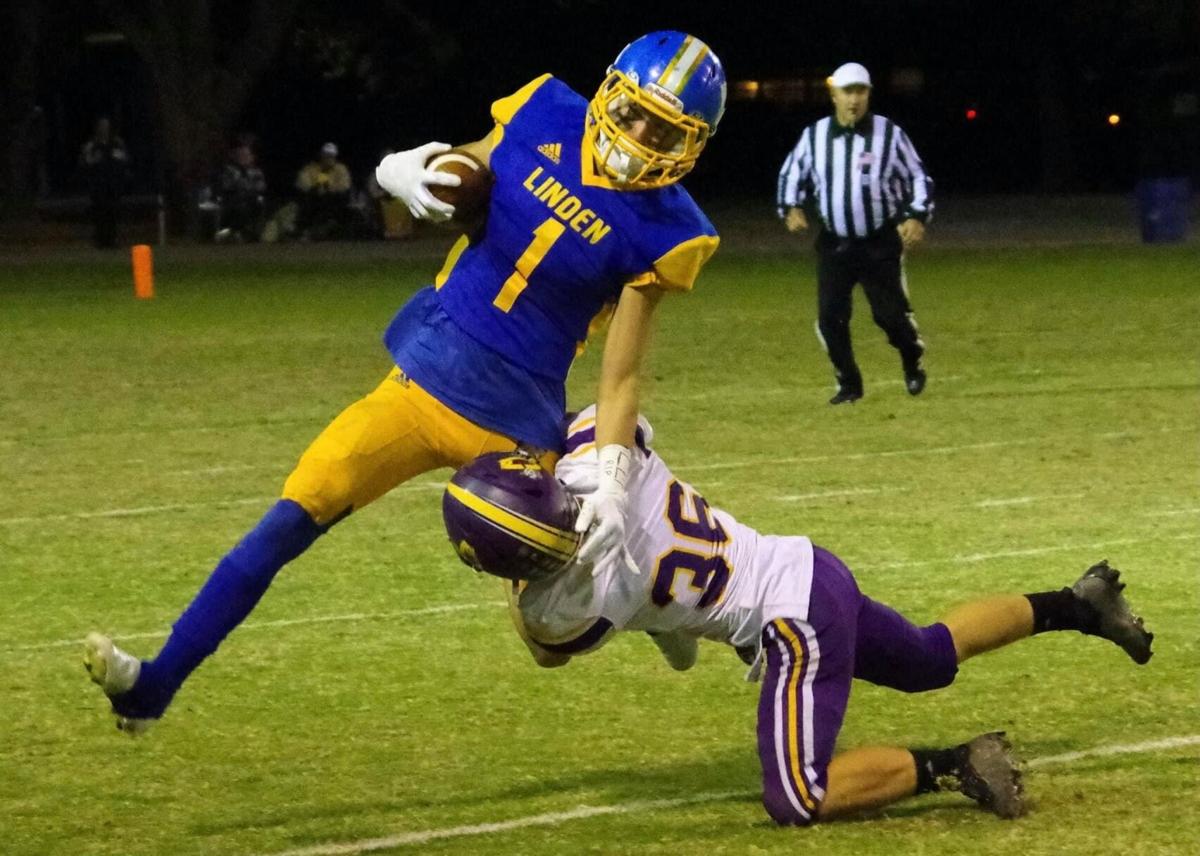 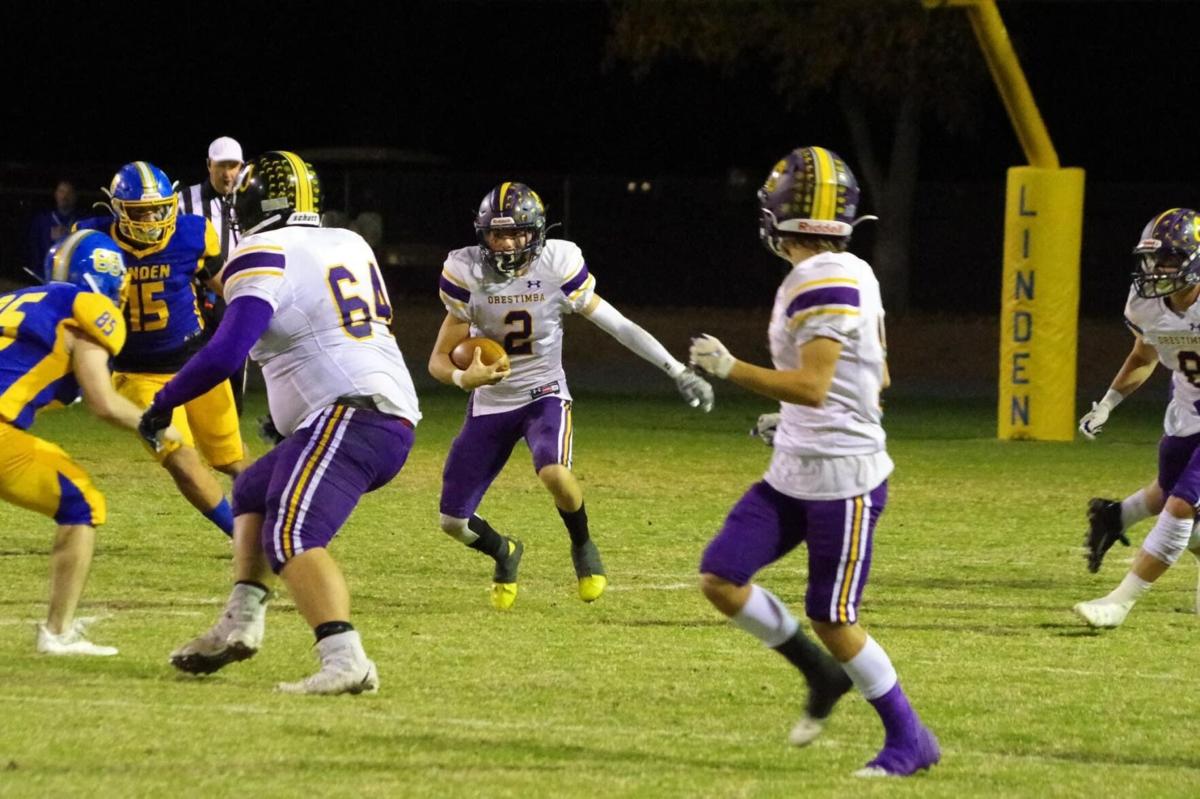 Quarterback Vincent Lopez looks for a running lane during the Warriors playoff match up against Linden.

Quarterback Alex Millan looks down field for an open receiver.

Senior receiver Jayden Vargas drags a Linden defender along as he picks up a few yards.

Quarterback Vincent Lopez looks for a running lane during the Warriors playoff match up against Linden.

The Warriors entered into week 11 with a playoff berth that saw them facing off against the number eight seed host Linden Lions (7-4 overall; 2-0 SDL). Despite a valiant effort, the Warriors took a hard loss, 42-28, and were knocked out of the playoffs.

The last time Orestimba  had a playoff berth was in the 2018-2019 season when they faced off against the Los Banos Tigers but came away with a close 38-31 loss, closing their chance of advancing to the next round.

It was a battle from start to finish with these two teams. Orestimba trailed by just two scores at the half. But a 63-yard interception for a touchdown and a fumble recovery for a touchdown by the Lions sealed the deal for Linden to advance to the quarterfinals and ended the Warriors season.

“We had six turnovers through out this game and they were huge. That played a factor in the end result,” said head coach Aaron Souza. “Take away the pick six and the fumble recovery for a touchdown and it’s a tie game, but overall you can’t win games with too many turnovers.”

The Warriors concluded their season with a 6-5 overall and a 4-3 record in the Southern League.

In the first quarter Linden struck first on a three yard rushing touchdown, giving them an early 7-0 lead. But on Orestimba’s next offensive possession quarterback Vincent Lopez (7 completions on 14 attempts for 89 yards, 1 TD and 5 carries for 29 yards, 2 TD) connected with senior receiver Jayden Vargas on a huge 42-yard passing reception for a Warriors touchdown evening the score at 7-7.

The beginning of the Warriors mishaps would begin on their next offensive possession when a Lions defender stepped in front of a Warriors pass, intercepting the ball and tacking it back 63 yards for a defensive score and putting the Lions up 14-7 at the end of the first quarter.

Coming into the second the Linden Lions would out score the Warriors three touchdowns to two, with all their scores coming from passing plays all over 15 yards a piece. For the Warriors, their two scores would come from Lopez, first on a 14-yard quarterback keeper and the second from a one yard rushing touchdown. Orestimba would go into the break trailing the Lions 35-21.

Coming back from the break the two teams would have a scoreless third quarter with the two teams’ defenses keeping the other out of the endzone.

In the fourth quarter the Warriors would light up the score board first when quarterback Alex Millan hit Lazs King (26 carries for 161 yards) on a seven yard passing touchdown, putting Orestimba just within a scoring play to tie the game.

The Lions would then come up big for a second time on their defensive side, when a King fumble was scooped up and ran in for a touchdown, shutting down the Warriors chances for a come back and sending them home with a 42-28 loss.

“This game wasn’t like us at all to not be protecting the football. We had six huge turnovers with three interceptions and three fumbles that were crucial ,” said Souza. “We also had chances to score and came out scoreless,”

Alex Millan (9 completions on 15 attempts for 122, 1 TD), Jayden Vargas (6 receptions for 130 yards, 1 TD), and Julian Perez (2 receptions for 40 yards) were the other Warriors who contributed to Orestimba’s big night of 421 offensive yards.

On defense, Kai Brazil led the squad with eight total tackles. Drake Perez had his hand at four, while Nathan Richards, Vargas, Angel Navarro, Julian Perez, Chance Ashley, and Gerardo Torres each chipped in two tackles on the night.

“Besides the big plays and turnovers this team performed very well against Linden, especially after coming off a week of a huge celebration of beating Gustine and bringing home the Chief. They were able to tune that out fast and get back to work,” said Souza. “Overall it was a great season. We had goals and achieved them this year, so now it’s time to rest and then soon get back after it for the next season.”