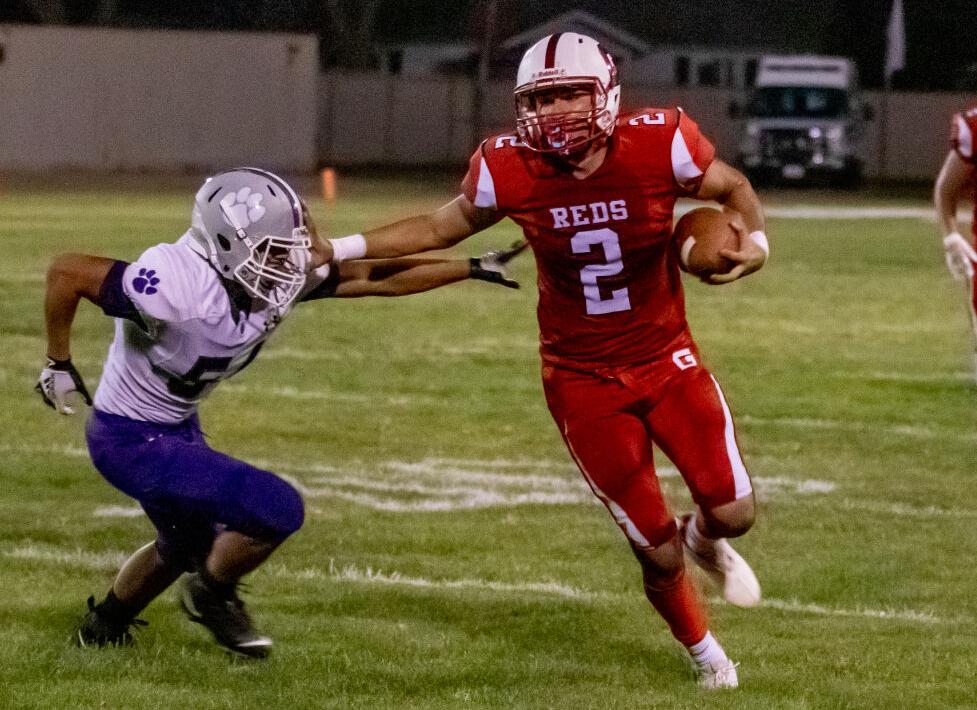 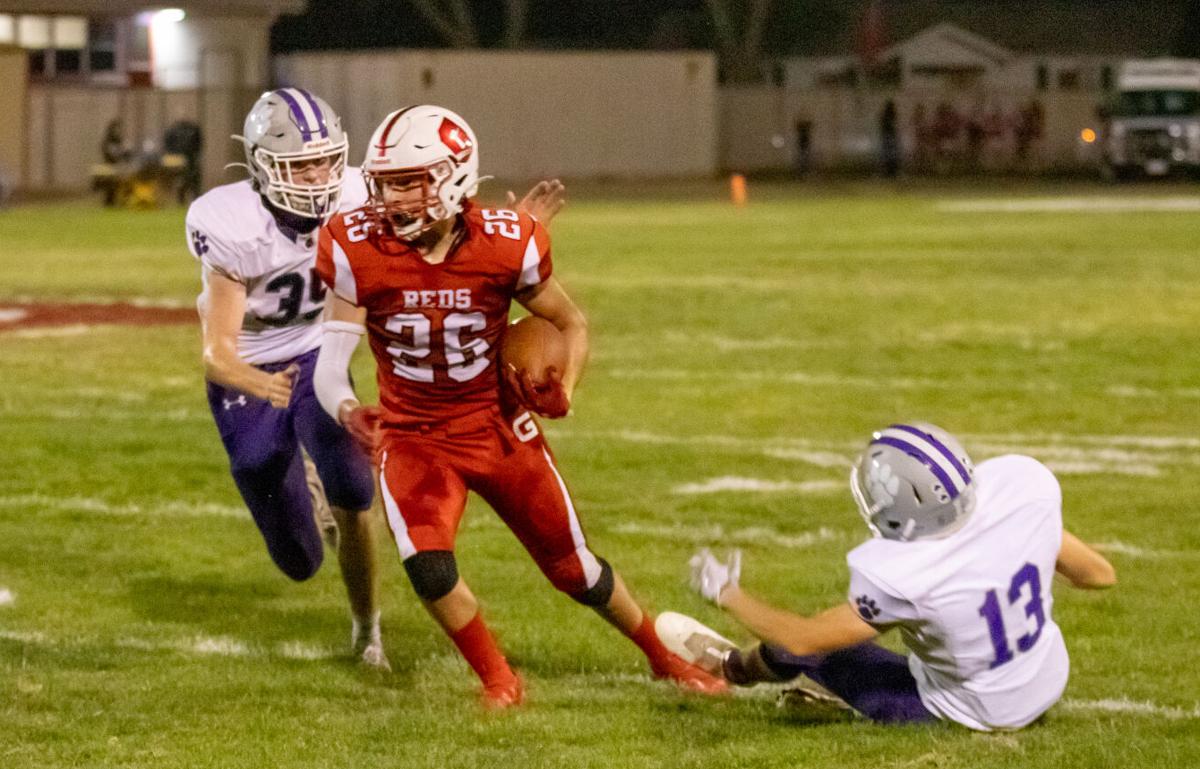 The Reds’ Danny Hernandez jukes one Denair defender and looks to out run another during Gustine’s 23-6 victory.

The Reds’ Danny Hernandez jukes one Denair defender and looks to out run another during Gustine’s 23-6 victory.

The Reds took their first victory of the season against the visiting Denair Coyotes (0-3 overall; SAL 0-1). This was also head coach Paul Nicito’s first win after being named the head coach this year after replacing former varsity coach Ronnie LaBry.

“First win felt great especially in front of our home crowd,” Nicoto said. “This was something these boys definitely needed as a confidence booster to take into the next game.”

With both teams just scoring in the first half, the Reds and leader of the night Gio Quezada, who helped with two rushing touchdowns of his own and also a passing touchdown to receiver Danny Hernandez, is what helped lead the Reds to a 23-6 victory over the Coyotes last Friday night.

The Reds (1-3 overall; SAL 1-1) came ready to play and with tons of momentum after taking a loss last week to the Mariposa Grizzlies, which kicked off their Southern League play.

From the start of the kickoff the Reds brought the ball out into great field position and worked the Coyotes in their offensive schemes to drive it in the Denair territory. On the next set of downs Quezada turned a quarterback scramble into the Reds first rushing touchdown of the night to put them up 7-0 at the end of the first quarter.

Coming back into the second quarter with just a minute in, the Coyote’s answered back with a rushing touchdown of their own, but missed a crucial extra point attempt to tie the game even at seven.

With the Reds leading 7-6 both defensive units took part in causing turnovers. But with three minutes left in the second quarter the Reds took advantage of another scoring opportunity, when Quezada once again took matters into his own hands to reach the endzone on a quarterback keeper to extend the Gustine lead. They were successful on a two-point conversion making it 15-6.

The Reds weren’t ready to stop scoring yet. With just under a minute left in the second quarter senior quarterback Quezada hit Danny Hernandez in stride for the passing touchdown. The Reds second attempt at a two-point conversion was successful to take it into the half with a 23-6 lead.

This ended the scoring for both teams that night.

“I emphasized to my team during practice and in pregame that we needed to come out scoring early and we did just that. Denair is a run heavy team and since our defense was able to stop them on the ground I believe that’s what helped us pull this victory,” said Nicito. “Along with that I want to praise our offensive line because they have been struggling this season and this game I saw tons of improvement and their grind in practice is amazing.”

The Reds now enter into week five which will be their homecoming, going against the visiting Delhi Hawks (2-2 overall; SAL 0-2) who are a very physical team and who bring a lot to the offensive table. Game time for the varsity Reds begins at 7:15 p.m.

“In my opinion this game is going to be a major slug-fest the entire night, due to Delhi being so physical on both offense and defense. This week during practice we just have to do some fine tuning to prepare for these guys and go over film. Especially on offense for us. I know they are going to want to start blitzing from the get go,” said Nicito. “Also with it being homecoming I want my team to enjoy it but also they need to stay focused because with a lot of the celebration they can get distracted from the big game.”