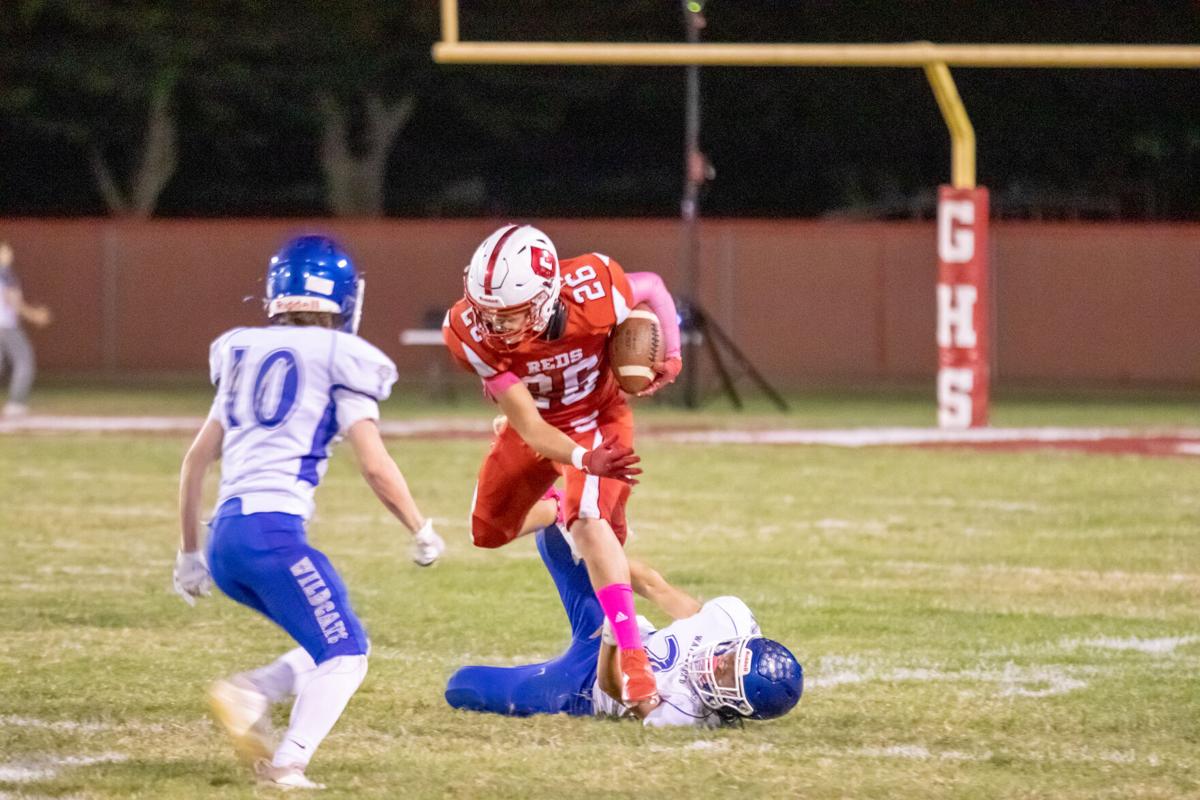 Running back Danny Hernandez run over the Waterford defender to pick up more yards. 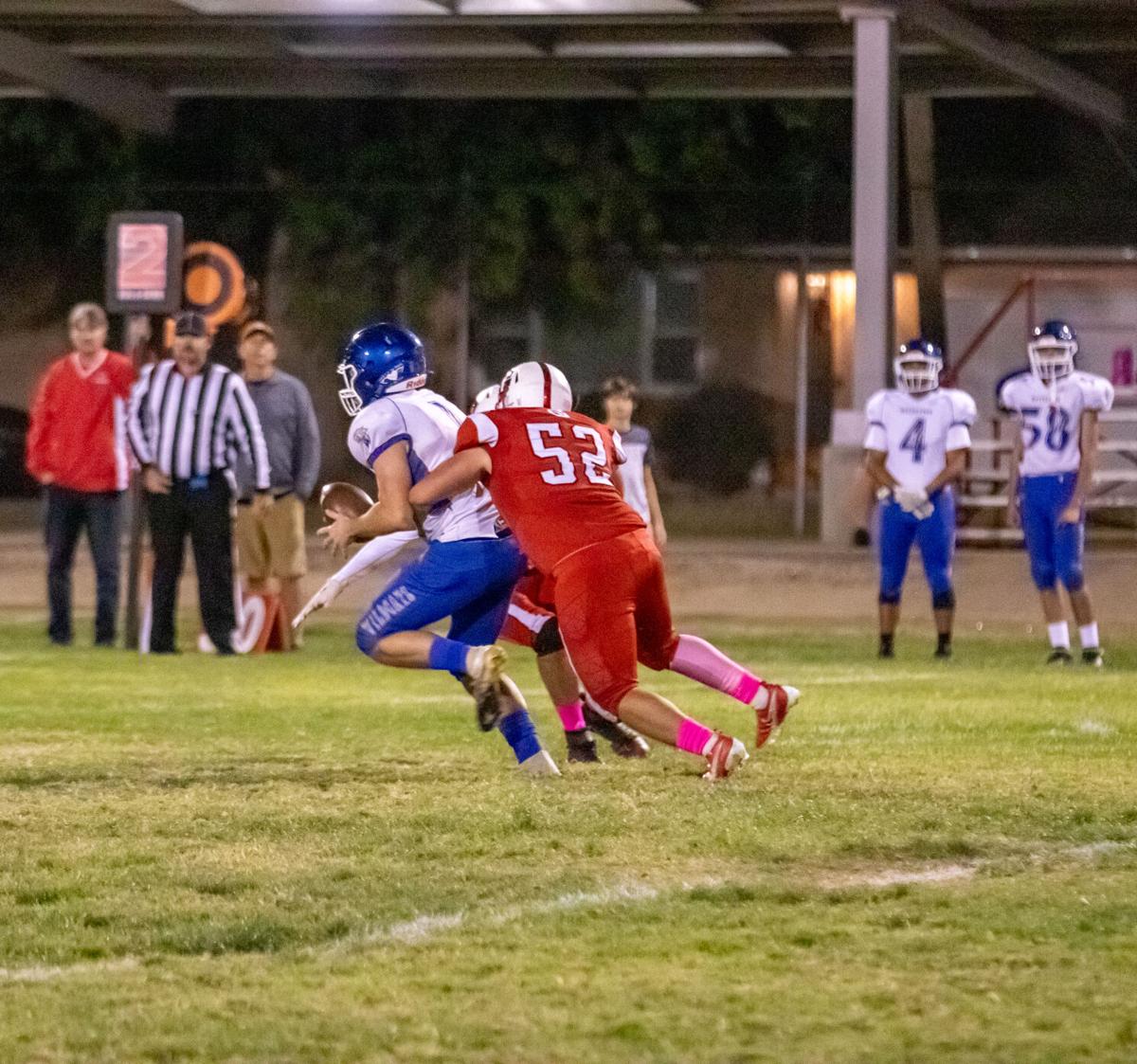 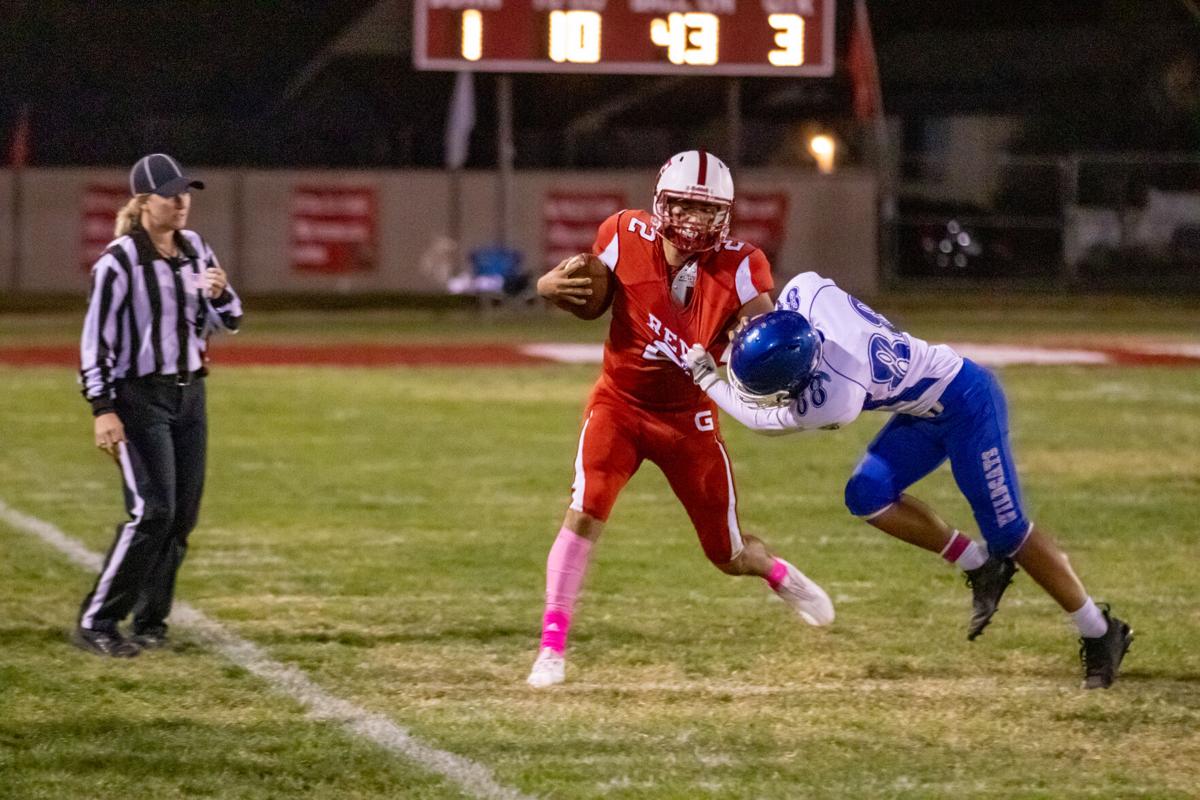 Gustine senior quarterback Gio Quezada tries to get loose from a Waterford defender grip and pick up more yards.

Running back Danny Hernandez run over the Waterford defender to pick up more yards.

Gustine senior quarterback Gio Quezada tries to get loose from a Waterford defender grip and pick up more yards.

After a great 14-10 nail-bitter win last week against the the Delhi Hawks, the Reds took on the Southern Athletic League leaders, the Waterford Wildcats (7-0 overall; 4-0 SAL) who have been dominating their schedule since week one of the season. The Reds came into this match up in hopes to keep their winning streak alive but came away with a 41-10 heartbreak, as the Wildcats’ offense was just too much for the Reds Friday night.

A downhill spiral came for Gustine in the second quarter when they weren’t able to drive the ball into the endzone on their offensive possessions, allowing the Wildcats to capitalize and connect on four touchdowns in the second quarter.  Their momentum was felt throughout the stadium.

“When I look back at this game we hung in there the first half and I’m proud of this team for that,” said head coach Paul Nicito. “The few mistakes we had on offense and also defense hurt us and I feel with minimizing our mistakes, it could have changed our demeanor for the second half.”

The Gustine Reds have now dropped down to 2-4 overall and 2-2 in league play as they now sit in the fifth position in the Southern League.

At the start of the game in the first quarter it was a back and forth exchange between punts and turnover on downs for both teams. But midway through the quarter, running back Zander Leyva was able to pick up a huge gain of yards to put the Reds in great field position to line up for a touchdown. But the stifling Waterford defense was able to hold off a touchdown for the Reds, leaving them resolved to a field goal attempt. Kicker Danny Hernandez was able to put the ball through the uprights to take a 3-0 lead ending the first quarter.

In second quarter, Waterford was able to gain huge momentum by putting the ball into the endzone four times all being passing touchdowns. The Wildcats took advantage and capitalized on each punt the Reds had to take, giving them a huge 27-3 lead entering into the half.

As they came back from the break the Wildcats scored with just two minutes to go in the third, scoring on another passing playing and extended their lead 34-3.

Coming into the fourth the Wildcats once again dominated the Reds defense by putting up another score making it 41-3.

As time began to expire the Reds were able to connect on a rushing touchdown by Gio Quezada but time expired putting Gustine’s hope of a comeback to rest. The Wildcats defeated the Reds 41-10.

“On defense we were over aggressive and that’s not a bad thing but we let up big plays doing that, and I feel like coming into this next game we are going to have to emphasize a lot on the fundamentals and staying disciplined, and the same for offense; focus on the little things and we’ll do just fine,” said Nicito.

Entering into week seven the Reds will face off against the Le Grand Bulldogs (4-3 overall; 3-1 SAL). The last time these two had a match up was last season when the Reds came home with a 27-20 victory on a last second rushing touchdown. This will be a great match up between the two. Game time will begin at 7:15 p.m.

“This match up will be a dog fight between us two, and it may come to a close game like it did last year,” Nicito said. “We can’t get down on ourselves like we did last game if we start to fall behind, because this is football and anything can happen. We just need to come in with a great and better demeanor this game.”