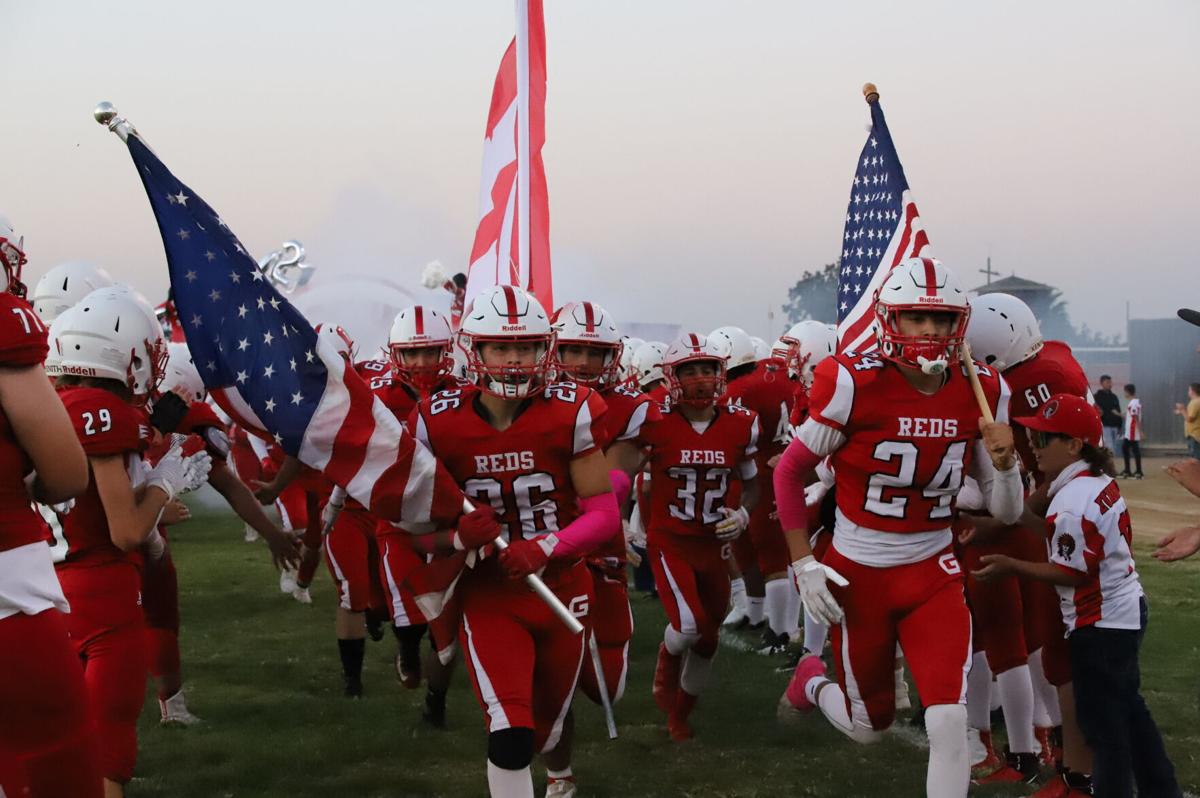 It was Homecoming week for the Gustine Reds last Friday night. The Reds ran out onto the field with our nations colors and school flag. 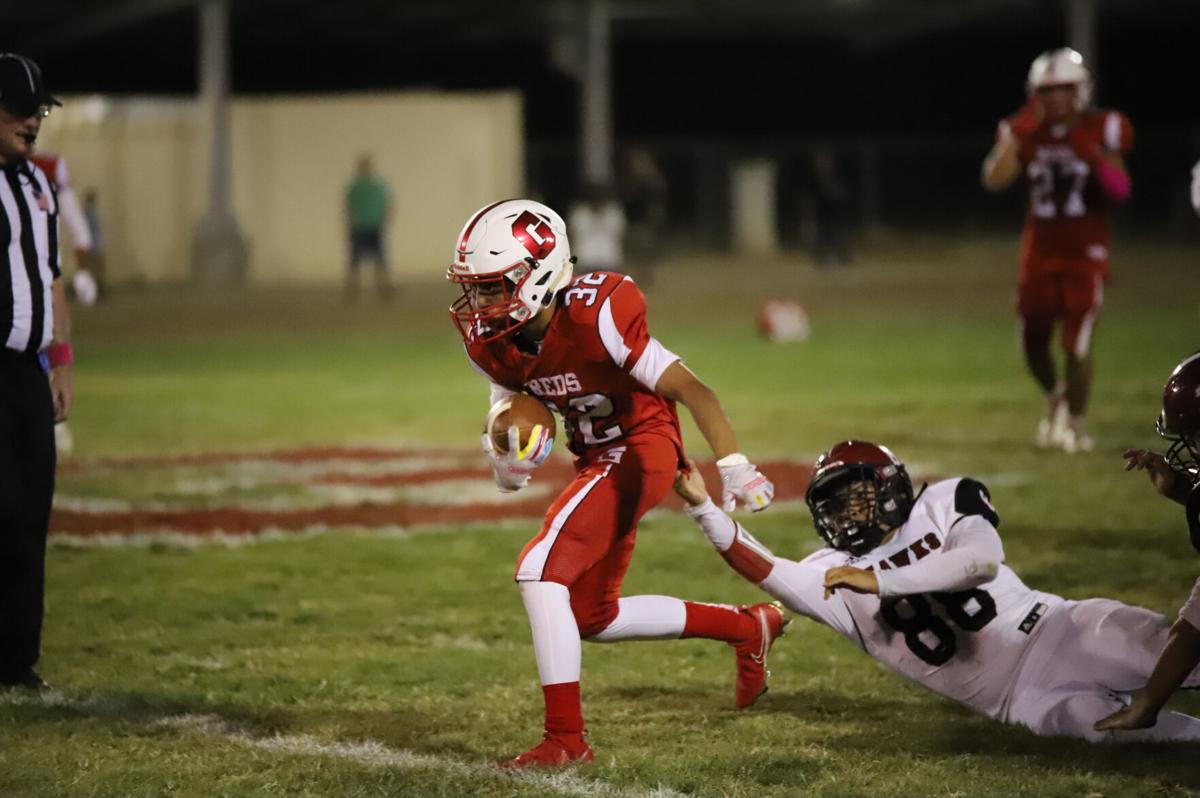 Senior running back Cristopher Meneses looks forward to the endzone as he pulls along a Delhi defender. 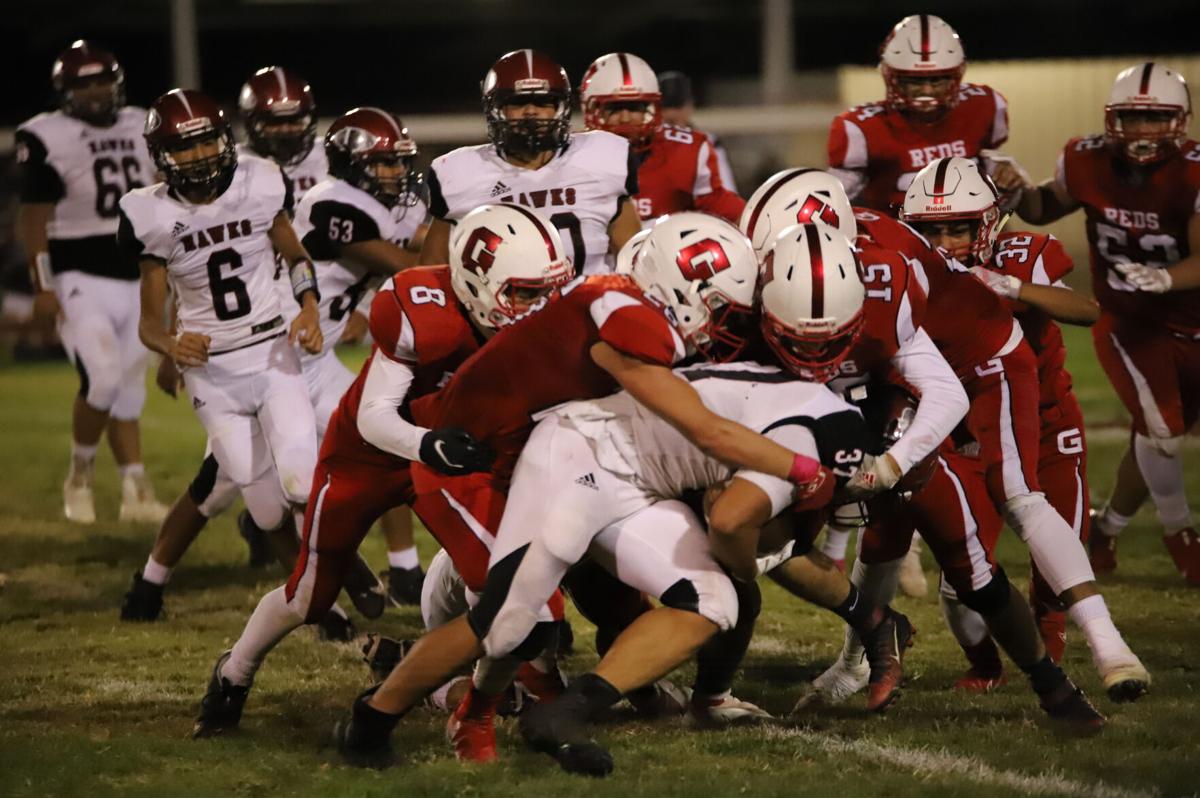 A pack of Gustine Reds make a gang tackle on a Delhi running back.

It was Homecoming week for the Gustine Reds last Friday night. The Reds ran out onto the field with our nations colors and school flag.

Senior running back Cristopher Meneses looks forward to the endzone as he pulls along a Delhi defender.

A pack of Gustine Reds make a gang tackle on a Delhi running back.

The Gustine Reds celebrated homecoming last week and as they prepared for the big game Friday night with homecoming themed dress up day, activities, a parade and crowning the king and queen, the only thing that could make it better was a win.

The team did not disappoint. They claimed victory over the visiting Delhi Hawks, 14-10.

Some minor turnovers set the Reds back during the game but that did not stop the rhythm of the team to take it in the finals seconds and come up with a huge team tackle at the goal line. The move stopped the Delhi ball carrier in his tracks on the Reds own three yard line, and gave them the 14-10 victory.

“Our defense right now is the heart and soul of this team. They’re getting us through games and helping our offense gain confidence,” said head coach Paul Nicito. “They came up big on our last play of the game and like they say, defense wins games.”

The Reds (2-3 overall; SAL 2-1) added another win under their belt and had a balanced game of both rushing and passing touchdowns. Although the Reds didn’t start off on the right foot as they wanted to when on their offensive possession senior quarterback Gio Quezada threw an interception. This was the team’s first turnover of the night, which lead to end the first quarter.

Midway through the second quarter the Reds took the tragedy of losing the ball and created momentum for themselves when Quezada connected with running back Danny Hernandez on a 26-yard passing play to place then in the redzone. On the next set of downs the West Siders were clicking on all cylinders, which allowed running back Zander Leyva to punch it into the endzone on an eight yard run, to take the lead 7-0.

Delhi’s offense came back with a score of their own when they capitalized on a pass interference call against the Reds, which lead to successful field goal attempt cutting the Reds lead down and taking them into the half with a score of 7-3.

“From this team what you see on film is what you get in the action. They are very run heavy, and they love to run the clock, and that’s their philosophy on getting wins,” said Nicito. “But my team responded great.”

More troubles came Gustine’s way in the start of the second half with another interception but the Hawks were unable to score on the advantage.

The Reds, who utilized their ground game very well, handed the ball off to running back Leyva and he was off to the races with a phenomenal 65-yard run to put the team in great field position to end the third.

This set up a 12-yard touchdown passing play from Quezada to junior receiver Gio Torres to extend their lead to 14-3.

But more troubles came to the Reds when the Hawks broke a 98-yard kickoff return for a touchdown to stun the Reds and their home crowd, closing Gustine’s 14-10 lead ever smaller.

With an exchange of blows from both defenses back and forth it came down to Delhi bringing the ball all the way to the Reds own 5-yard line with a new set of downs.

The roar from the crowd and the motivation for a homecoming win had the Reds in the right mindset when the Hawks went for it on 4th and 5 and could not punch it in for the attempt to ruin the Reds homecoming.

The Gustine Reds came out victorious with a final score of 14-10.

“Our offense came to play even though Delhi has a weird way of playing football and bleeding the clock when they have possession. We responded very well to that and it was a team effort on both sides of the ball to get this win.”

Entering into week seven the Reds will face off against the visiting Waterford Wildcats (6-0 overall, SAL 3-0) a team full of athleticism on both sides of the ball. Game time begins at 7:15 p.m.

“Coming into this game I really don’t feel like I have to go out of my way to prepare a defensive scheme for them because our defense will be one they haven’t seen yet and our defense matches up well against them,” said Nicito. “In practice this week I’m really emphasizing them to wrap up during tackles because these guys are shifty and will make you miss and this is how they are on the top right now.”