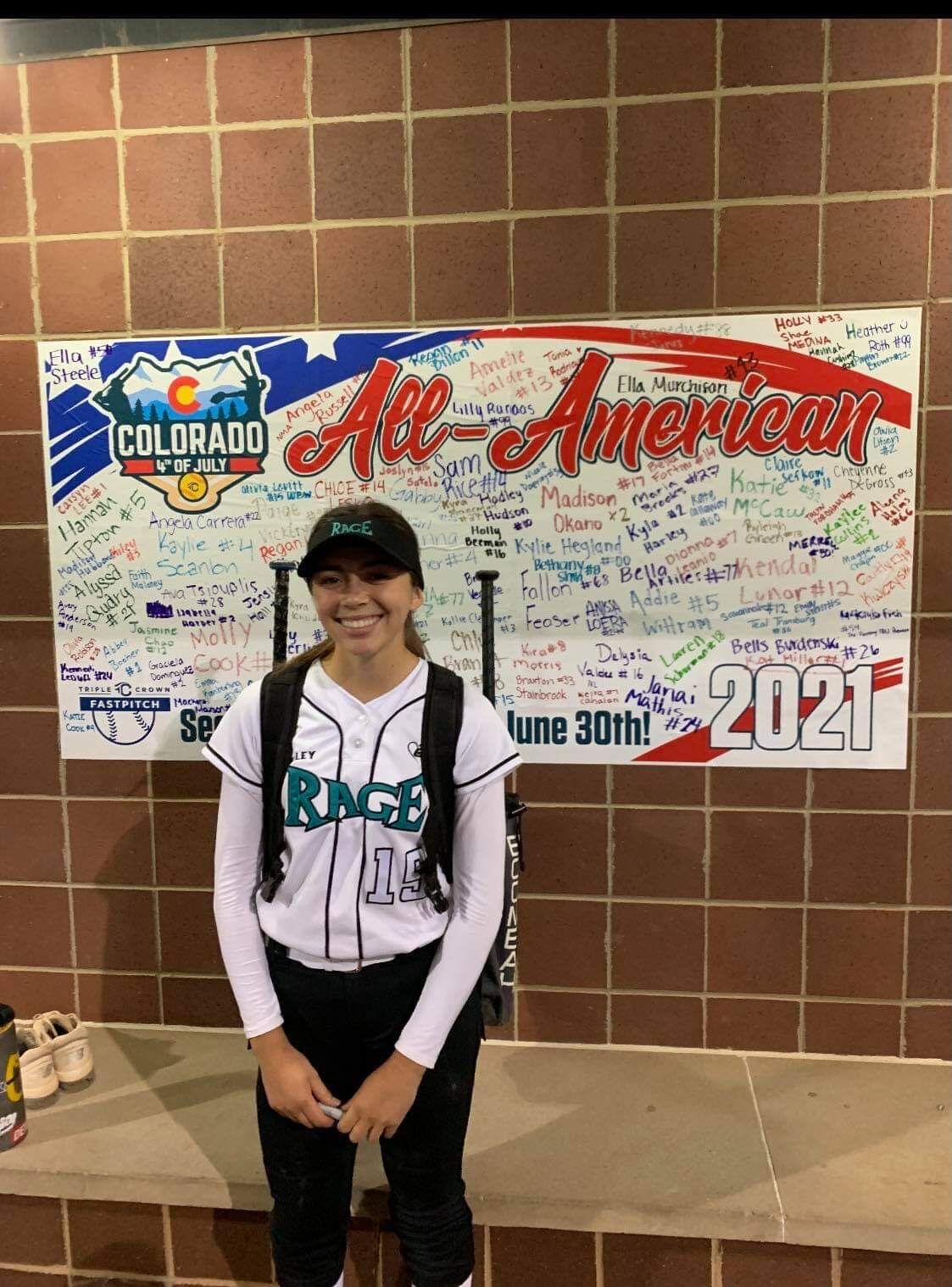 Joslyn Sotelo poses for a photo as she signed the All-American poster after she took part in the game during the Colorado Sparkler Tournament. 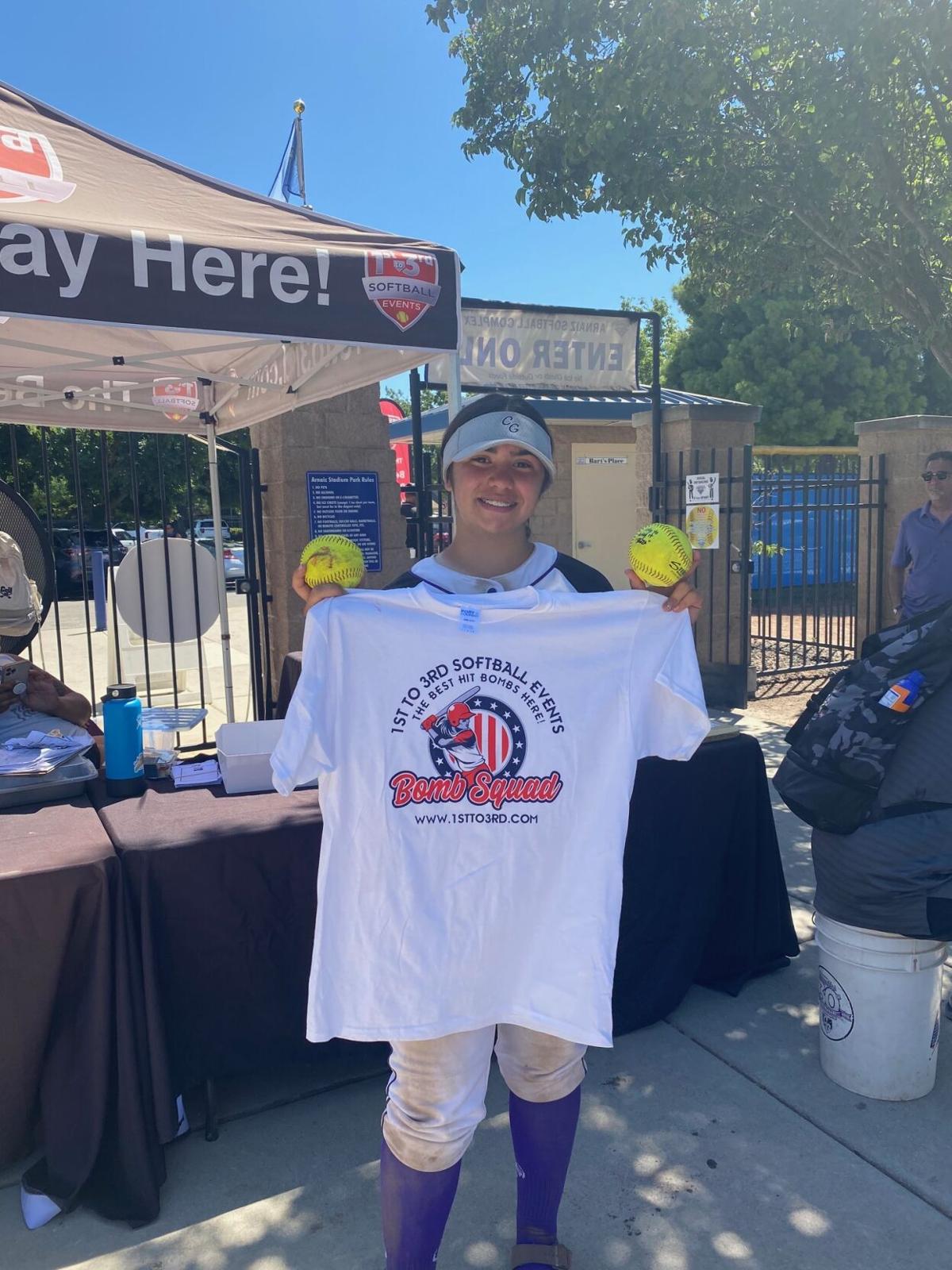 Sophia Machado received a bomb squad T-shirt from the PGF State Champs tournament in Stockton for hitting two homeruns over the fence. 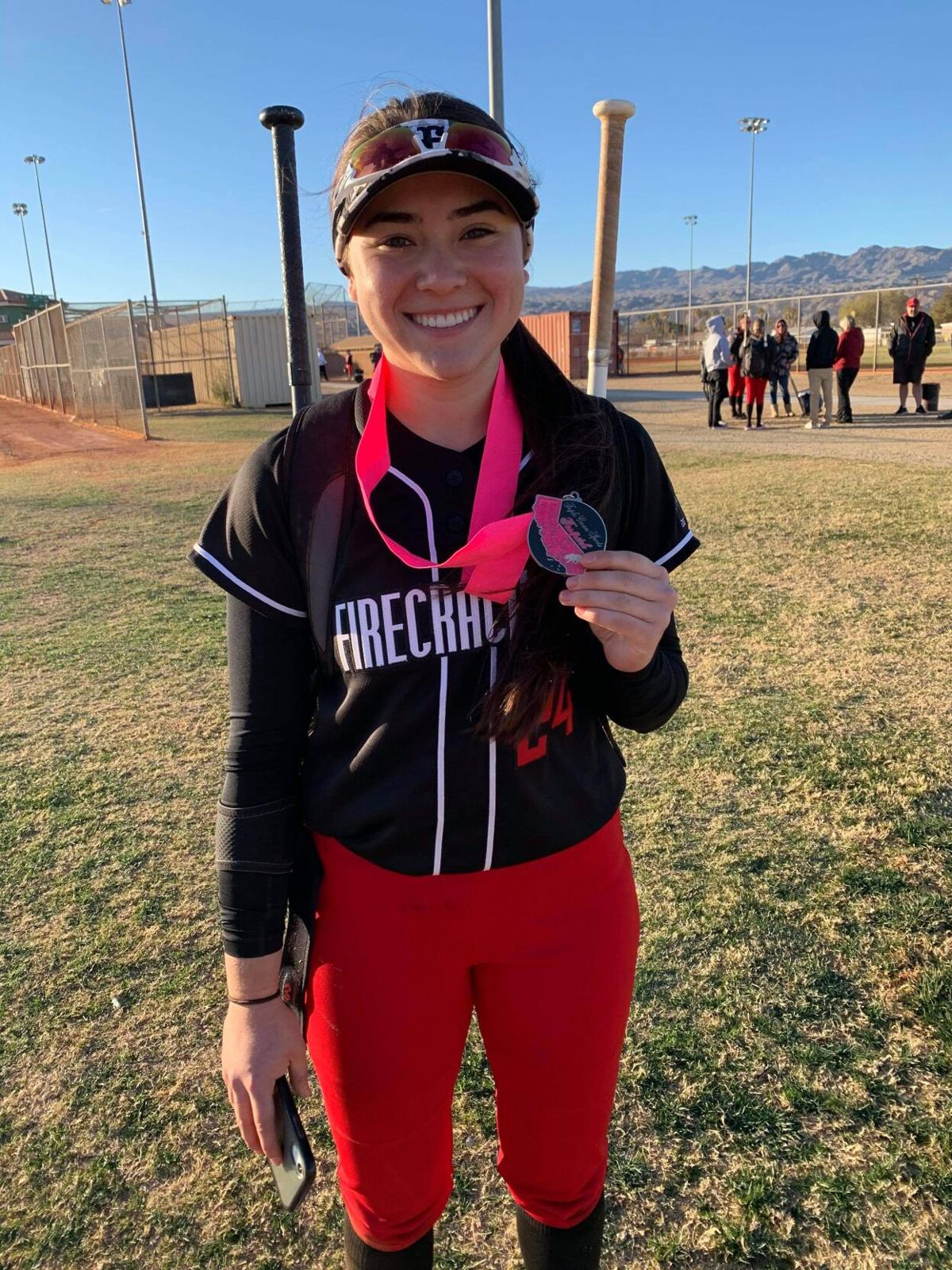 Regan Marroquin shows off her Triple Crown Showcase fast pitch medal from her trip to Tempe, AZ with her 16U NorCal Firecrackers squad

Joslyn Sotelo poses for a photo as she signed the All-American poster after she took part in the game during the Colorado Sparkler Tournament.

Sophia Machado received a bomb squad T-shirt from the PGF State Champs tournament in Stockton for hitting two homeruns over the fence.

Regan Marroquin shows off her Triple Crown Showcase fast pitch medal from her trip to Tempe, AZ with her 16U NorCal Firecrackers squad

Some local West Side softball players have taken advantage of the summer to up their skills and grow in their craft before they enter into regular seasons this upcoming spring for softball. Regan Marroquin, Sophia Machado, and Joslyn Sotelo did just that with travel softball and have been enjoying it every step of the way.

Joslyn Sotelo,16, is the daughter of Jaime and Jenny Sotelo and attends Orestimba High. She has been quite busy this summer with her 16U softball team the Valley Rage out of Atwater. Sotelo has been involved with travel softball since she was 9 years old and has the hopes and dreams of one day playing at the collegiate level. Her summer started off in the Premier Cup 18U in Stockton June 12-13. Then she traveled out to Denver for the Colorado Sparkler from June 27 until July 4 and earned a great amount of awards and stats. She was chosen to play in the All-American Game at the tournament after competing in the All-Academic Showcase game. Sotelo had a batting average of .500 for eight games during the week-long tournament, and she had two home runs, two doubles and eight singles. After her remarkable trip to Colorado she returned to California with her team entering in the Clovis & Salinas Friendly tournaments, and S:54 Superior Showcase in Tracy. She now has time to settle down and focus on training. With her very active summer, and along with the time and commitment she puts in on and off the field, Sotelo has a very bright future in the softball community.

Sophia Machado, 14, is the daughter of Martin and Margery Machado and plays for the 14U California Grapettes-Kappmeyer. Machado has been in the travel softball scene with this team since the age of 10.

During this summer she was honored to play with her team at the Premier Girls Fast-pitch State Champs tournament in Stockton on June 26 through the 27, where they played three games the first day to get a ranking seed number for the next day. Machado and the Grapettes battled through four games that next day, making it all the way to the championship game and winning the tournament. The prizes for the winning teams vary from cash money for the organization, brand new gloves and T-shirt’s and the ultimate bragging rights.

During her time Machado received a T-shirt reward from the 1st to 3rd softball event called, “Bomb Squad”, for homerun bombs over the fence. As her summer continues, Machado is in another tournament in Huntington Beach that started Monday. To play in this tournament a  team needs to win a berth qualifier, and the best of the best play at this tournament.

Softball is a huge part of Machado’s daily life, and she said it contributes many memories bad and good. But during her games it is definitely a learning experience for herself down the road in life.

Regan Marroquin, 17, is the daughter of Joaquin and Michelle Marroquin. She has been very active this summer preparing for her senior year at Orestimba High with many tournaments under her belt this off season.

Marroquin is apart of the 16U NorCal Firecrackers and has traveled to many state this year such as Utah, Arizona, and Colorado.

Starting in October of 2020 Marroquin and the FireCrackers went 4-1 in the Southwest Invitational showcase in Utah, along with the Triple Crown Showcase and Winter Classic taking place in Arizona, where they again went 4-1 and placed second.

She continued to travel and stopped at the Colorado Sparkler and Irvine Tournaments, which consisted of elite teams from across the United States who qualified by winning a bid. At both tournaments the team placed 8 out of 100 teams that qualified.

She also mentioned that many college coaches see the athletes at these tournaments and recruit them based on their talent. With hopes and dreams of reaching the collegiate level, Marroquin has been invited to the Fall Jamboree in Las Vegas, which is a college recruiting camp.

As she continues to work hard and strive for her success in softball, Marroquin will have a few weeks off to recharge and eventually get to showcase her talents once again for  her next season for the Nor Cal FireCrackers that runs from September of this year through July of 2022.