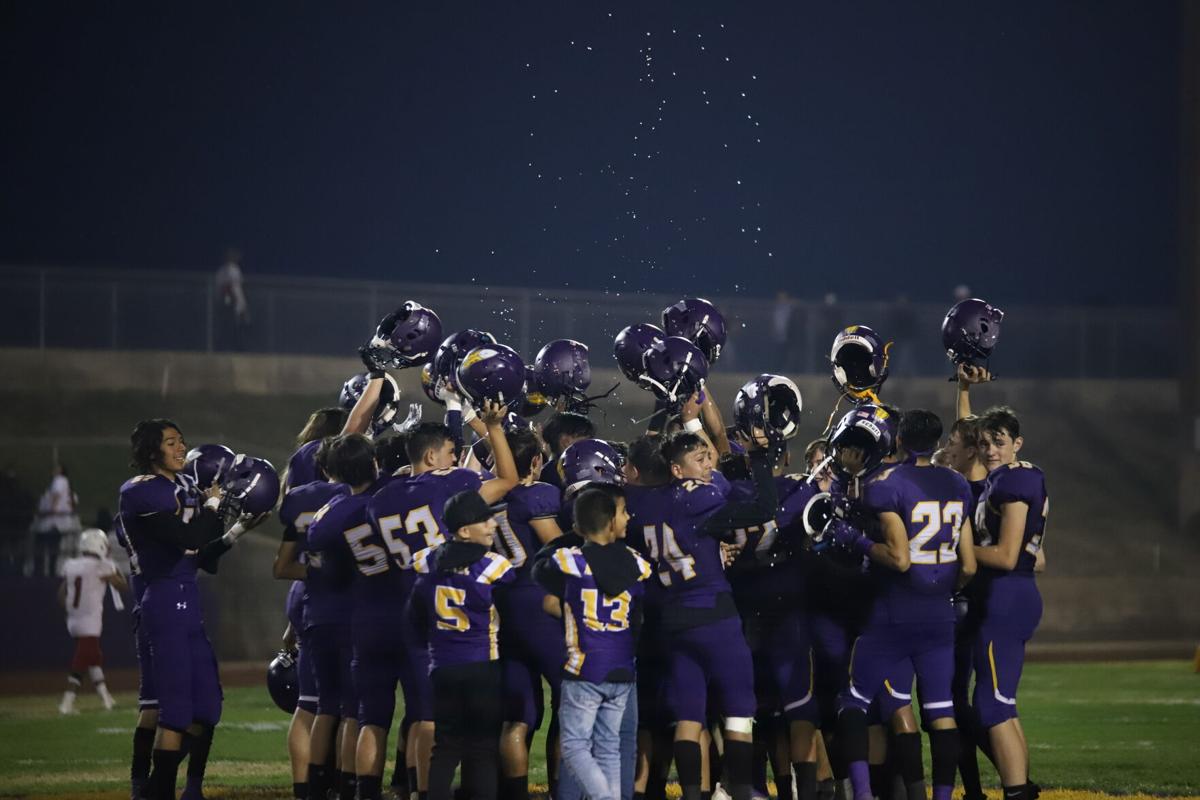 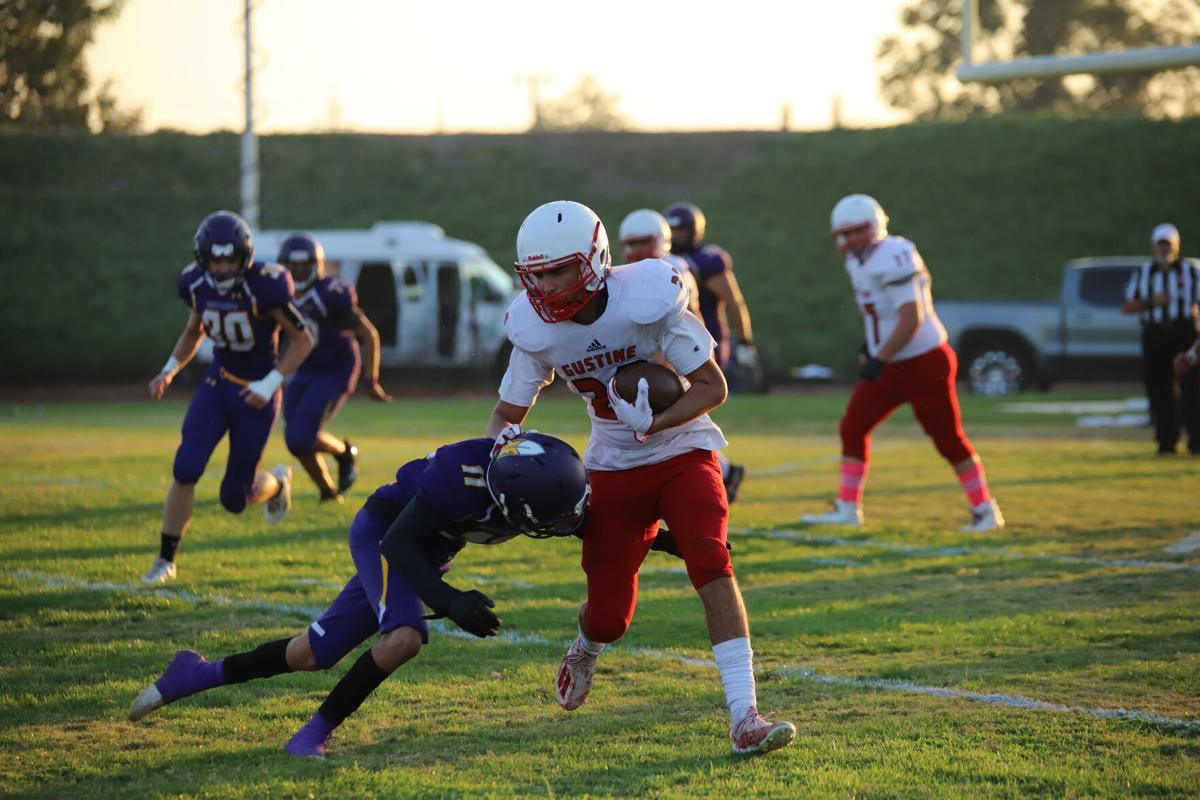 Mateo Navarro (11) from OHS locks in on the text book tackle as Danny Quezada tries to escape with a stiff arm. 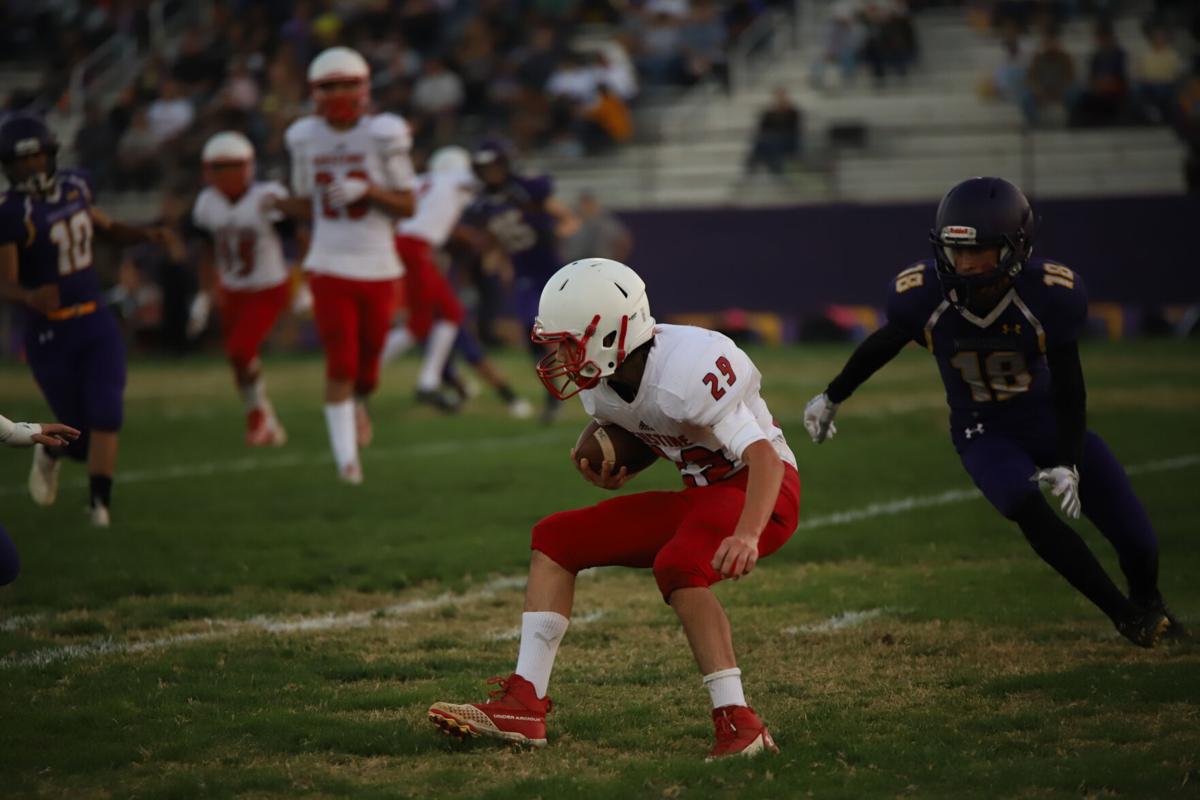 Gustine’s Mike Saaranzin looks for some running room during his kickoff return attempt. 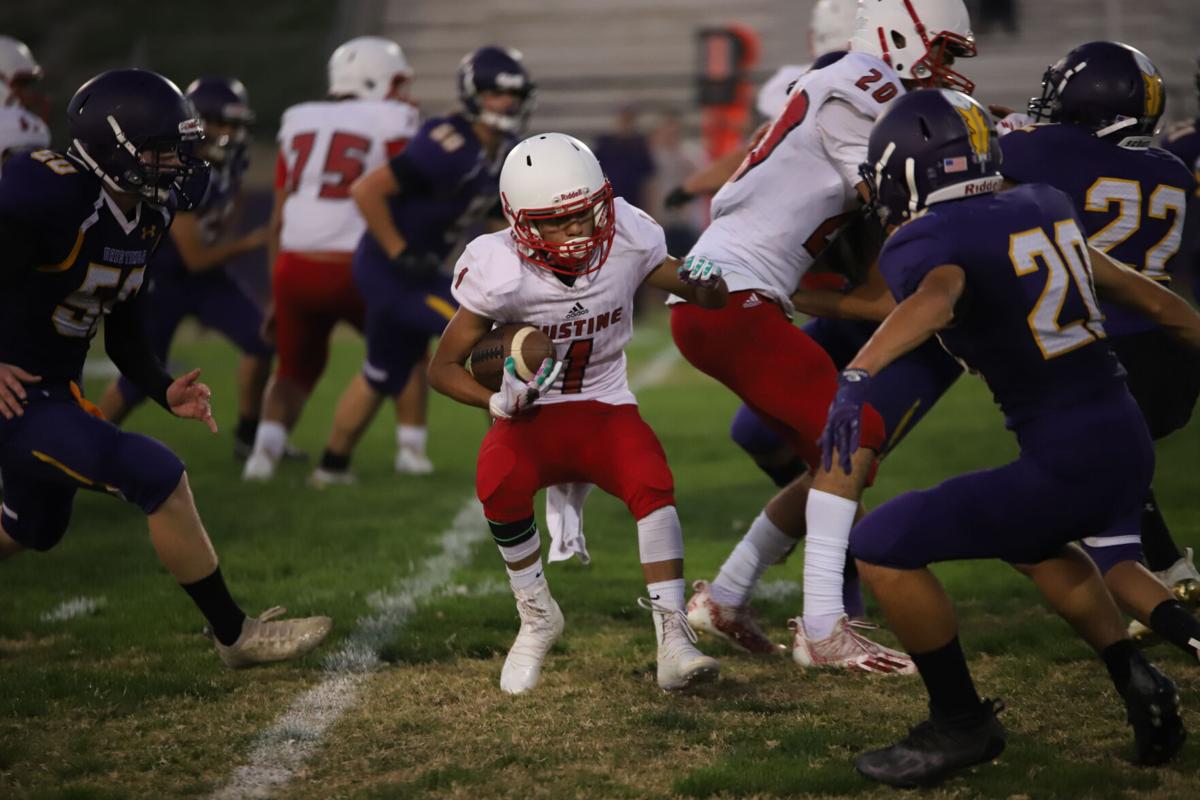 Reds running back Joshua Garcia (1) looks to make a move on Drew Felber (20) to pick up a few more yards in the jv match up. 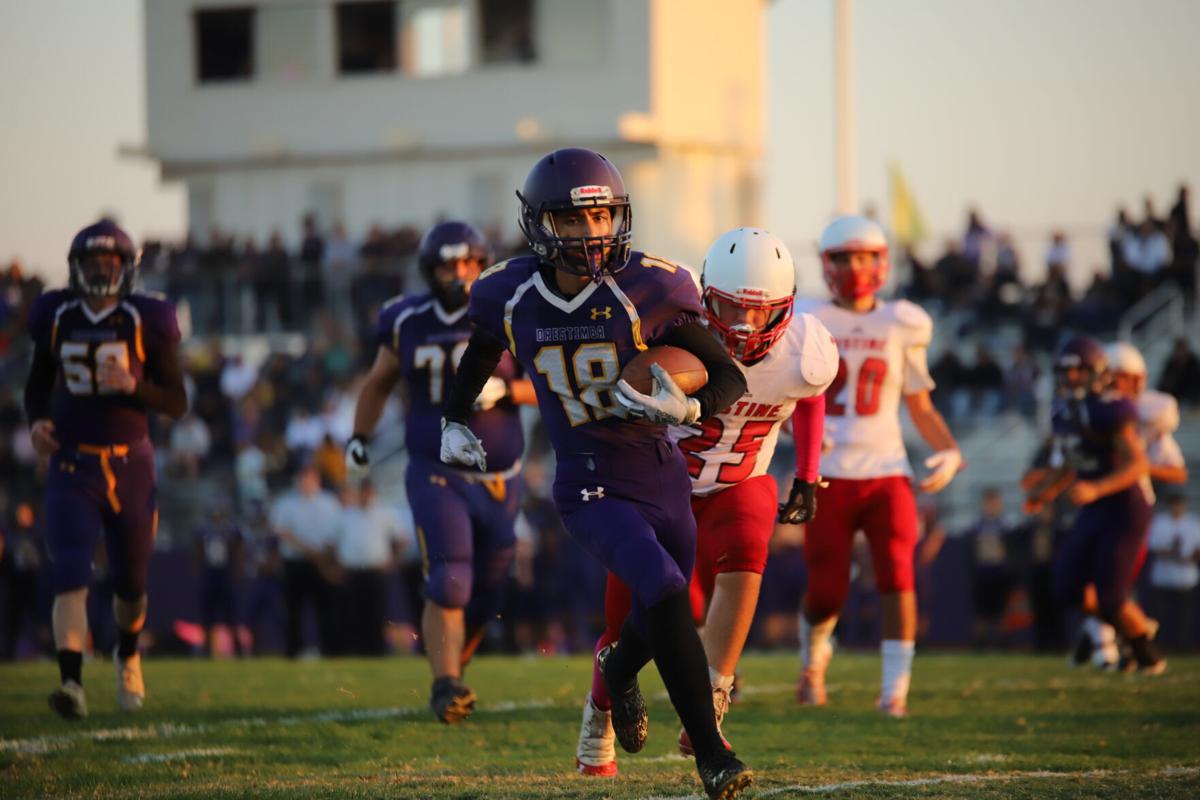 Orestimba’s Luis Bonilla was headed to the end zone with a full head of steam as Reds defender Austin Etheridge (25) chased from behind.

Mateo Navarro (11) from OHS locks in on the text book tackle as Danny Quezada tries to escape with a stiff arm.

Gustine’s Mike Saaranzin looks for some running room during his kickoff return attempt.

Reds running back Joshua Garcia (1) looks to make a move on Drew Felber (20) to pick up a few more yards in the jv match up.

Orestimba’s Luis Bonilla was headed to the end zone with a full head of steam as Reds defender Austin Etheridge (25) chased from behind.

Orestimba and Gustine’s frosh-soph teams faced off in a rivalry match up in week 10 as the Warriors came out victorious and also claimed the 2021 Southern Athletic League Championship, while going undefeated in league play.

The JV Warriors built a 39-0 lead at the half a big enough lead where OHS went on to defeat the visiting Gustine team 46-7.

The Warriors dominated the Reds for four straight quarters and only letting up one touchdown from Gustine that was scored way too late in the fourth quarter of the game for a possible comeback. OHS racked up 377 yards on a well balanced offense with 232 in passing yards and 145 in rushing yards on the evening.

The Warriors came out firing from their first offensive possession scoring six straight touchdowns in the first half and leaving their visiting rival still searching for their first strike to the endzone.

It all started from Orestimba’s aggressive kickoff start in the beginning of the game where they caught Gustine off guard with an onside kick that was recovered by the Warriors on their own 49-yard line.

Orestimba’s first strike came from a 35-yard quarterback scramble from Jacob Valenzuela (12 completions on 13 attempts for 232 yards, 48 rushing yards, 1 TD) who was able to find enough running room to the endzone making it 7-0. On Gustine’s next offensive possession they were forced to punt the ball from just outside their endzone, but Orestimba’s Nicolas Cuevas (6 tackles, 1 blocked punt, 1 TD) was able to block the punt and recover it in the endzone extending the Warriors lead to 13-0.

With another Reds punt came another Orestimba touchdown. The Warriors were able to move the ball and put themselves into great field position allowing Valenzuela to connect with Drew Felber in stride on a 10-yard passing play increasing the score to 19-0.

The Orestimba stifling defense once again was able to shut down the Gustine offense causing the third straight punt from the Reds. On the next offensive possession for Orestimba Valenzuela was able to find Nathan Archuleta on a 46 yard pass to the back of the endzone to stretch the Warriors’ lead even more to 25-0 ending the first quarter.

Midway through the second quarter with a punt from the Reds the Warriors were able to capitalize and bring out the ball to the Reds own 29-yard line. This set up OHS for a 5-yard Valenzuela passing touchdown to Luis Bonilla putting them up even more 32-0. The Reds found some momentum on their next set of down but failed on a 4th down attempt giving the Warriors the ball back and another touchdown connection from Valenzuela to Mateo Navarro on another passing attempt taking them into the break with a score of 39-0.

“In that first half they just got out played and it’s just that simple,” said head Reds coach Ronnie LaBry. “For our offense we just struggled to throw the ball, we dropped too many passes, and turnover on way too many possessions.”

As for Orestimba head coach Mario Martins shared his thoughts about his success in the first half.

“Offensively, we had another great night by spreading the ball around and getting a bunch of guys involved to total just over 300 yards of total offense, said Martins. “Defensively, we had another solid night of football. We never let Gustine get in rhythm all night long. We forced them to kick deep out of their own territories a countless amount of times, which gave our offense great field position all night long.”

Midway through the second half the Warriors would score their final touchdown when Juan Esquivez (103 total yards, 1 TD) scored on a 15-yard rushing touchdown taking Orestimba lead to 46-0.

However, in the fourth quarter the Reds would ruin the Warriors shut out when they scored on an 18-yard passing play from quarterback Alex Lugo hitting receiver Mike Saaranzin for the score but that would not be enough to bring them back into the game as time expired with the final score of 46-7.

“We had a great year going undefeated in league, and a bunch of these kids worked hard and never gave up, which lead to us getting progressively better throughout the season,” said Martins. “I felt as if we could play against any team and these kids earned it all. It wasn’t easy but we were all able to pull together through the hard times and get it done in order to have a successful team”

For the defense Derek Rosas had five tackles, while Jacob Mar and Ariel Medina each record four tackles.

Gustine finished their season in a strong fought matter but struggled with being young and inexperienced while improving as the season went on.

LaBry shared, “After a few bad plays lack of effort was seen at some points, and along with that we are a very young and an inexperienced team. This off-season we have got to learn that in the off time that’s where it starts and we’ve got to take it serious to be successful. But overall these guys played a lot better than their last game, we just got to get better.”