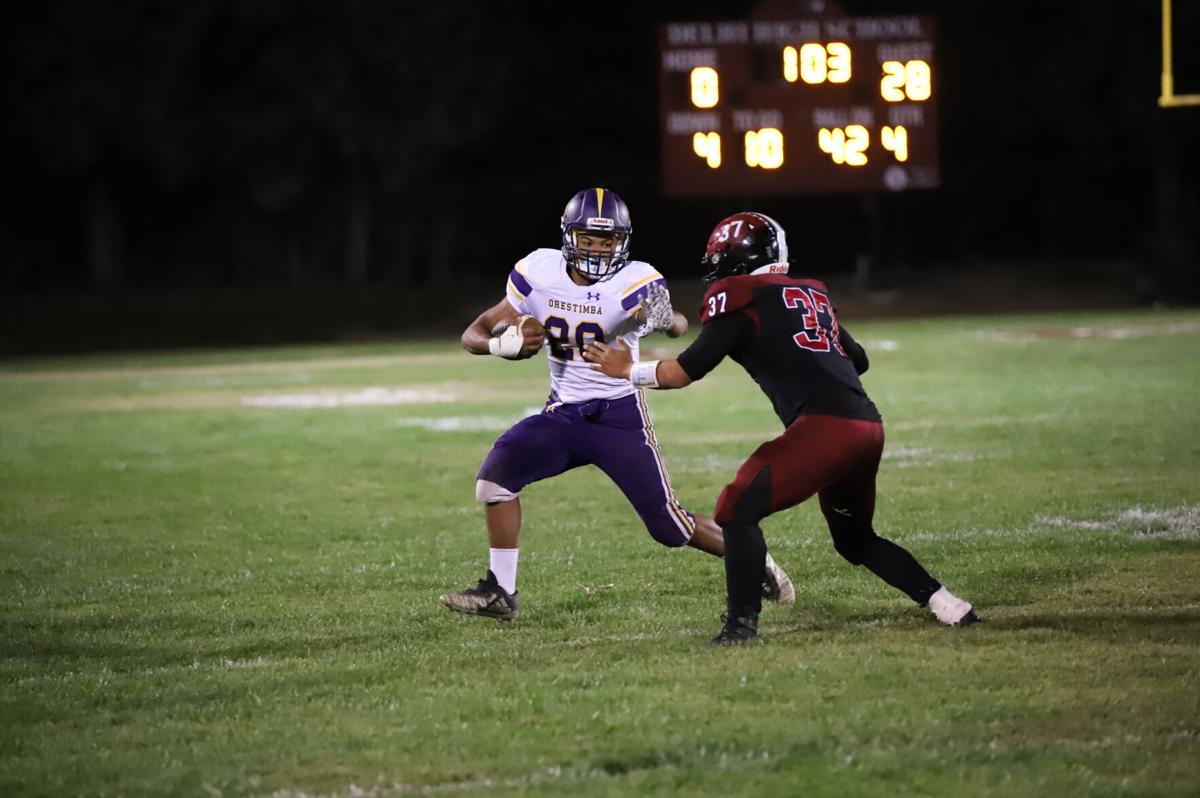 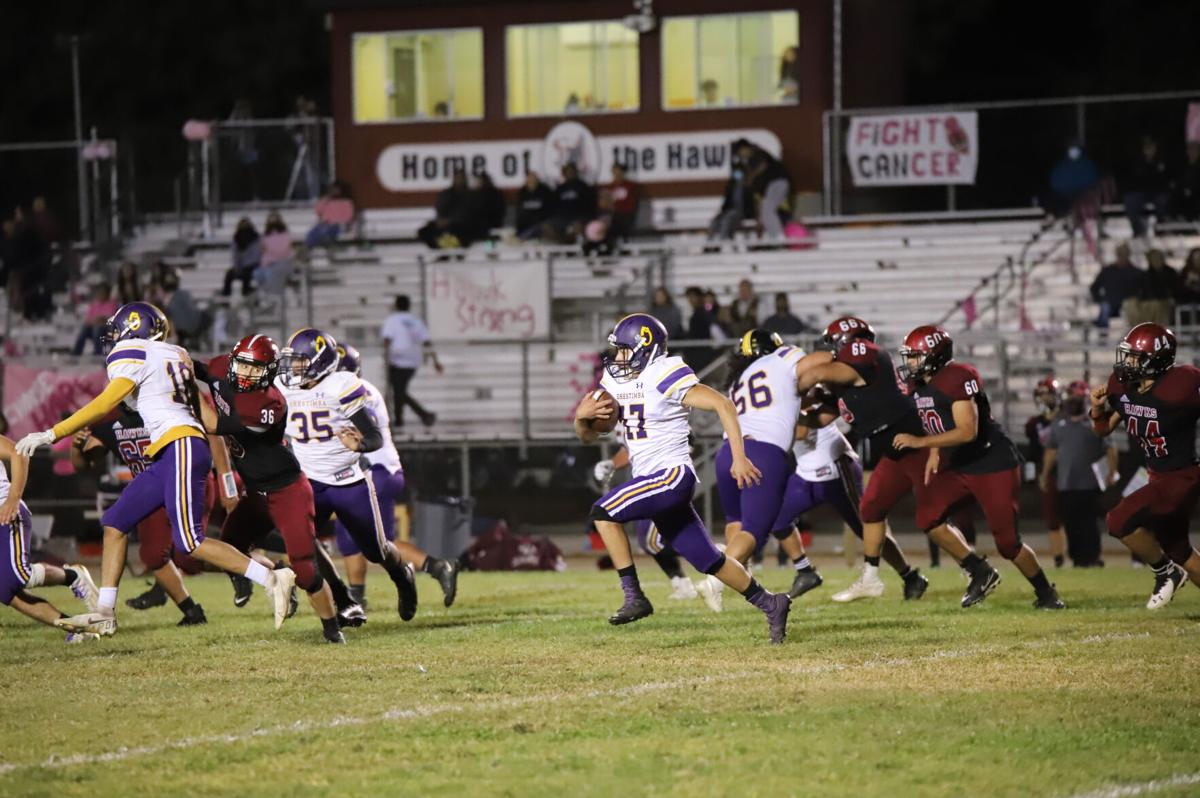 Linebacker Angel Navarro looks for blockers after intercepting the ball. 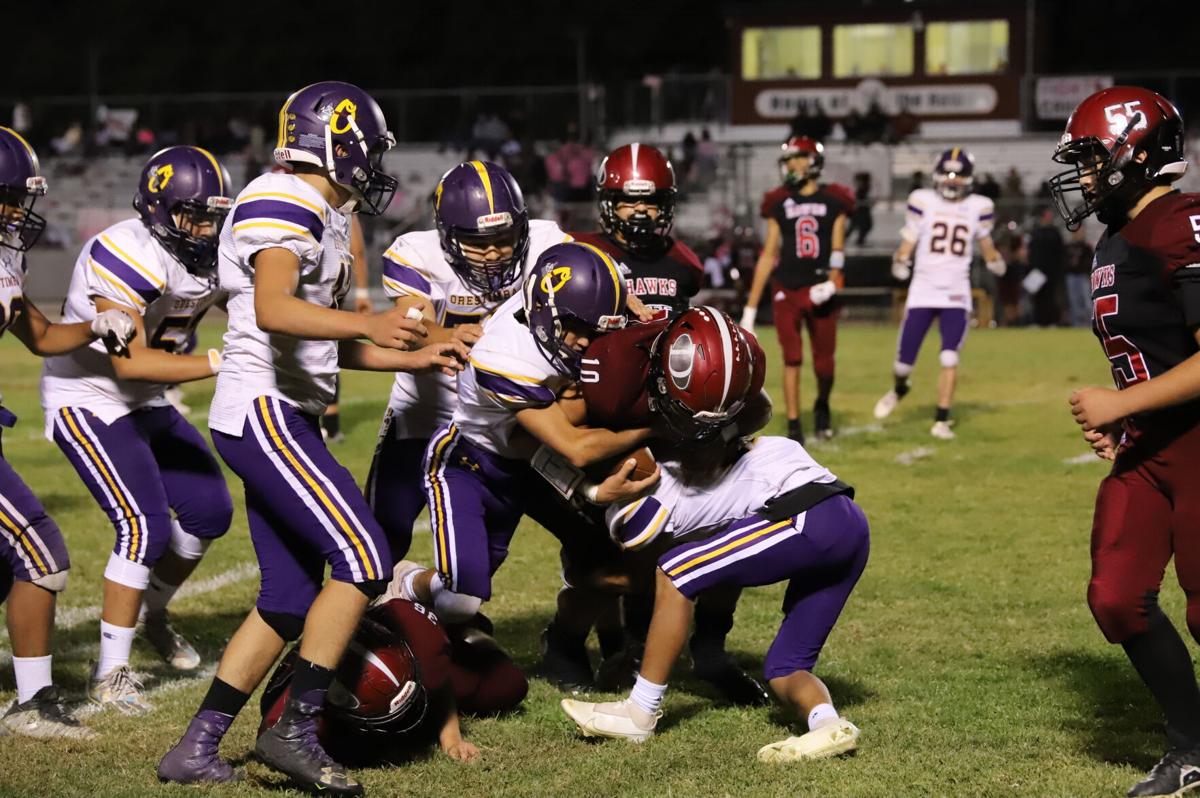 A hord of Warriors tackle a Delhi Hawk ball carrier.

Linebacker Angel Navarro looks for blockers after intercepting the ball.

A hord of Warriors tackle a Delhi Hawk ball carrier.

In Friday night’s match up the Warriors came home with a 28-0 shutout win after traveling to the host Delhi Hawks, who struggled all game to punch it into the endzone due to the Orestimba’s hard nose defense.

The defense as a whole came ready to play from the start of the game, racking up nine tackles for losses, one interception and multiple tackles on the night to prevent the Hawks from entering the endzone.

As for the opposite side of the ball, the game was well balanced through the air and on the ground for the Orestimba offense. Junior quarterback Vincent Lopez (4 completions on 10 attempts for 81 yards, 2 TD; and 10 rushes for 200 yards, 2 TD) took control and led in this game by throwing two touchdown passes and rushing for two of his own contributing to the Warriors’ victory.

“Our kids did a great job of being focused at the task at hand and understanding how important the clock would be, we were able to force them to punt and give our offense chances to score,” said head coach Aaron Souza.

The Warriors now improve their record to 2-2 in league and 4-3 overall sitting in the fourth place ranking in the Southern League.

Starting off in the first half of this game the Delhi Hawks (2-4 overall; 0-4 SAL) came  with their unusual offense by bleeding out the game clock and contributing heavy in the run game, but came up short with no score at all. As for the Warriors, their first score came in the second quarter when Lopez connected on a 45-yard passing play to Nathan Richards. The extra point was good as the time expired into the break with a score of 7-0.

With Delhi still trying to find their rhythm in the second half, the West Siders came back with some scores of their own. When Lopez found some running room to the outside and scored on a 39-yard quarterback keeper. A few plays down the line the Warriors came back once again with a score as Lopez hit Julian Perez in stride for the 28-yard passing touchdown. With these two scores it brought the Warriors to a 21-0 score to end the third quarter.

At the start of the fourth quarter the Warriors were in full control and ready to bring  home the victory. Mid-way through the quarter Lopez once again scored on a quarterback keeper going 66 yards to the endzone to end the scoring for the Warriors and to close out the 28-0 game.

“We had a slow start on offense, but scored a crucial TD right before the half and then we turned it on in the second half. Also Vince Lopez continues to be a spark and leader for us offensively. I liked the way our offensive line played in the second half,” Souza said. “The defense as a whole did a great job of flying to the football and doing their assignments. Angel Navarro had a big interception late in the third quarter that helped us fully take control of the game.”

As for the defense, Julian Perez and Joseph Flores led the way with five tackles each as Flores also contributed five tackle for losses. Brazil had three, as Julian Contreras, Pedro Barajas, and Tristan Brace each chipped in two. Angel Navarro contributed with a huge interception.

This upcoming week will be a challenge for the Warriors as they will be on the road once again facing off against the Waterford Wildcats (7-0 overall; 4-0 SAL) who are currently the Southern League leaders. Game time starts at 7:15 p.m.

“This game will be a great opportunity for our team and program as a whole. This will be a marquee small school match up locally this week and we are excited for the challenge. It is Waterford’s homecoming and along with their 7-0 record, the place will be rocking,” said Souza. “Our team is full of confidence at the moment as we need to avoid a slow start and just keep making plays, doing all we can to be able to have a chance to win this game late in the fourth quarter. It will be a great football game all around.”