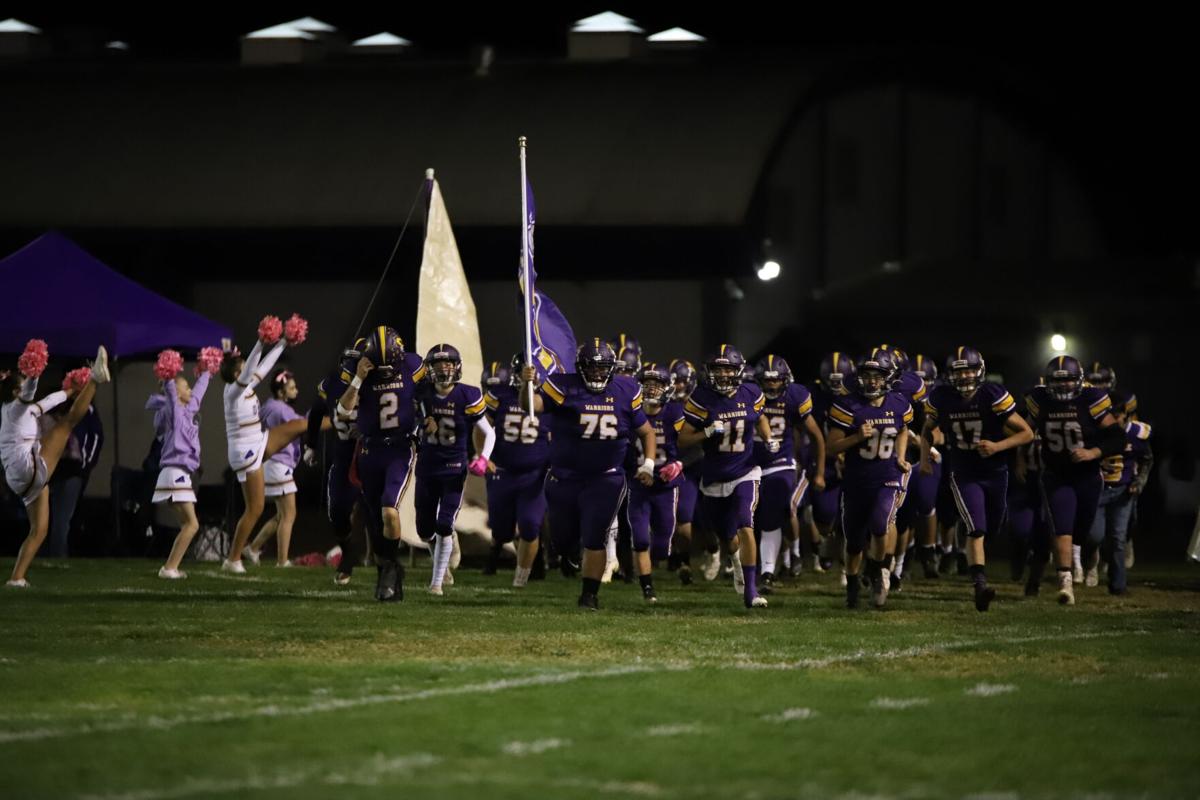 The Warriors rush through their banners coming back to the field from their half time break. 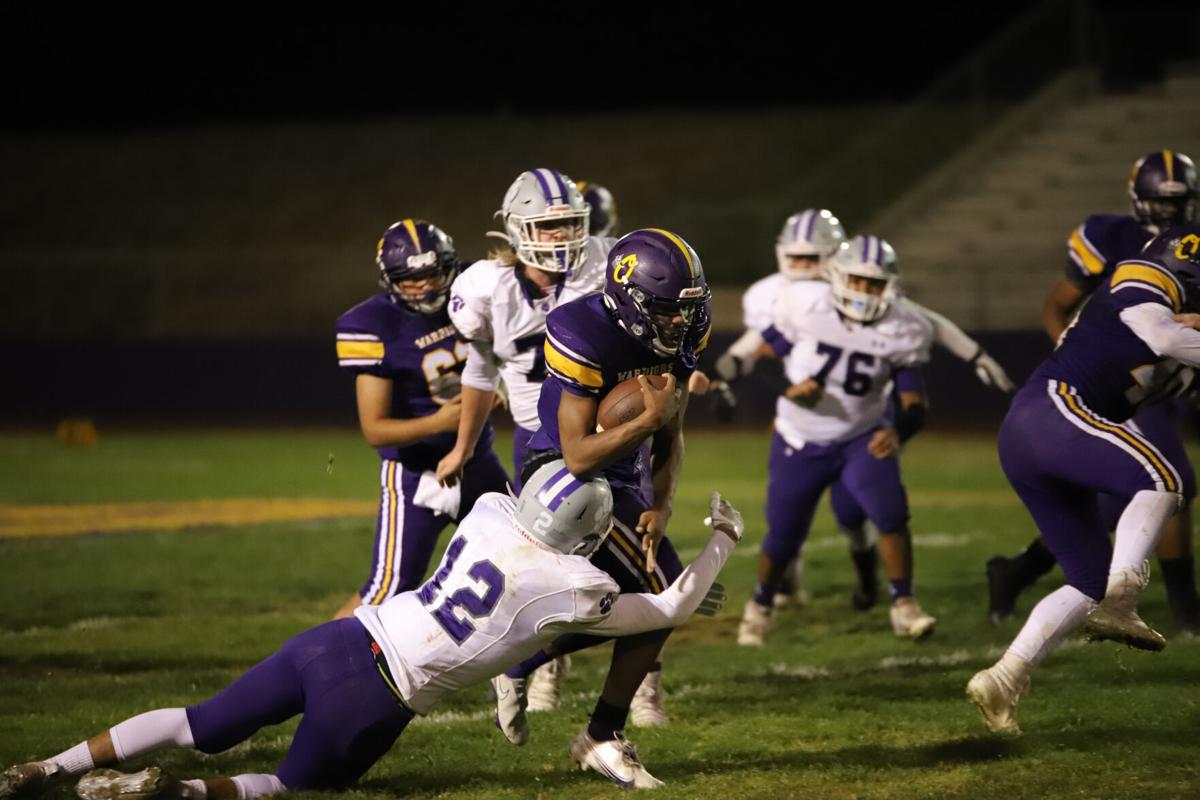 Lead rusher of the night Lazs King looks to run through his defender during Orestimba’s 39-0 win over Denair. 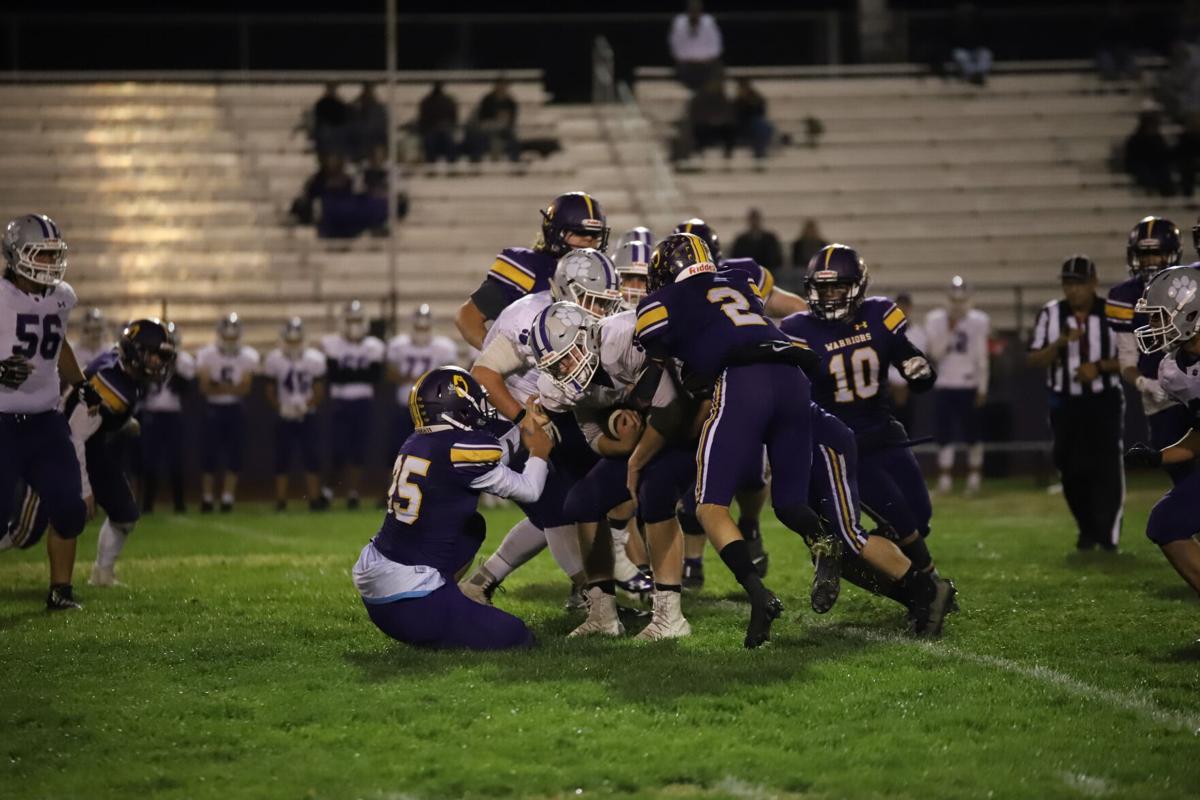 A squad of Warriors crush a Denair coyotes ball carrier. 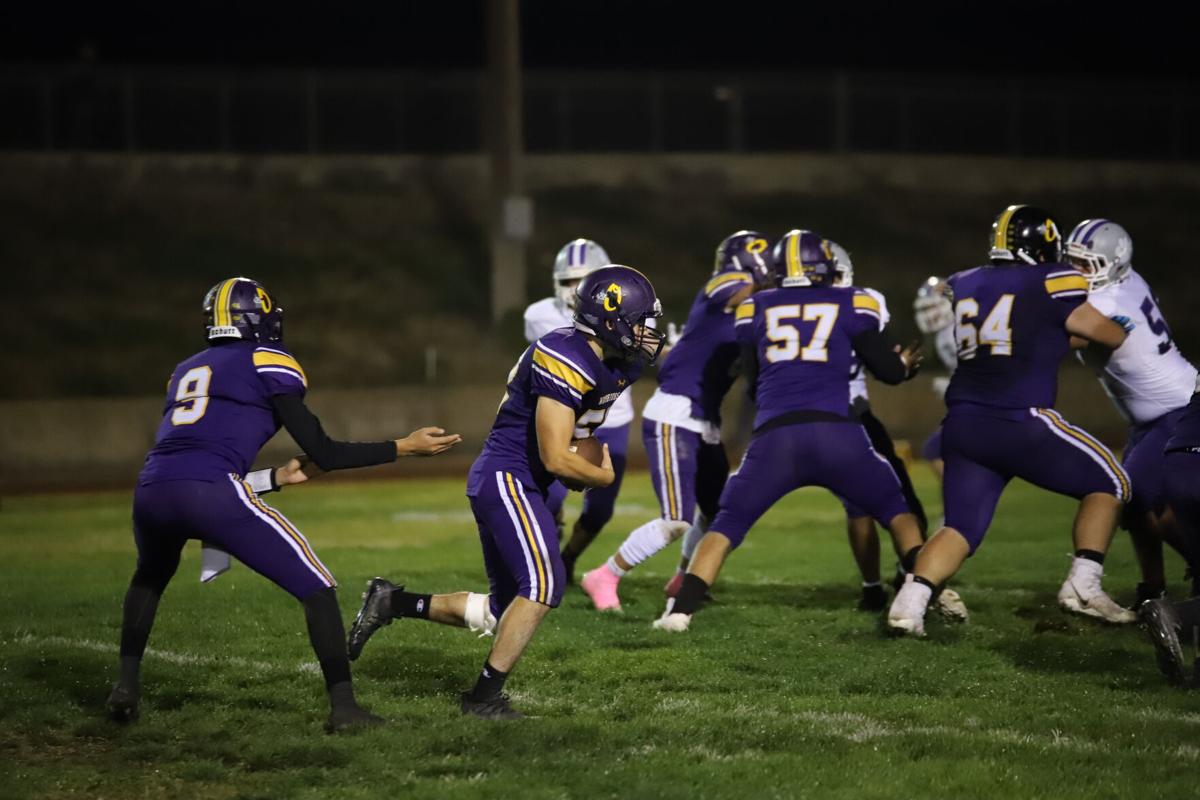 Gerardo Torres got some reps at running back last Friday night during the Warriors homecoming game.

The Warriors rush through their banners coming back to the field from their half time break.

Lead rusher of the night Lazs King looks to run through his defender during Orestimba’s 39-0 win over Denair.

A squad of Warriors crush a Denair coyotes ball carrier.

Gerardo Torres got some reps at running back last Friday night during the Warriors homecoming game.

It was homecoming night for the Orestimba Warriors and they dominated the visiting Denair Coyotes (0-7 overall; 0-5 SAL) in three straight quarters and put  up five touchdowns just in the first half coming away with a 39-0 shutout.

The Warriors came off a 61-35 loss to the league leaders Waterford two weeks ago and came into this game with a whole new demeanor and the hopes of improving their record at an even 3-3 in the Southern League.

In total offensive yards the Warriors put up 314, with 103 yards in the air passing while 211 on the ground rushing. It was a good balance between the two that lead them to the victory Friday night.

The Warriors enhanced their recorded to 5-4 overall and 3-3 in the Southern League.

Lazs King (7 carries for 74 yards, 3 TD) had a great offensive day scoring all three of his touchdowns in the first half — two in the first and one in the second quarter. King scored on a 10 and 14-yard rushing touchdown in the first quarter to put Orestimba at a 14-0 lead at the end of the first.

The start of the second quarter saw King score his third touchdown of the day on a 4-yard rushing score that was set up perfectly in the redzone by the Warriors offense. The score increased their lead to 20-0.

The Coyotes would fall into more trouble resulting in another turnover on downs.

Orestimba would capitalize on mishaps from the Coyotes resulting in two scores in the final minutes of the second quarter. The first score would come from a huge 65-yard rushing play from Kai Brazil (3 carries for 98 yards, 1 TD). Their next one would come from a 46-yard connection from quarterback Vincent Lopez to senior receiver Jayden Vargas (5 reception for 91 yards, 1 TD)  increasing their lead to 33-0 into the half.

“At the beginning of the game it was a slow start and we ran into trouble by doing too much and allowing them to gain too many yards on us. But we were able to tighten up and settle down and dominate this game,” said head coach Aaron Souza. “Also it was great to see our backs Lazs King and Kai Brazil get back on track and score for us and run like they know how to.”

Returning from the half the Warriors would score their final touchdown of the night on a 14-yard Lopez run splitting the defense into the endzone. The ended the scoring frenzy for the Warriors with a final score of 39-0

“During this game we gave up more yards than I wanted to, but we did eventually shape up and we did what we had to do to win this game.” said Souza. “Overall it was a great performance on both sides of the ball; everyone was flying to the ball on defense and doing their jobs on offense.”

Vincent Lopez (6 completions on 9 attempts for 103 yards, 1 TD) was another key contributor to the Warriors’ successful offensive night.

Next up for week 10, the Warriors will be up against their rivals from down the road, the Gustine Reds (3-5 overall; 3-3 SAL) — a match up that dates all the back to 1947 for these two teams. This will be the 75th anniversary with the series all tied up evenly at 36 a piece and two ties. This will be a great match up between the schools who run two different offenses with Orestimba being excellent in the air, while Gustine finds their success on the ground. Game time for the two begin at 7:15 p.m. at the Rodger “Coach” Pauletto Field.

“This game means a lot to everyone in both of these communities and it’s for the ultimate bragging right for life for both teams’ seniors. Coming into this game the pass seven years the game has always come down to a final score and that always makes a good game,” said Souza. “This week I’m going to emphasize to my team that we need to stop their run because that’s what they are good at. While also their great staff is going to prepare and scheme for us just like we are doing them and overall this is going to be a great game.”