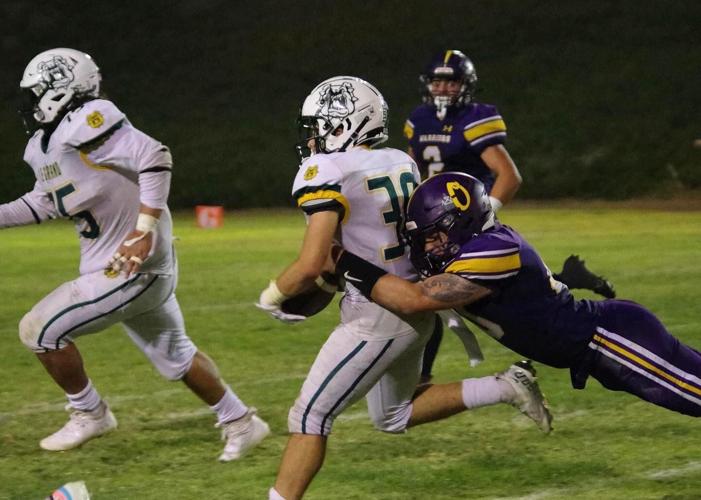 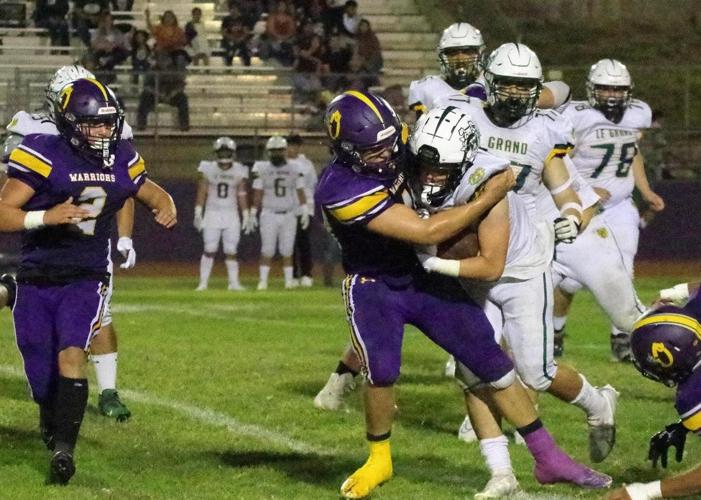 An Orestimba player makes a tackle during the Warriors 21-14 win over Le Grand in the Southern League opener for both schools Friday.

An Orestimba player makes a tackle during the Warriors 21-14 win over Le Grand in the Southern League opener for both schools Friday.

The Bulldogs are the reigning Sac-Joaquin Section Division VII champions. With them in the rear-view mirror, the Warriors can now turn their attention to this week’s opponent: Ripon Christian.

“If you look back since we both entered the Southern League in 2014, we’ve had one-score games across the board,” said Orestimba head coach Aaron Souza. “It’s become a great rivalry.”

Though it has indeed become one of the best small-school matchups in the region, it’s been one-sided of late. The Warriors’ last victory over RC came in 2017, when they won their third in a string of three consecutive SL championships.

The win against Le Grand allows the Warriors to remain in control of their Southern League destiny.

Last week against the Bulldogs, Orestimba scored as time expired in the first half for a second consecutive game.

With four minutes to play in the opening half, Drew Felber intercepted a Le Grand pass, but the Warriors gave it right back on the next play when Alex Millan threw a pick near midfield. LG scored to go up 14-7 with 17 seconds left in the half — a momentum shift that could have been fatal in a defensive battle such as Friday’s.

Drake Perez fielded the ensuing kickoff at the 8 and returned it 92 yards for what appeared to be the tying score, but a block-in-the-back infraction brought the ball back to Le Grand’s 46.

Orestimba lined up for one final play.

The Bulldogs rushed Millan hard, but the senior quarterback stepped up in the pocket and unleashed a spiral that fell into the hands of an open Felber in the seam, and the teams were deadlocked at intermission.

With one minute to play in the third quarter, Millan and Felber connected again, this time from 42 yards out, to make it 21-14.

The remainder off the game was a defensive struggle. The ’Dogs had first-and-goal at the 5, but the Warriors were able to keep them out of the end zone. On second down, Le Grand was flagged for intentional grounding, which made it third-and-goal from the 15 after the loss-of-down infraction. On fourth down, the Bulldogs passed up a field goal attempt and were kept out of the end zone.

“Our defense bent, but it didn’t break,” said Souza.

Warriors free safety Vince Lopez intercepted a pass that bounced off two other players before falling into his mitts with 2:22 to play.

Orestimba was able to run out the clock from there.

“Coming off a bye helped us big time,” said Souza. “We were able to get healthy and avoid the crisis-management that we would’ve had to do with the heat. We were able to do some film work and indoor lifting. It really helped us.”

Orestimba’s first touchdown of the night was a 25-yard hook-up from Millan to Nathan Archuleta.

All told, Millan completed 10 of 17 attempts for 181 yards. For the season, the 6-1, 180-pounder is completing 59 percent of his tosses with 17 touchdowns and just five interceptions.

Sorry, there are no recent results for popular images.