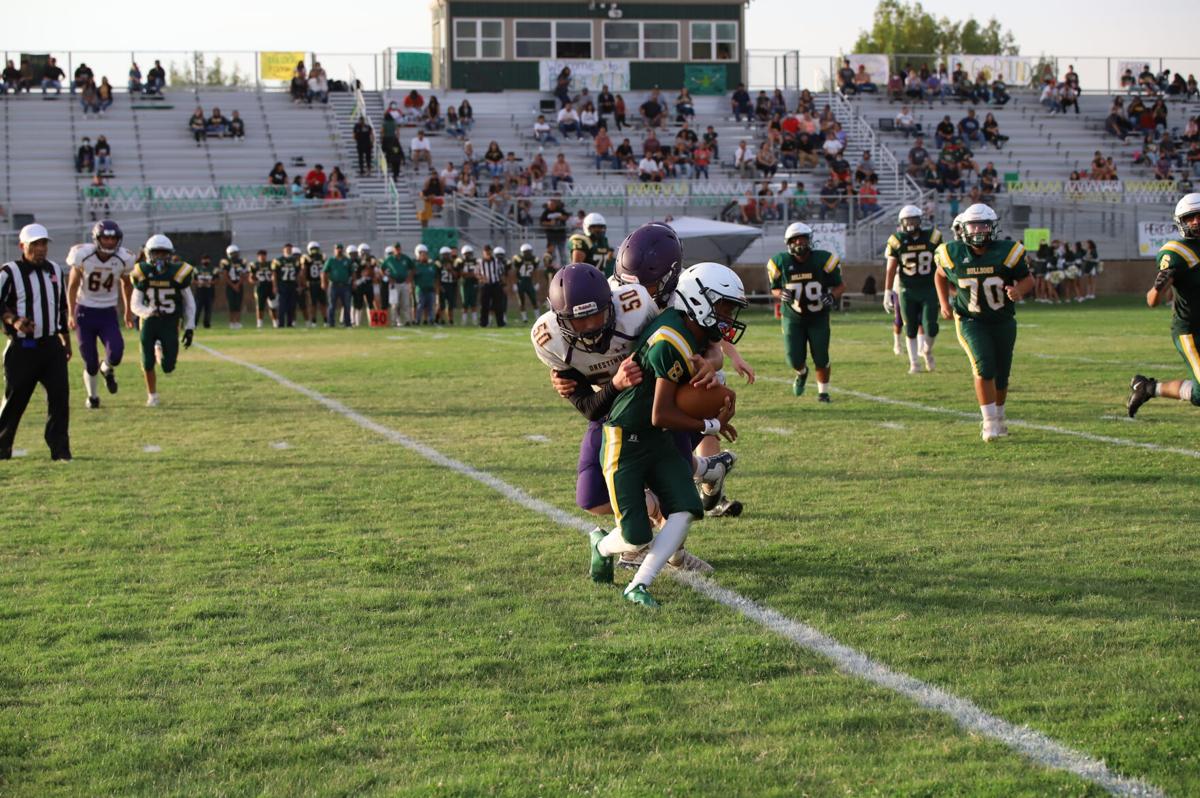 Derek Rosas makes a tackle on a Le Grand ball carrier, during the Warriors 44-7 win. 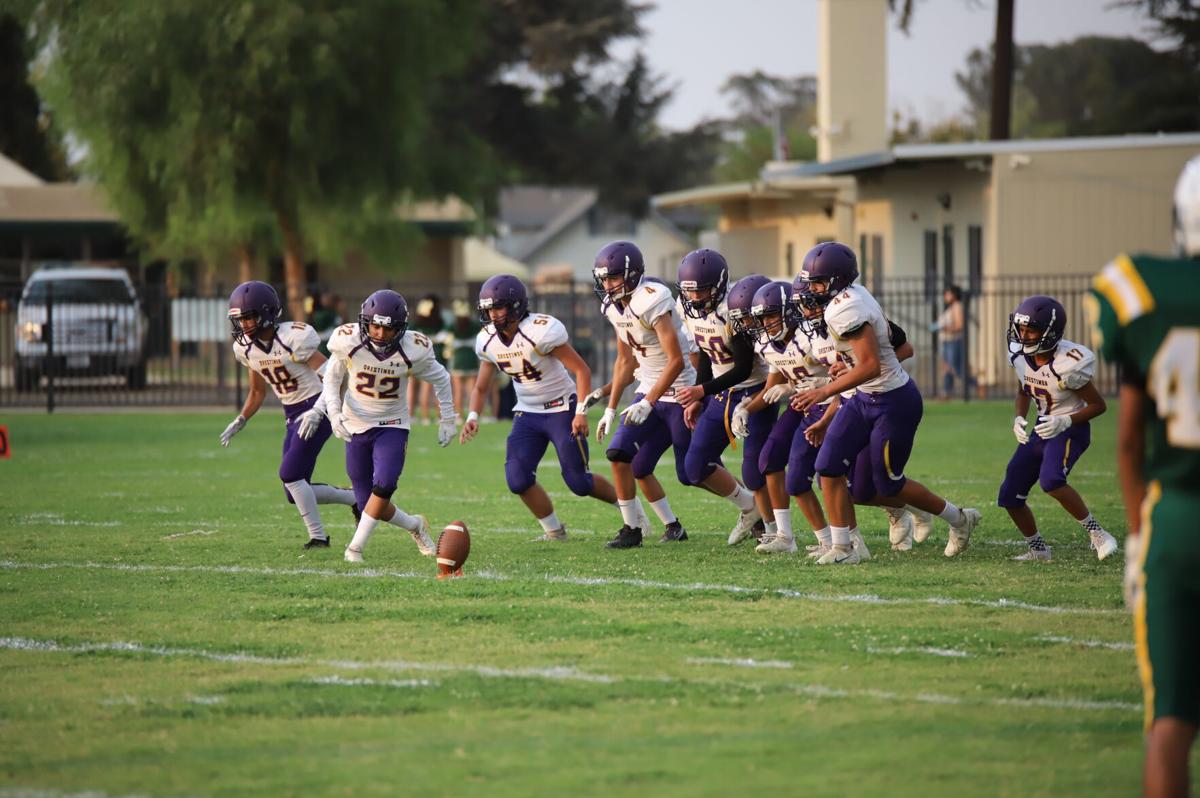 The Warrior gather together and run up to kick off during their Friday evening game.

Derek Rosas makes a tackle on a Le Grand ball carrier, during the Warriors 44-7 win.

The Warrior gather together and run up to kick off during their Friday evening game.

The JV Warriors improved their record to 3-1 and 1-0 in Southern League play as they lit up the scoreboard Friday evening in Le Grand.

Returning from a bye last week and looking to continue the win streak after two weeks ago beating the Los Banos Tigers 20-0 at home, the Westsiders did just that with great playing from both offense and defense, which resulted in a score of 44-7.

The JV Warriors got started very early on in the game. On Orestimba’s first offensive ball possession of the game they had a couple of nice runs by Sophomore Jacob Mar, who got them set up inside the redzone. In the next set of downs Mar ran it in from one yard out for the touchdown. The extra point was good giving the Warriors an early 7-0 lead.

Orestimba’s ripping defense quickly forced a Le Grand punt, giving the Warriors the ball on Le Grand’s own 45-yard line. Mar once again got himself going when he took a hand-off and ran 20 yards down field to put the Warriors in great field position. On the next set of downs Mar finished the drive with a hand-off to the endzone. The extra point was missed, putting the Orestimba lead up 13-0.

After a few back and forth swapping of ball possessions, Le Grand was looking for their first scoring opportunity as they drove the ball down the field into Warriors territory. On a great defensive play, Ariel Medina stepped in front of a pass and ran it back 28 yards to give the Warriors back the ball. On the next play a 10-yard hand-off to Juan Esquivez extended the Westsiders lead 19-0. The extra point was missed.

The Bulldogs avoided being shut out when they took a kickoff return back 86 yards to the endzone, taking the score 19-7 into the break.

With the start of the second half the Warriors did not let up and continued to put on a show for the crowd. Esquivez went to work as he went 20 yards down the field to put the Warriors on the 5-yard line. On the next down he received another hand off and punched it into the endzone. The extra point was missed making it 25-7.

As so did another Orestimba touchdown. Esquivez once again took the hand from quarterback Jacob Valenzuela and went 15 yards for a touchdown to stretch the Warrior lead 31-7.

With another spectacular stop on defense, the Warriors came back ready to put up more points with another great rushing touchdown by Esquivez, making that his third of the evening with just two minutes left in the third quarter. The extra point was missed again, making the score 37-7.

Early in the fourth the Warriors continued to execute the running game on the Bulldogs when Derek Rosas rushed for 44 yards into the endzone for a touchdown. After a successful extra point attempt by Esquivez that concluded the scoring, ending the game with a score of 44-7.

“Offensively, we were able to put a lot of points on the board, but most importantly we stayed pretty balanced throughout the night,” said Coach Mario Martins. “We were able to run the ball well with Esquivez and Mar and also pass the ball with Jacob Valenzuela. Being able to do that keeps defenses guessing and not just keying on one phase of our offense.

“Defensively, we had another successful game and allowed only one score on the board,” Martins said. “We played the run well and in the passing game we came up with two interceptions. This gave our offense the ball back often and in good field position. Our key guys on the night were Esquivez with big plays in the backfield; Nicolas Cuevas being all over the field; and Ariel Medina with two huge interceptions. Jacob Mar also had a great night and recovered a fumble.”

Rosas added his name to the stat sheet when he ran 44 yards and recorded a touchdown. Valenzuela completed eight throws on 13 attempts and he threw for 170 yards and one touchdown.

This week Orestimba will travel to the 3-1 Ripon Knights. They have been one of the toughest teams the Warriors have faced in recent years. The game will kick off at 5 p.m.

“This week we travel to Ripon Christian which has been one of our toughest opponents in recent years in the Southern League,” Martins said. “We always have to deal with their length, good size, and many different formations to keep us off balance.”